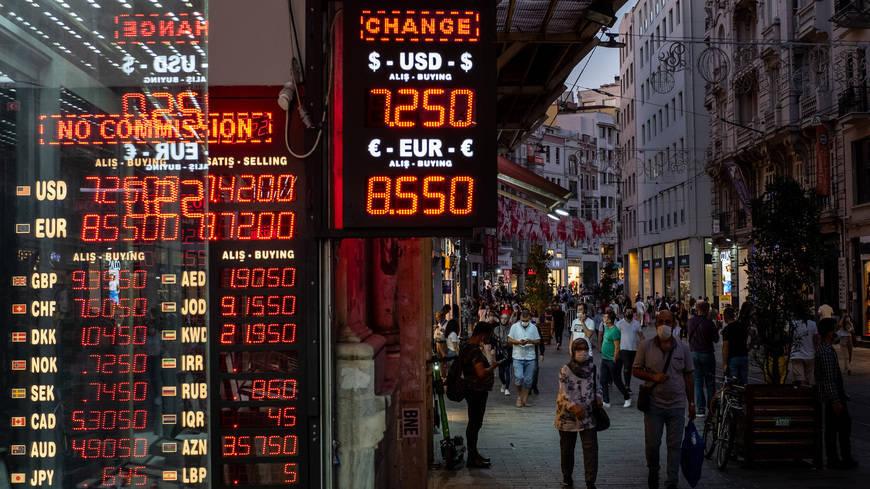 ISTANBUL — The Turkish lira continues its downward slide against major currencies, hitting record lows of 7.63 per US dollar and nearly 9 per euro as of Monday afternoon. The losses come ahead of a highly anticipated Central Bank meeting Thursday in which few analysts expect policy-makers to reverse an easing cycle that’s kept borrowing costs below inflation.

The lira has lost about 21% of its value against the dollar this year as the COVID-19 pandemic continues to impact economies around the world. To date, the Central Bank has resisted pressure to raise key interest rates, instead utilizing “backdoor” tightening policies that have raised weighted-average borrowing costs for funding.

“I believe the recent weakness in the Turkish lira reflects the upcoming Central Bank meeting and concerns regarding its independence,” Selva Demiralp, a professor of economics at Koc University and director of the Koc University-TUSIAD Economic Research Forum, told Al-Monitor.

Ahead of Thursday’s meeting, most economists surveyed in polls by Reuters and Bloomberg said they expected policy-makers to keep the benchmark repo rate steady at 8.25% for a fourth month after a year-long easing cycle that saw the key rate cut from 24%.

Analysts believe such a move could bring about more financial instability as the Turkish economy bears large external financing requirements and a widening current account deficit, spurred in part by credit-driven growth.

“They need to slow the economy down,” Timothy Ash, an analyst at BlueBay Asset Management, told Al-Monitor. The Central Bank needs “to raise the base rate by at least 300 basis points, I think at this stage, to give some credibility to the fight against inflation.”

The weaker lira comes after state banks spent billions in foreign exchange reserves to support the Turkish currency earlier this year. In a report Monday, Goldman Sachs economists said the Central Bank’s ability to intervene in markets “declines in tandem with its foreign currency reserves,” stating, “Monetary policy will need to tighten to slow the pace of imports, encourage inflows and discourage dollarization.”

The news comes after Moody’s cut Turkey’s sovereign credit rating to B2 earlier this month, and shortly after downgraded the ratings of 13 Turkish banks.

Turkish Treasury and Finance Minister Berat Albayrak has said a weaker lira could help make Turkish exports more competitive and boost tourism revenue in the country, but Demiralp said a continued depreciation could prove financially destabilizing “given the sizable external debt of the private sector.”

“As an entity that is in charge of price stability, the Central Bank has to consider an explicit rate hike to show its commitment in defending the Turkish lira and hence controlling the inflation rate,” Demiralp told Al-Monitor.

She continued, “Yet, their first line of defense was an implicit rate hike. Market participants believe that this implicit approach will continue at this week's meeting, which is unfortunately a rather ineffective way to deal with the problems in hand.”

Apart from monetary policies, the Turkish economy faces additional pressure from political developments in the eastern Mediterranean region and beyond. A group of EU leaders, including French and Greek officials, may seek to impose new sanctions on Ankara following a summit this week in which Turkey’s gas exploration activities in contested tracts of the Mediterranean Sea are on the agenda.

“Most people think the EU will be modest in what it does … [but] there’s a risk they can do more,” Ash said, regarding the threat of EU sanctions.

Another variable with high stakes for the Turkish economy is the outcome of the US presidential elections in November. The close relationship between Erdogan and his American counterpart Donald Trump is believed to have delayed sanctions on Ankara for its 2019 purchase of Russian-made S-400 missiles.

Ash said a Trump loss in November could raise questions regarding future ties between Washington and Ankara.

“Trump has been very friendly towards Erdogan,” Ash told Al-Monitor. “He’s guarded him against the US establishment’s desire to sanction Turkey. He’s held off a lot of sanctions. A [Joe] Biden win would suggest a tricky relationship between the US and Turkey.”