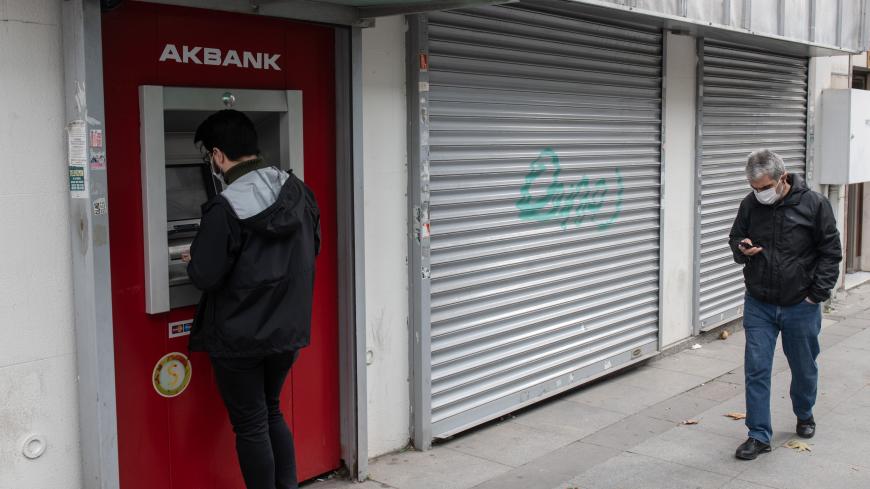 A man uses an automated teller machine at a branch of Turkey's Akbank on Nov. 9, 2020, in Istanbul, Turkey. - Burak Kara/Getty Images

Turkey’s lira rebounded more than 7% since hitting a record low of 8.58 per dollar Friday, scaling back steep losses that placed it among the world’s worst performing currencies in 2020.

In initial comments this week, the pair pledged to combat the nation’s double-digit inflation and pursue predictable monetary policies in effort to stabilize the Turkish economy. Investors are now waiting to see if they follow through with a key interest hike during a monetary policy committee meeting scheduled for Nov. 19.

The move would signal a shift away from Erdogan’s long-held stance that higher interest rates cause inflation rather than reduce it, in contradiction to common economic theory. Yet while speaking to AKP lawmakers in Ankara Wednesday, Erdogan said the new appointees would usher in a new era of stability and that Turkey would “swallow a bitter pill” if necessary to improve the nation’s economic prospects.

“Like everywhere else around the world, in our country it is the Central Bank’s job to determine and implement policies needed to curb inflation,” Erdogan said Wednesday, appearing to suggest tighter monetary policies were imminent.

Such remarks sent Turkish markets soaring this week, following initial gains Monday over news of a surprise resignation by Erdogan’s son-in-law and former Finance Minister Berat Albayrak and the dismissal of former Central Bank Governor Murat Uysal over the weekend.

Though many criticized the Central Bank’s apparent lack of independence under Uysal’s 16-month tenure, he oversaw policies that held interest rates low while implementing backdoor measures to increase real borrowing costs. At the same time, Albayrak reportedly encouraged banks to sell up to $100 billion this year, depleting reserves to support the lira against inflationary pressures.

“The developments we witnessed over the weekend reflected an explicit confession from the government about the failure of the economic policy,” Selva Demiralp, a professor of economics at Koc University and director of the Koc University-TUSIAD Economic Research Forum, told Al-Monitor.

She added, “For the first time, it was acknowledged  that the policies that were adopted in the post-2018 period were problematic and led to a crisis at the government level.”

With a new economy team in place and a change in Erdogan’s tone — after the president claimed Oct. 31 the country was waging war against the “devil’s triangle” of interest rates, inflation and exchange rates — investors appear to be optimistic on the nation’s economic turnaround. Goldman Sachs announced Wednesday it was forecasting an interest rate hike of 475 basis points to 15% in next week’s meeting.

“The government needs to persuade people, investors and international agencies that it’s committed to stricter measures,” Yucel told Al-Monitor. “Some fiscal discipline will be very necessary to reestablish the credibility of the Central Bank.”

With investors awaiting further measures in the days to come, an interest rate hike next week would serve to underline a new policy direction, though Demiralp said a single rate decision would “not be sufficient.”

“The new [finance] minister needs to watch the delicate balance [between] the Central Bank and the president and give room to CBRT to implement proper monetary policy,” Demiralp told Al-Monitor, using the acronym for the Central Bank of the Republic of Turkey.

She continued, “It would be naive to expect a [personnel] change that will establish Central Bank independence. We already passed the point of an independent Central Bank. The fact that the new governor is a former minister already signals the organic relationship between the government and the Central Bank.”