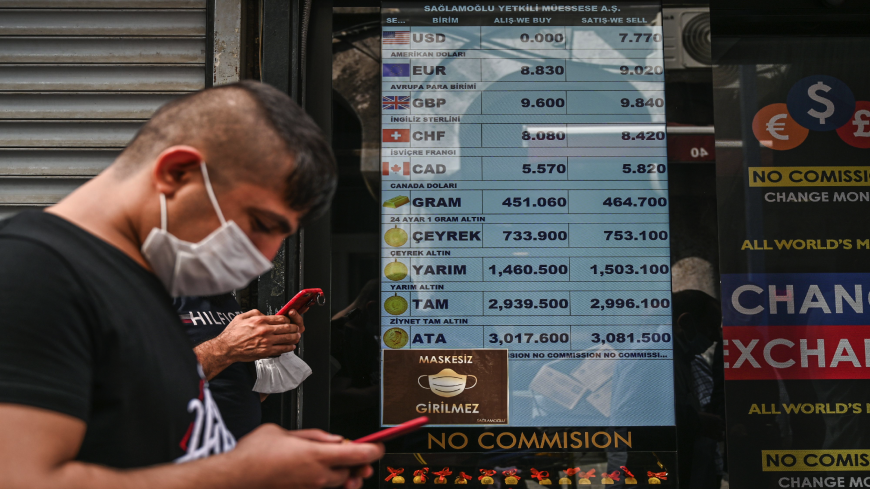 A man holds a smartphone as he walks past a screen showing rates at a currency exchange agency near the Grand Bazaar in Istanbul on Sept. 24, 2020. Turkey's Central Bank on Sept. 24, 2020, raised its main interest for the first time since September 2018, boosting the rate by 2 percentage points to help the lira recover from historic lows. - OZAN KOSE/AFP via Getty Images

In a statement Thursday, Bank’s Monetary Policy Committee announced it would keep its one-week repo rate at 17%, where it stood after two increases in November and December raised the benchmark rate by 675 basis points.

The committee said it would maintain a tight monetary policy stance “until strong indicators point to a permanent fall in inflation and price stability,” while leaving the door open to “additional monetary tightening” if needed.

Turkey’s lira rose about 1% on the news before settling around 7.37 per US dollar at 7 p.m. Istanbul time. In prior polling, most market analysts said they expected the outcome, and the decision bolsters Central Bank Gov. Naci Agbal’s credentials in overseeing mainstream policies that have gained favor with international investors.

Yet Turkey’s annual inflation remains stubbornly high, rising to 14.6% in December, well above the state’s 5% target. Selva Demiralp, a professor of economics at Koc University and director of the Koc University-TUSIAD Economic Research Forum, said Agbal has helped improve financial stability since his surprise appointment in November, but he added that Turkey’s economy was not “out of the woods yet” as investors are waiting to see whether tight monetary policies remain in place.

“Our journey toward the 5% inflation target is going to be a long and tiring one,” Demiralp told Al-Monitor, noting plenty of work lays ahead for the Central Bank in reestablishing its credibility and managing expectations.

Demiralp added, “It is harder to achieve this during the pandemic, but we don’t have much of a choice. Any premature easing would backfire and tighten financial conditions even further.”

High inflation coupled with the global economic slowdown sparked by the COVID-19 pandemic saw the Turkish lira lose about 20% of its value in 2020. The slide caused import prices to rise and sent food costs soaring by as much as 20.6% in Turkey, the highest among countries in the Organization for Economic Co-operation and Development.

Before a shake-up of Turkey’s economic management team in November, state banks spent billions in reserves to bolster the lira while avoiding higher interest rates. Such policies were reversed following the appointment of Agbal, who has since pledged to fight inflation with mainstream approaches while simplifying the Central Bank’s funding structure through the benchmark rate.

Eray Yucel, an economics department faculty member at Ankara’s Bilkent University, said Agbal has taken a more “hands-on” approach to policymaking than his predecessors. He said the decision to hold rates steady Thursday was likely a test to determine whether market sentiments were improving toward the Central Bank, noting many challenges lay ahead for Turkey’s economic recovery plans.

“A glance at international investment positions for Turkey reveals an increase in net liabilities … so this means the fragility of the Turkish economy against the global economy is still there,” Yucel told Al-Monitor.

Yucel said economic activity could strengthen in the coming months as COVID-19 vaccination campaigns are expected to ease social-distancing measures in Turkey and lift pressure off of some commercial sectors. Still, he expressed concern over the many nonperforming loans held by private companies, which have struggled to make payments with a weakened lira, as well as challenges in the revitalization of Turkey’s manufacturing sector.

“Whether they listen or not, I’ll continue my struggle,” Erdogan told a group of business leaders. “There is one thing I believe in: We can’t achieve anything with high interest rates.”

Apart from concerns over political influence in Central Bank policy decisions, some analysts also question the accuracy of inflation data provided by the Turkish Statistical Institute (TurkStat). Wolfgango Piccoli, co-president and political risk analyst at Teneo Intelligence, said some observers believe the inflation rate could be double the official rate.

He added, “Coming clean on the real inflation figure would, however, put the [Central Bank] and Erdogan in a tight spot, as they would have to hike interest rates significantly — a move that would bankrupt many of the heavily indebted firms in Turkey.”

by Murielle KASPRZAK and Joseph SCHMID | AFP | May 26, 2022
END_OF_DOCUMENT_TOKEN_TO_BE_REPLACED