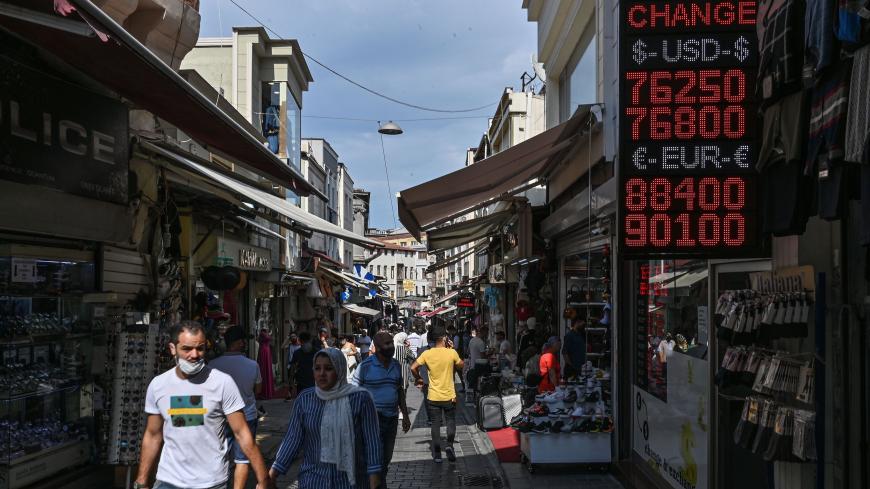 People walk past a screen showing rates at a currency exchange agency near the Grand Bazaar in Istanbul, on Sept. 24, 2020. - OZAN KOSE/AFP via Getty Images

ISTANBUL — Turkey’s new Central Bank Governor Naci Agbal pledged to maintain a tight monetary policy to stem the nation’s double-digit inflation during a videoconference Wednesday in which he outlined plans for 2021.

“We are determined to achieve disinflation,” Agbal said, adding, “In order to achieve this objective we will tighten monetary policy, if necessary. … In 2021, we will maintain a tight stance in monetary policy until there is a lasting fall in inflation.”

Agbal also pledged to rebuild the nation’s depleted foreign exchange reserves next year, reversing his predecessors’ policies that saw about $150 billion in reserves spent over the two years, according to Goldman Sachs estimates, to support the Turkish lira against devaluation.

Investors reacted positively to the statements, with the lira rallying 0.6% Wednesday afternoon to 7.79 per dollar before steadying around 7.82 that evening. The news comes amid a broader monetary policy overhaul, which Agbal promised upon his appointment, pledging to stabilize the Turkish currency after it lost about 24% of its value since the beginning of the year.

Consumer prices continue to rise in Turkey, which saw inflation climb to 14.03% in November led by hikes in food and transportation costs. The Central Bank expects the year-end inflation rate to stand at 12.1% for 2020, and Agbal said the annual inflation target for 2021 would be 9.4%, noting both rates remain well above the government’s medium-term target of 5% inflation.

"Aware of its responsibility in reaching this target, the [Central Bank] will remain determined and resolute over the target horizon," Agbal said Wednesday.

“Maintaining a tighter monetary stance for most of 2021 should help bolster residents’ and nonresidents’ confidence in lira-denominated assets,” Ulku told Al-Monitor. “Higher interest rates will likely be accompanied by stability in the lira exchange rate and a gradual decline in the headline inflation, barring supply-side price shocks.”

In his first policy rate meeting on Nov. 19, Agbal oversaw a 475-basis point hike in the Central Bank’s one-week repo rate, from 10.25% to 15%, and simplified the bank’s funding channels by providing cash, mostly through the one-week repo mechanism.

During Wednesday’s event, Agbal also said policy-makers would end previous strategies of buying foreign exchange or selling transactions to influence the Turkish lira’s market value. He added the implementation of a floating exchange rate regime would continue, and exchange rates would be determined under free market conditions.

Selva Demiralp, a professor of economics at Koc University and director of the Koc University-TUSIAD Economic Research Forum, said Agbal “gave all the right signals” during the videoconference Wednesday, but raised questions over whether the Central Bank would be able to operate independently.

In the past, Turkish President Recep Tayyip Erdogan has voiced support for unorthodox monetary policies that favored lowering interest rates to combat inflation, in contrast to mainstream monetary approaches that advise the opposite.

“One major question that was not addressed is whether Agbal was able to convince President Erdogan that a tighter policy stance lowers inflation and not vice versa,” Demiralp told Al-Monitor. “Otherwise, Erdogan might pressure the Central Bank again to lower interest rates in an attempt to decrease inflation.”

On the issue of rebuilding foreign exchange reserves, Agbal said the Central Bank would present more detailed plans in the near future, stating he also would work to curb high rates of dollarization among Turkish consumers seeking to protect their assets from market fluctuations.

“Continuing with effective communication and predictable policy implementation within a simplified policy framework should help Turkey to attract sufficiently large net inflows of nonresident capital, which would then allow the Central Bank to start FX purchase auctions and to build up its FX reserves in 2021,” Ulku told Al-Monitor.