Turkey’s annual inflation unexpectedly dropped to 16.59% in May, according to data published Thursday. The news did not steady the nation’s currency, which slid on market concerns over an early interest rate cut. 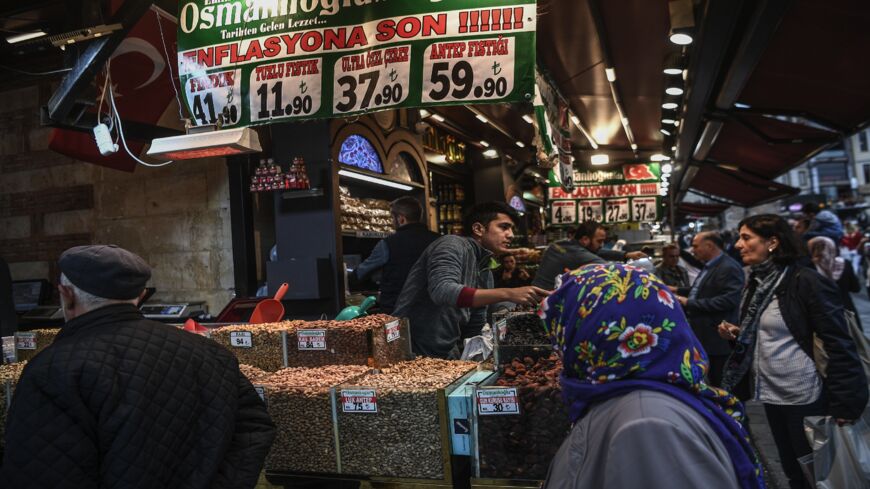 Vendors sell dry food as people shop by a banner reading "No to Inflation" near the New Mosque area in Istanbul's Eminonu district on Nov. 6, 2018. Inflation in Turkey surged to over 25% in October from the same period the year earlier, the highest annual rate for over 15 years, official statistics showed on Monday. Prices have soared in Turkey over the last months as the lira came under pressure, stoking fears over the long-term economic health of the country. - OZAN KOSE/AFP via Getty Images

ISTANBUL — Bucking a seven-month trend of steady increases, Turkey’s annual inflation rate fell slightly in May, catching forecasters by surprise after many projected another rise for the month.

According to data published Thursday, the nation’s year-on-year inflation dipped to 16.59%, down from 17.14% in April. The unexpected news raised concerns policymakers might bow to pressure from Turkish President Recep Tayyip Erdogan and cut key interest rates early, which translated into the lira sliding more than 1% on the day, trading at 8.71 per US dollar at 4 p.m. Istanbul time.

Initial reactions to the nationwide lockdown to stem the spread of COVID-19 in the first half of May could have limited consumer price increases, though market analysts said the dip could be a one-off event amid greater economic noise caused by the pandemic.

Meyersson added, “Inflation expectations are unlikely to re-anchor in the short term, which means the exchange rate, as well as inflation, will remain volatile.”

Timothy Ash, an analyst at BlueBay Asset Management, also noted a widening gap between the nation’s consumer price index and the producer price index — which rose to 38.33% on an annual basis in May, up from 35.17% in April — saying producer cost pressures would eventually be passed on to shoppers.

“The way the markets are interpreting [the data] is with a bit of disbelief, really, because everything is suggesting inflation should be going higher,” Ash told Al-Monitor.

The news comes after Erdogan reiterated calls Tuesday for Turkey’s central bank to cut its main interest rate, rattling investor confidence and sending the lira down 3% Wednesday to a record 8.8 against the US dollar.

“It is imperative that we lower interest rates,” Erdogan said during an interview Tuesday with state broadcaster TRT, suggesting a rate cut might be appropriate in July or August.

Central bank governor Sahap Kavcioglu sought to soothe market concerns Wednesday regarding premature easing policies, telling Turkish media outlets such expectations were “not based on just reasoning.” He said the bank’s Monetary Policy Committee would remain focused on reeling in consumer prices, adding that the main interest rate would remain above the annual inflation rate in the months to come.

Kavcioglu had previously said inflation would peak in April, predicting consumer prices would undergo a significant downward trend in the third and fourth quarters.

"We expect a strong upward trend in exports, a significant decline in gold imports and a slowdown in retail loans to support an improvement in the external balance," Kavcioglu said Wednesday.

Turkey’s main interest rate has stood at 19% since March when former central bank head Naci Agbal hiked the rate by 200 basis points on promises of tighter monetary policies to decrease inflation. Days later, Agbal was replaced by Kavcioglu, a move that saw many international investors recoil from Turkish markets, sending the lira down 16% against the US dollar since late March.

Like Erdogan, Kavcioglu has criticized high interest rates and many analysts expected him to slash them, though he’s so far kept rates steady in the first two policy meetings under his leadership. Still, some believe Thursday’s inflation data and Erdogan’s statements on Tuesday could raise pressure on Kavcioglu to act.

“Rate cuts during the summer seem quite likely,” Meyersson told Al-Monitor. "Premature rate cuts, in the eyes of investors, were effectively why Kavcioglu was appointed. … So at this point, if Erdogan says rate cuts are coming in ‘July or August,' then that's probably what's going to happen.”