Cornered by rising inflation and a weakening currency, Turkey’s Central Bank kept its benchmark interest rate steady at 19% on May 6 as policymakers await positive signals. 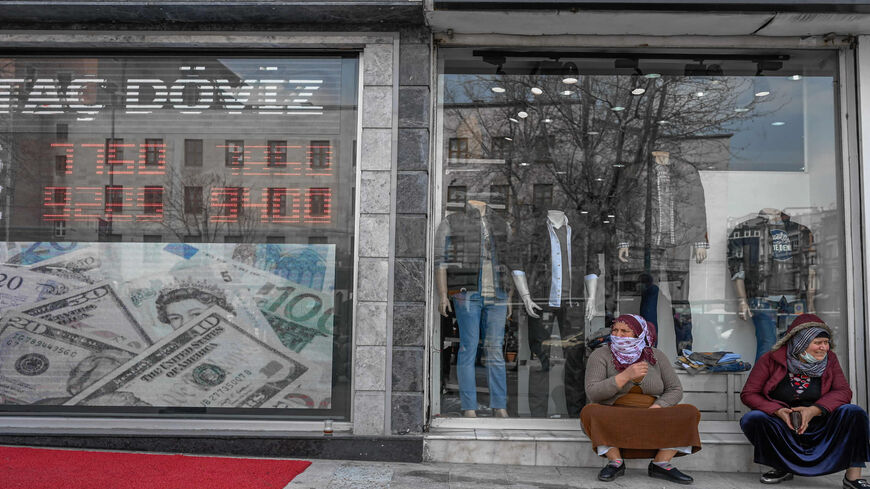 Women sit next to an exchange office at Laleli in Istanbul, Turkey, March 22, 2021. - Bulent Kilic/AFP via Getty Images

Economy and trade
Turkish economy
May 6, 2021

ISTANBUL ­­— Turkey’s Central Bank policymakers kept interest rates steady May 6 for a second meeting in a row, seeking to keep them above the nation’s rising inflation and anchor the Turkish lira after a recent slide.

In a statement issued with Thursday’s decision, the bank’s Monetary Policy Committee said it would hold its benchmark interest rate at 19% and keep the stance until a “significant fall” in inflation.

“The policy rate will continue to be determined at a level above inflation to maintain a strong disinflationary effect until strong indicators point to a permanent fall in inflation and the medium-term 5% target is reached,” the committee said in its statement Thursday.

Turkey’s annual inflation rate rose for the seventh consecutive month to 17.14% in April, up from 16.19% in March, according to a report released Monday by the Turkish Statistical Institute.

With the decision to hold rates, the new Central Bank Gov. Sahap Kavcioglu met expectations set by most economists, who said the bank had little room to maneuver amid inflationary trends. Yet contrary to forecasts by many market analysts, Kavcioglu predicts inflation will peak in April and will soon begin to ease, falling to 12.2% by the end of the year.

The stance, outlined in the bank’s quarterly inflation report, is seen as optimistic by market observers that highlight ongoing pressure on the Turkish economy and an apparent lack of Central Bank independence under Turkish President Recep Tayyip Erdogan, who has repeatedly criticized high interest rates.

“The policy is one of praying inflation falls rather than doing very much about it,” Timothy Ash, an analyst at BlueBay Asset Management, told Al-Monitor.

Ash continued, “Interesting that people are focusing on the statement that policy will remain tight until a big drop in inflation … implying later in the year. But how can anyone trust forward guidance from [the Central Bank] when we know policy is set in the presidential palace?”

Kavcioglu shares Erdogan’s distaste for high interest rates and was expected to cut them following his shock appointment in March, when he became Turkey’s fourth Central Bank governor in three years. Yet since then, the Turkish lira has weakened about 13% against the US dollar, and with Turkey’s import dependent economy, Kavcioglu has been left with little room to cut rates, as many expected.

“If he hikes the rates, he will be sacked, and if he cuts the rates, the lira will go down. That is not how you do policymaking,” Wolfango Piccoli, co-president and political risk analyst at Teneo Intelligence, told Al-Monitor, adding the Central Bank is bound by “political chains, they don’t have credibility in the markets and they are basically trying to stay above water.”

Piccoli added that recent statements by policymakers have been absent of clear decision-making guidelines, raising uncertainty among investors and creating a volatile economic climate were few can predict what will come next.

“If the job of the Central Bank is to manage expectations, they are failing spectacularly,” Piccoli told Al-Monitor. “The only thing we know is until the Monetary Policy Committee meeting, we are at 19%, but nobody knows what’s going to happen after that.”

The next Central Bank rate meeting is scheduled for June 17. In the meantime, Turkey remains under a strict nationwide coronavirus lockdown until May 17, as health officials seek to curb a surge in new cases ahead of Turkey’s peak tourism season.

With the tourism industry accounting for about 12% of the nation’s pre-pandemic economy, state officials are counting on current restrictions to allow for reduced travel restrictions in the coming months along with much-needed cash inflows.