Turkey’s lira and main stock index slid about 9% Monday as markets reacted to the surprise removal of the nation’s central bank chief amid broader political turmoil. 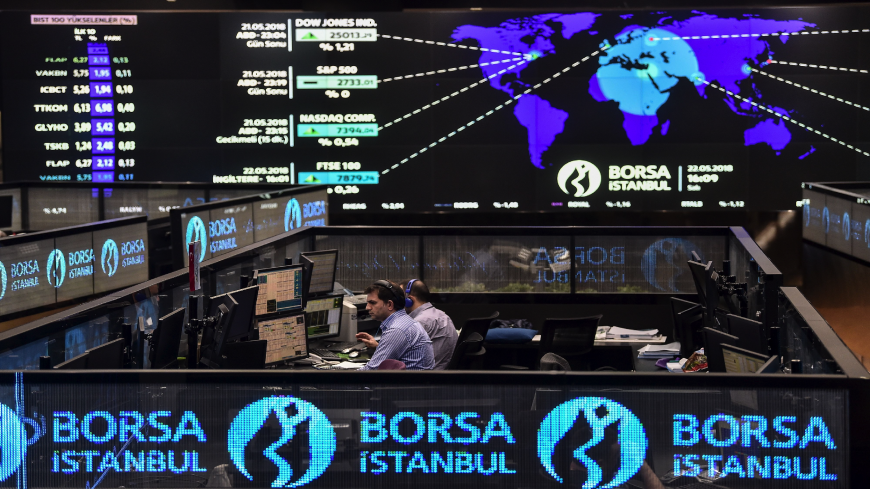 ISTANBUL — Turkish markets plummeted Monday after the surprise weekend dismissal of a central bank chief sparked concerns that a recent set of hawkish monetary policies favored by investors would be reversed.

Turkey’s lira temporarily fell about 15% against the US dollar in early trading Monday before recovering to 10%, trading near 8 liras per greenback through most of the day. The Borsa Istanbul’s main stock index also saw its steepest drop since 2013, losing more than 9% and triggering several trading halts amid financial turmoil.

The market jolts came in response to Turkish President Recep Tayyip Erdogan’s shocking decision to sack central bank governor Naci Agbal by decree early Saturday. No reason was immediately given for the dismissal, but in his four-month tenure, Agbal pursued tight monetary policy measures with aims to stem the nation’s double-digit inflation, the most recent of which raised the nation’s key interest rate by 200 basis points to 19% Thursday.

Agbal was replaced by Sahap Kavcioglu, who became the nation’s fourth central bank chief in two years. A former banking professor at Istanbul’s Marmara University, Kavcioglu was a columnist at the pro-government Yeni Safak newspaper, where he argued for lower interest rates, writing in a column last month that “interest rate increases will indirectly lead to an increase in inflation.”

The view runs counter to mainstream economic theory, which poses the opposite to be true. But the sentiment is shared by Erdogan, who has called interest rates “evil” in the past.

“Agbal’s policies were working. There was light at the end of the tunnel. It was painful but necessary,” Ash told Al-Monitor, adding, “We don’t know anything about the new governor. He doesn’t seem to have any public policy experience.”

Nurettin Canikli, a deputy head of Erdogan’s Justice and Development Party (AKP), defended the move Monday, saying “the government changing a central bank governor who it thought did not use monetary policy instruments rationally … and thus brought a big financial burden to the economy, is not defiance of the markets.”

Economic analysts Monday raised concerns over whether Kavcioglu would reverse recent interest rate hikes or impose capital controls, such as limits on local purchases of hard currencies. But in a statement Sunday, Kavcioglu signaled no emergency interest rate decisions would be taken ahead of the bank’s next rate meeting scheduled for April 15.

Turkish Finance Minister Lutfi Elvan also worked to calm fears Monday, issuing a statement saying, "There will be absolutely no move away from the free market mechanism.”

Wolfango Piccoli, co-president and political risk analyst at Teneo Intelligence, said the statement sent the right message to investors, but that “Elvan should not be the one talking about capital controls and inflation.”

“That is the job of the central bank,” Piccoli told Al-Monitor. “It just shows you the confusion across Turkish institutions.”

He added, “We are in a situation where appointments are made on the go by one person and … institutions in Turkey are now empty shells with no independence, no authority.”

In a note Monday, Piccoli said Agbal’s dismissal was Erdogan’s “biggest mistake” since his decision to hold a rerun of Istanbul’s mayoral elections in 2019, which delivered a “stinging defeat” for the president and the AKP.

Some analysts also warned the central bank under Kavcioglu could revert to selling foreign exchange reserves to prop up the lira, a policy used by Agbal’s predecessors that saw state banks sell an estimated $130 billion over two years, leaving reserves depleted and the Turkish economy further exposed to risk.

Cem Cakmakli, an assistant professor of economics at Koc University, said a repeat of past monetary policies was unlikely as the central bank currently faces a number of constraints, including low reserves and external conditions that have limited the availability of funds for emerging markets.

Cakmakli said Kavcioglu’s appointment signals a policy shift away from the long-term stabilization measures pursued by Agbal and toward short-term objectives like stimulating rapid growth and economic activity. He noted the main challenge for monetary policymakers is now to manage investor expectations.

“If the new governor can convince investors he will work to balance financial stability while pushing toward [more] economic activity, then the turmoil will be mild,” Cakmakli told Al-Monitor. “But if we observe a rapid decline in the interest rate … then of course, expectations will further deteriorate.”

The economic turbulence comes amid broader domestic political tensions stemming from an ongoing crackdown on Turkey’s pro-Kurdish Peoples’ Democratic Party, which saw one of its deputies stripped of his MP status last week and briefly detained Sunday.

Turmoil also came from another surprise announcement that Turkey would pull out of the Istanbul Convention, an international accord to protect women from violence, following a presidential decree issued early Saturday. The move sparked nationwide protests over the weekend and drew condemnation from European and US officials.