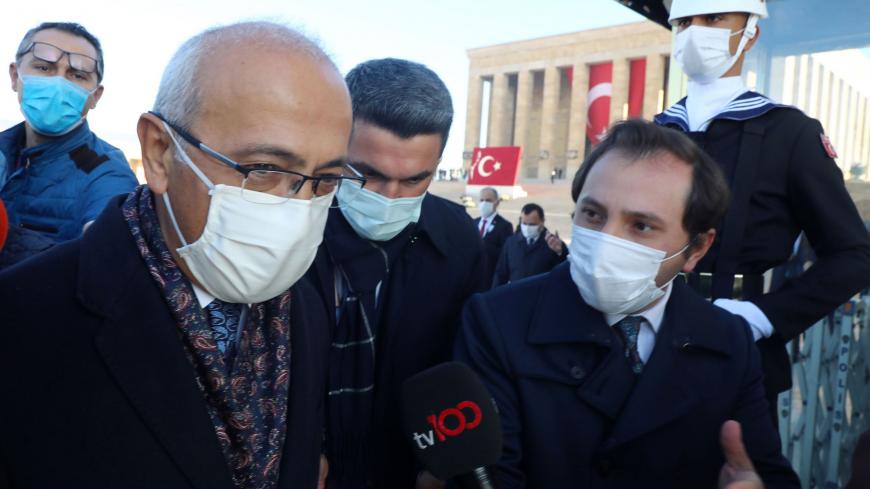 While assuming the position at Turkey’s parliament in Ankara Tuesday, Elvan said he would implement market-friendly changes and work to improve the nation’s investment environment following months of market turmoil that saw Turkey’s currency slide to record lows last week.

"We will decisively support the fight against inflation,” Elvan said in his first remarks as finance minister Tuesday. “We will increase the quality of public finance by maintaining fiscal discipline."

The news follows the dismissal of Turkey’s Central Bank Governor Murat Uysal early Saturday. He was criticized for holding interest rates steady in October and failing to stem double-digit inflation in the country. Uysal was replaced by former Finance Minister Naci Agbal, who had reportedly been at odds with Albayrak over his management of Turkey’s economy.

The shakeup saw Turkey’s lira make its largest gains in two years, rising 6% against the dollar Monday, in an apparent sign that international investors were expecting a policy shift from the new economy team. Following Elvan’s appointment, the lira slid back about 4% Tuesday and was trading at about 8.15 per greenback at 7 p.m. Istanbul time.

Now Turkey observers are waiting to see if policy-makers will change course in a Central Bank interest rate meeting scheduled for Nov. 19.

“People will generally be happy that Albayrak’s gone,” Timothy Ash, an analyst at BlueBay Asset Management, told Al-Monitor. “Among the people that could have been chosen, Lutfi and Agbal are the best of the group. … They are capable technocrats.”

He added, “The question is whether they can withstand pressure from Erdogan, which will inevitably come.”

Addressing recent events Tuesday, Erdogan reiterated his administration was dedicated to “free-market economy rules” and “growth led by the private sector.” In recent years, investors have criticized Erdogan for holding an unorthodox monetary stance. He believes raising interest rates causes inflation instead of stemming it.

“We are putting up a historic fight against those who want to condemn Turkey to modern capitulations through the shackles of interest rates, inflation and exchange rates,” Erdogan said Tuesday.

Erdogan’s aversion to interest rate hikes as Turkish markets slid under the pressure of the COVID-19 pandemic saw Central Bank policy-makers impose a slew of backdoor monetary tightening measures that increased real borrowing costs. Over the last two years, Albayrak is also believed to have encouraged the Central Bank to spend up to $140 billion in reserves to support the currency.

With those reserves running low and domestic patience running thin amid a worsening economic picture in the country, Turkish leaders apparently opted to intervene.

“The removal of Albayrak and Uysal was driven by the loss of reserves,” Ash told Al-Monitor. “In the end, they pursued this exchange rate policy that failed. They wasted between $130 and $140 billion in defending the currency … for no reason.”

The impact of the shakeup remains to be seen as Goldman Sachs analysts forecasted a policy rate hike to 17% by 2021, up from 10.25 currently, in a note to investors Tuesday.

“Most importantly, we think that whether there will be enough political support to bring about the required tightening will be the main issue,” they wrote.

With heightened expectations, investors will monitor Elvan and Agbal’s efforts to reverse the course of Turkey’s $740 billion economy, the 20th largest in the world, after twin economic shocks in 2018 and 2020 have seen the Turkish lira lose about 45% of its value over the last two years.

Elvan was Turkey’s deputy prime minister between 2015 and 2016 and served as chair of the parliamentary Planning and Budget Committee. He holds an engineering degree in mining from England’s University of Leeds and a degree in economics from the University of Delaware in the United States.

“It’s likely to be an unappreciated job and it’s a borderline mission-impossible job,” the analyst told Al-Monitor, requesting to remain anonymous.

The source continued, “Meeting the expectations that have been raised over the last 48 hours, I think, will be a tough job for anyone, especially in an environment where it’s a question mark whether Erdogan will let you do [the job].”