Turkey’s inflation rate rose to 15.61% in February, marking the fifth month of consecutive increases and raising expectations for the central bank to introduce further rate hikes. 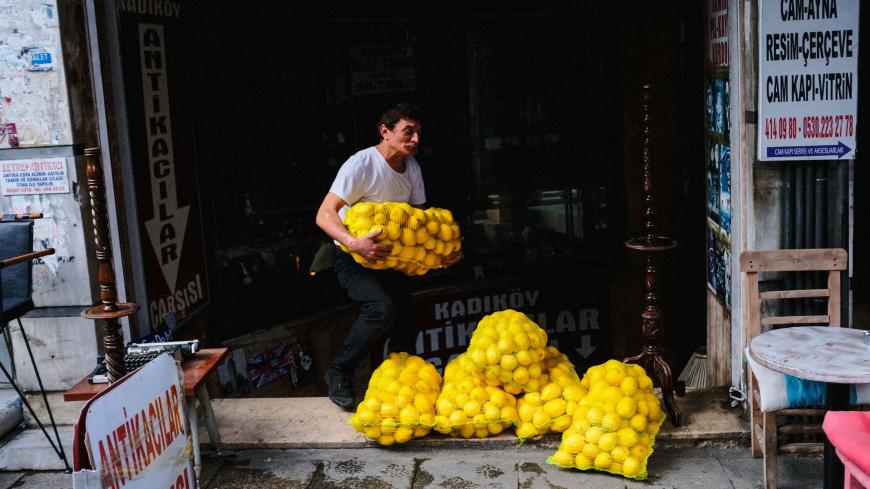 A man carries lemons as he gets prepared for his day at Kadikoy, in Istanbul, on March 2, 2021, after the country eased restrictive measures against the COVID-19 pandemic in regions with lower infection rates. Meanwhile, the country's new central bank governor also has been doing some heavy lifting to try to strengthen the Turkish lira and curtail inflation. - (Photo by BULENT KILIC / AFP) (Photo by BULENT KILIC/AFP via Getty Images

ISTANBUL — Turkey’s annual inflation rate rose for the fifth month in a row, growing to 15.61% in February up from 14.97% in January, according to official data published by the Turkish Statistical Institute on March 3.

The consumer price index increased above forecasts by Bloomberg and Reuters, which put median inflation estimates at about 15.4% prior to the announcement. The March 3 data also showed Turkey’s monthly inflation stood at 0.91%, driven primarily by rising prices in energy, household goods and food products as well as the continued economic impacts of the COVID-19 pandemic.

“The uptick in February inflation seems to reflect that demand conditions remained strong enough in early 2021 for producers to be able to pass their rising costs such as higher energy prices onto consumer prices,” Ugras Ulku, head of European emerging markets research at the Institute of International Finance, told Al-Monitor.

“They’ve had a wait-and-see approach in the last two monetary policy committee meetings," Timothy Ash, an analyst at BlueBay Asset Management, said in reference to recent decisions that have kept rates steady at 17%. “I just cannot see them not hiking in the next meeting.”

In recent months, Agbal has repeatedly pledged to keep monetary policy tight in effort to reel in the nation’s double-digit inflation and work toward the state’s inflation target of 5%. He has overseen a number of reforms that simplified borrowing and returned central bank policies to mainstream approaches that have brought praise from international investors.

Prior to Agbal’s appointment, Turkey’s economy management team under Finance Minister Berat Albayrak, son-in-law of Turkish President Recep Tayyip Erdogan, pursued policies that saw state banks sell off an estimated $130 billion in foreign exchange reserves to bolster the lira. The policies were widely perceived as unorthodox and shook confidence in Turkish markets as the nation’s currency lost more than 20% of its value against the US dollar in 2020. Albayrak was replaced by Lutfi Elvan in November.

Agbal and Elvan have sought to reverse the course of Turkey’s economy in the face of a global downturn amid the COVID-19 pandemic. Ash said the pair’s more orthodox approach has been a “massive improvement.”

He added, “In the end it’s about de-dollarization. Inflation has to fall for people to stop dollarizing” their savings, which will be the key to stabilizing the Turkish economy, Ash said.

The March 3 inflation data sparked an initial rise in the Turkish lira on expectations of a rate hike later this month before the currency slid to 7.42 against the US dollar.

In the past, central bank policymakers said they would increase rates if needed to stem inflation and Ulku said such a move was more likely following this week’s figures.

“The central bank’s recent communications have provided a rather hawkish forward guidance to markets, with the bank having stressed very forcefully that it will not hesitate to tighten monetary conditions further if upside risks to [its] inflation projection materialize,” Ulku said.

The news comes after the Turkish economy grew 5.9% in the fourth quarter of 2020, outpacing all emerging markets except China. The International Monetary Fund forecasts the nation’s economy to expand by 6% in 2021, but much depends on a speedy COVID-19 vaccine rollout. Meanwhile, unemployment remains high at about 13%, according to official figures, though some economists estimate Turkey’s real unemployment rate is closer to 30%.

“Maintaining a tight — or even tighter — policy stance to bring down inflation and inflation expectations will improve prospects for the lira and Turkey’s risk outlook in the period ahead,” Ulku said.