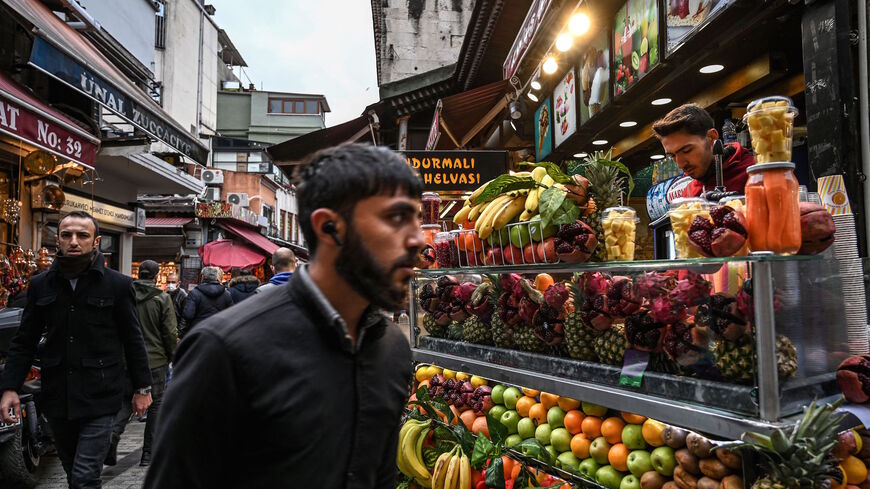 A man walks past a fruit seller at Eminonu district near Spice Bazaar in Istanbul, on Nov. 24, 2021. - OZAN KOSE/AFP via Getty Images

While speaking to reporters on a flight back from Turkmenistan, Erdogan reiterated his unorthodox claim that lower interest rates would eventually curb inflation, a stance contrary to mainstream economic theory.

“I have always argued for lower interest rates and repeatedly said rates should be lower,” Erdogan told Turkish broadcaster NTV. “I have never advocated and will not advocate interest rate increases.”

The lira slid more than 4% in value against the US dollar after the statements and was trading at 12.85 per greenback at 7 p.m. Istanbul time Monday.

With official annual inflation at nearly 20% in October, and expected to rise to 20.7% in November, according to a Reuters survey, some analysts believe Turkey’s current monetary policies could present further risks for the economy, such as higher inflation and more currency devaluation.

Erdogan last week portrayed currency volatility as part of an “economic liberation war” that would eventually see Turkey become more competitive as an export hub, drawing new investments and production plants through lower labor costs, which are partly driven by the weaker lira.

"We will solve the problems caused by price increases with no economic basis on the exchange rate through investment, employment and production in favor of our nation,” Erdogan said Monday.

News reports over the weekend also indicated Turkey’s State Supervisory Council will launch a probe into whether criminal activity or attempted currency manipulation were behind exchange rate fluctuations in November.

The lira has fallen as much as 45% in value against the US dollar since the start of the year, with losses concentrated in the last three months after Central Bank monetary policymakers issued three consecutive key interest cuts. Since September, Turkey’s main policy rate was reduced by 400 basis points to 15%, well below the annual inflation rate of 19.89%.

“What we see is a determined effort to try to convince the public that they are on top of things, and this is part of a new economic model plan,” Piccoli told Al-Monitor regarding Erdogan’s statements Monday.

Piccoli said Turkish policymakers appear to be replicating an economic experiment they have used in the past, but this time external conditions are less likely to produce similar results. Emerging market currencies have been generally struggling against the US dollar this year, and expectations the US Federal Reserve will soon pull back on coronavirus pandemic support programs will likely draw investors away from emerging markets like Turkey.

“There isn’t a plan, that is the reality,” Piccoli said. “[Erdogan] is selling something that is not new and something that has not been prepared properly while blaming everybody else for what is going wrong.”

Erdogan has repeatedly pointed to foreign actors as part of the cause for Turkey’s economic troubles, often referring to a malicious “interest rate lobby” in his speeches. At the same time, the Turkish leader has positioned the current lira depreciation as an opportunity to increase exports for Turkish producers.

Yet observers have noted many Turkish manufacturers depend on imported materials, which companies must purchase at foreign currency values, and therefore absorb price increases through the production cycle despite the lower labor costs enabled by a cheaper lira.

Erdogan has also argued Turkey could serve as a supply chain hub where companies could open factories and take advantage of the nation’s relative proximity to Europe. Such a shift would require long-term planning and sustained education programs to support a high-skill work force, said Cem Cakmakli, assistant professor of economics at Koc University.

“If the production base can shift itself toward a more domestically oriented production … if they can produce [currently imported products] domestically, then the chance that financial conditions will get better is higher. But this takes — at least from the examples we know — a long time,” Cakmakli told Al-Monitor.

Cakmakli said that a more sustainable business environment would be needed to draw investor interest, primarily with an immediate focus on price stability.

The Turkish Statistical Institute is expected to publish November inflation data Dec. 3. On Dec. 16, the Central Bank Monetary Policy Committee will hold its last rate setting meeting of the year, and policymakers hinted further cuts might be applied.

“The big question is what happens with domestic savings?” Piccoli asked, regarding Turkey’s economic outlook. “Will [Turkish bank account holders] remain cool-headed as they seem to be or will sudden panic kick in and we will see them rushing to the banks to take money out?”