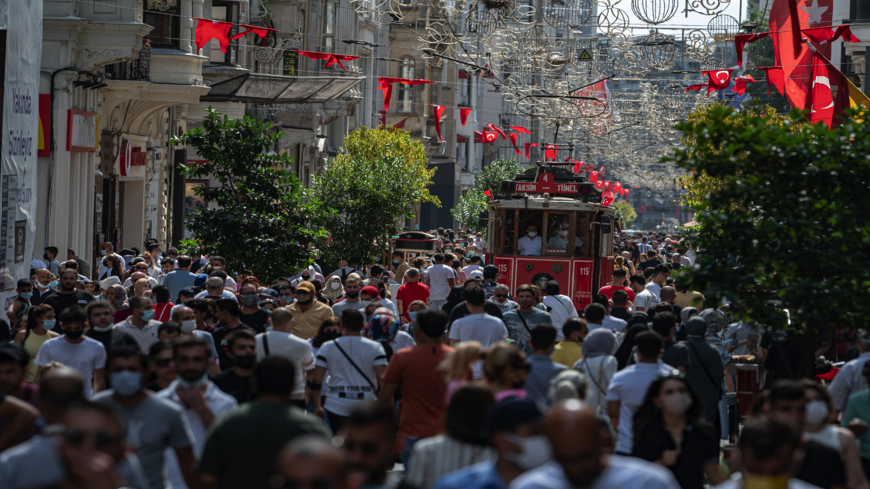 Pedestrians walk on Istiklal Street, the main shopping street in Istanbul, on the fourth day of the Eid-al-Adha holiday on July 23, 2021. - YASIN AKGUL/AFP via Getty Images

The Turkish economy grew 21.7% in the second quarter from the same period last year, the Turkish Statistical Institute announced Wednesday, in what was hailed as the highest growth rate in Turkey’s recent history. Despite the mammoth rate, the country’s economic prospects remain fragile amid ongoing currency risks over President Recep Tayyip Erdogan’s push for lower interest rates despite unyielding inflation.

The nearly 22% increase in gross domestic product (GDP) owes much to a strong base effect from the second quarter of last year, when the country’s GDP shrank 10.3% under the impact of the COVID-19 pandemic as households cut back on consumption, many businesses were fully or partially closed, and lockdowns paralyzed the services sector. Thus, the figure was not exactly a surprise. Many other countries have posted two-digit growth rates, though not as high as 22%.

No doubt, the massive growth rate owes also to economic revival after the easing of pandemic restrictions. A boom in private consumption — the result of deferred spending during the pandemic — was a major driver, in addition to new investments to replenish stocks exhausted during the pandemic and a similar revival in exports and tourism.

Turkish consumers — particularly those in the top 20% income group — had a further incentive to spend as inflation continued to rise but interest rates remained unchanged, leading many to rush to buy cars and other durable goods before prices increased further. Those with ample savings put money also in investment homes and other real estate.

Meanwhile, pent-up demand in foreign markets helped the revival of certain Turkish exports and thus industrial production. The country’s tourism sector, which had ground to a halt in spring 2020, perked up as well, contributing to the uptick in private consumption as well as to foreign trade.

In sum, the increase in domestic and foreign demand revved up the wheels of the industry. In a harbinger of an extraordinary growth rate, industrial output data showed last month that industrial production, which contributes 22% of Turkey’s GDP, increased 40% in the second quarter from the same period last year.

New investments were also instrumental in boosting GDP growth. Companies used up their raw-material stocks and installed capacities to meet the pent-up demand and immediately moved to renew them. Commenting on the Istanbul Industry Chamber’s manufacturing index, which hit a six-month high in July, Andrew Harker, economics director at IHS Markit, said, “Firms showed themselves able to rebound quickly last year and appear to be on track to do so again, with sharper increases in employment and purchasing activity helping them to deal with rising workloads.” He warned, however, that the resurge in COVID-19 infections in Turkey might fuel “concerns that growth plans could be hindered again in the months ahead.”

Despite the massive growth rate, Turkey’s GDP is not as impressive in terms of dollars, given the dramatic slump of the Turkish lira in recent years. Year-on-year GDP was worth $765 billion, meaning a GDP per capita of about $9,000, a far cry from $12,500 in 2013.

Furthermore, a comparison between successive periods shows that the GDP increased only 1% in the second quarter from the first quarter of the year, in which the growth rate was 7.2%. For the Economic and Social Research Center at Istanbul’s Bahcesehir University, a respected think tank studying economic trends, such signs of economic stagnation or even sagging are the actual aspect that needs to be highlighted.

An imminent question now is whether Erdogan will push the central bank to cut interest rates in a bid to sustain growth in the third and fourth quarters. The next meeting of the bank’s monetary policy committee is scheduled for Sept. 23. The August inflation data, due to be released Sept. 3, will be closely watched in this context.

Despite Erdogan’s assertions to the contrary, inflation is unlikely to abate. Still, Erdogan’s main strategy is to focus on growth instead of inflation, which he has failed to rein in. Speculation is rife he might be planning to bring elections forward from 2023, probably next year, hoping to ride the wave of growth and smokescreen his failure to deliver on inflation. Could economic growth outweigh the crushing impact of inflation for voters? That’s what Erdogan is desperately betting on amid his sagging poll numbers.

Keen on impressing voters, Erdogan’s Justice and Development Party may hype up the year-on-year growth rate and ignore the slowdown vis-a-vis the first quarter, but the volatile nature of growth is certainly a cause of concern for the president; hence the expectation he would push the central bank to lower interest rates in a bid to stimulate consumption even as inflation remains high.

Annual consumer inflation reached nearly 19% in July, while producer inflation climbed to nearly 45%. The trend is unlikely to have eased in August. The central bank’s policy rate stands at 19% as well, and Erdogan would be taking a major risk by cutting the rate in such an inflationist environment. Such a move, monetary pundits warn, could trigger a fresh dollarization wave and send the Turkish lira into another tailspin, which Ankara would struggle to contain despite a relative increase in the inflow of foreign capital and the arrival of $6.3 billion in reserves support from the International Monetary Fund.

Turkey’s currency woes have already led to a massive flight from the lira. As of Aug. 23, foreign exchange deposits held by locals totaled $256 billion, including $163 billion held by real persons, representing 56% of all deposits in Turkish banks, central bank data show. Experts warn the figure could easily exceed 60% amid a fresh rush for dollars triggered by a rate cut by the central bank.

Whether Erdogan could manage to convince voters remains to be seen, but tellingly the nearly 22% growth rate has failed to contribute to a fairer distribution of income. Wednesday’s data show that the share of payments to wage earners dropped to some 33% of GDP from 37% in the same period last year.