Ankara’s departure from a much-criticized policy to keep interest rates low offers hope for a currency recovery but threatens economic recession and fresh livelihood grievances for the populace. 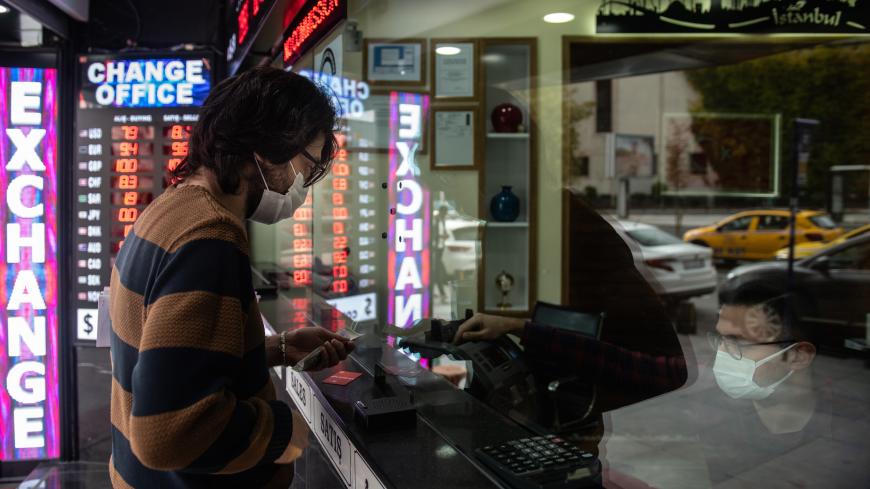 The rate hike offers hope that the sharp depreciation of the Turkish lira and the dollarization trend in Turkey could abate but also threatens economic contraction and fresh livelihood grievances for the populace, similar to the downturn in 2018, for which Erdogan’s Justice and Development Party (AKP) paid dearly in local elections in spring 2019.

The Central Bank’s monetary policy board, chaired by new Governor Naci Agbal, increased the one-week repo rate by 475 basis points to 15%, heeding market expectations since Agbal’s abrupt appointment to the helm of the bank Nov. 6. In a bigger surprise, Erdogan’s son-in-law Berat Albayrak quit as treasury and finance minister two days later and Erdogan followed up with pledges of reform.

As an initial impact, the rate hike spurred a 2% jump in the lira in afternoon trading and Turkey’s risk premium — reflected in credit default swaps — dropped below 400 basis points. How much the rate hike will encourage Turks to keep their savings in liras and attract foreign investors remains to be seen as Turkey’s consumer inflation stands at about 12% and threatens to rise further.

The most crucial risk is that the Turkish economy might end up stuck between high hard currency prices and high interest rates, which, coupled with the grave impact of the COVID-19 pandemic, might result in a fresh period of recession and further swell the army of jobless. Unemployment in Turkey stands at 13.2% officially, while alternative calculation methods, deemed to be more realistic, put the rate at about 30%. Numerically, the rates mean 4.2 million and 10 million jobless people, respectively.

The government is already speaking of “bitter pills.” As an apparent sweetener, Erdogan is pledging also judicial reforms and a “human rights action plan.” One intention behind those pledges is to appeal to the West and foreign investors, whose confidence in Turkey has waned not only because of Ankara’s economic management but also the erosion of the rule of law in the country. Many are skeptical over the prospect of meaningful reform, given Erdogan’s record and his alliance with the far-right Nationalist Movement Party, which favors even further authoritarianism. The party’s support has been critical in keeping Erdogan in power, but the reform project might spark political tensions in Ankara.

At the core of Turkey’s economic woes lies the government’s insistence on ill-advised policies since the country’s transition to an executive presidency system — a “one-man regime,” as many view it — in 2018. Erdogan has long argued that high interest rates cause inflation, an unconventional theory that he sought to impose on the Central Bank until he signaled a fresh economic course this month.

In earlier years, Turkey enjoyed abundant inflows of foreign capital, but that unprecedented opportunity was wasted as Ankara chose to encourage the construction sector and domestic consumption rather than sectors capable of bringing in hard currency. The government erred big time in assuming that such lavish policies, which earned it political gains, were sustainable. The tide began to turn in 2013 and the inflow of foreign capital eventually dried up, leaving Turkey with a bulky external debt and a hard currency crunch.

Controversial foreign policy moves have also contributed to Turkey’s waning credibility among foreign investors, especially in the past three years, as the government sought to whip up nationalist sentiments to stop the erosion of its popular support in the face of economic woes.

From 2016 to 2020, the lira slumped from about three to more than seven against the dollar, meaning a 135% increase in the price of the greenback, which slowed the import-reliant economy. Economic growth has averaged 1.5% in the past three years — merely a fourth of the up to 6% growth potential the country is widely considered to have.

In the latest bout of currency turmoil in early November, the price of the dollar hit 8.5 liras, a 48% increase over a year. The government is now scrambling to prop up the lira through rate hikes and keep the price of the dollar in the region of 7.5 liras at the expense of a potentially lengthy period of economic stagnation and contraction.

Turkey’s currency crisis began in the summer of 2018, shortly after Erdogan assumed sweeping powers as executive president. A political crisis with Washington over Turkey’s detention of an American priest sent the lira into a tailspin. The price of the dollar soared by nearly 40% in about two months, leading the Central Bank to raise its benchmark rate by 625 basis points in September that year. The average cost of Central Bank funding rose to 24%, up from 17.8% in June 2018, leading to economic stagnation and contraction. Gross domestic product shrank 2.7% in the last quarter of 2018, followed by negative growth in the first two quarters of 2019.

The economy began to grow in the second quarter of 2019 as the government appointed a new Central Bank governor who heeded Erdogan’s calls for lower rates and used Central Bank reserves to funnel hard currency to the market via public banks to shore up the lira. Still, the overall growth in 2019 was less than 1%.

The policy of low interest rates and suppressed hard currency prices ensured an economic growth of 4.4% in the first quarter of 2020, but under the impact of the COVID-19 pandemic, GDP contracted nearly 10% in the second quarter. Thanks to rate cuts and a short-lived loan bonanza that followed the reopening of the economy in June, the GDP is estimated to have grown about 7% in the third quarter. The official figure will be released later this month.

The expected downturn is likely to continue through the first half of 2021, akin to the turmoil in 2018, as domestic demand shrinks under the impact of increased interest rates. Worse, it might extend to the second half of 2021 amid renewed restrictions and lockdowns, forced by the resurging pandemic. In sum, Turkey appears headed for a sharp economic contraction next year, which would mean more joblessness and impoverishment for its people.