Mountain of debt growing under the rug in Turkey

Turkey’s loan expansion has helped resuscitate the economy, but at the expense of an alarming surge in consumer and corporate debt. 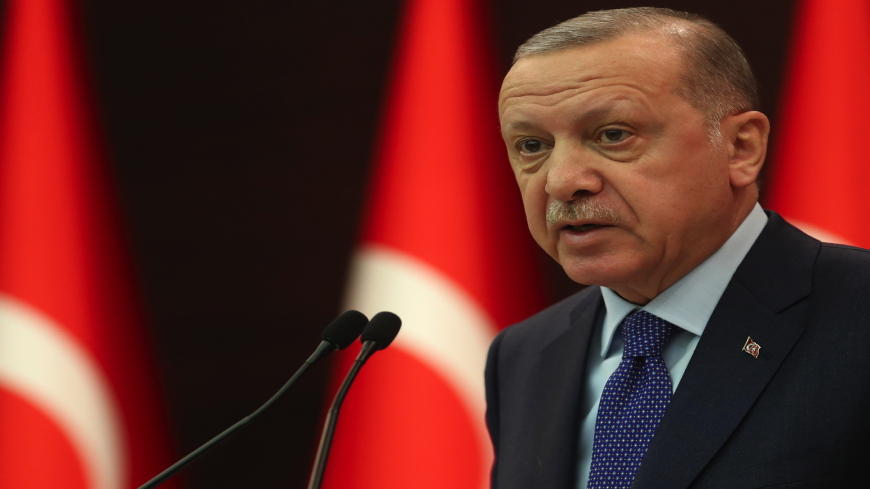 Turkish President Recep Tayyip Erdogan speaks during a press conference held after the coordination meeting to fight against the novel coronavirus, COVID-19, at the Cankaya Palace in Ankara on March 18, 2020. Erdogan announced on March 18, 2020, a $15 billion package to help the Turkish economy cope with the crisis over the new coronavirus, and urged Turks to leave their homes as little as possible. - ADEM ALTAN/AFP via Getty Images

The Turkish government’s monetary expansion policies, used as a quick fix to prevent major economic contractions, have resulted in an extraordinary consumer and corporate debt that poses further dilemmas for Ankara down the road.

Over the past year, the loan volume grew 40% as Ankara facilitated access to credit in a bid to contain the economic downturn caused by the coronavirus pandemic, which hit atop economic turmoil since 2018. The loan bonanza did stimulate the economy, but how lasting that impact will be remains open to question — not to mention its serious side effects that have already forced Ankara to change course.

Governments across the world have used expansionary monetary policies to cushion the economic fallout of the pandemic. Such measures have usually come in tandem with expansionary fiscal policies, including direct cash transfers. In Turkey, the government’s primary response was to facilitate access to credit. The minimal direct assistance has totaled less than 1% of the country’s gross domestic product (GDP), including some 8 billion Turkish liras ($1.1 billion) in so-called “social shield” aid from the central government budget and about 36 billion liras ($4.7 billion) in payments from the Unemployment Insurance Fund.

The government hoped that cheap and abundant credit would relieve cash-strapped consumers, allow companies to keep afloat and roll over debt, and thus contain economic contraction.

Loan expansion had already been underway since 2019 when the ruling Justice and Development Party (AKP) suffered big losses in local elections amid voter frustration with growing economic woes since the currency turmoil in mid-2018. The slump of the lira, which came shortly after Turkey transitioned to an executive presidency system, had forced interest rate hikes that curbed the loan demand. Ignoring the accompanying risks, the government pushed for the lowering of rates to expand the loan volume. This resulted in a relative economic recovery in the last quarter of 2019 and the first two months of 2020.

In March, however, the COVID-19 pandemic reached Turkey, causing the economy to shrink by nearly 10% in the second quarter. The unemployment rate surged to 40%, according to alternative calculation methods deemed more realistic than the official one, which has turned up decreases in the jobless rate during the pandemic. The government moved to reopen the economy in June and pushed for fresh rate cuts to facilitate further credit access. A boom in home and car sales was the most visible outcome of the ensuing borrowing frenzy.

As a result, Turkey’s loan volume stands at nearly 3.7 trillion liras ($487 billion) today, a 40% increase from 2.6 trillion liras at the end of 2019, according to official figures. Consumer prices have risen 12% in the same period, meaning that the surge remains enormous in real terms as well.

The increase of more than 1 trillion liras is equivalent to 21% of the country’s GDP in terms of current prices over the past year. In other words, a sum amounting to more than a fifth of the GDP has flown into the economy. This abnormal credit injection is the key reason why the Turkish economy evaded a contraction of more than 10% in the second quarter before growing 6.7% in the third one and may well avoid a full-year contraction despite the pandemic.

Statistics show that consumer loans have seen the biggest quantitative increase, expanding by 46% or some 260 billion liras ($34 billion) over 12 months. People used loans copiously to buy homes and cars, but also to meet their livelihood needs. The increase in consumer demand was instrumental in the 6.7% economic growth in the third quarter.

Sub-branches of the manufacturing industry have abundantly used loans as well. As of October, their loan stock was up by 254 billion liras ($33.4 billion) over a year, totaling some 792 billion liras ($104 billion) or nearly 22% of all loans.

The commerce sector was the third most prolific loan user, followed by the construction sector, one of the worst-hit branches of the economy.

On the other side of the coin, however, banks are faced with an increase in delayed payments and an uptick in nonperforming loans.

Overdue loan payments referred to legal follow-up stood at nearly 166 billion liras ($21.8 billion) in October, amounting to 4.5% of all loans, according to figures by the Banks’ Association Risk Center. In some sectors, the percentage of bad loans is much higher than the average, reaching nearly 10% in the construction sector.

The overall ratio of bad loans is lower than the 5.4% in October 2019, but the decline stems from relief measures against the pandemic, including the extension of the overdue period from 90 to 180 days, installment deferrals and debt restructuring schemes, which effectively defer the classification of nonperforming loans as such. Whether those facilities will continue next year is unknown, but this boils down to sweeping the dirt under the rug anyway.

After the replacement of the central bank governor and the treasury minister in early November, Ankara put the brakes on its loan encouragement policy amid major side effects, including an increase in inflation, a boom in imports, and thus a growing current account deficit and, ultimately, fresh currency jitters. The central bank went back to raising interest rates last month.

But the economic turmoil is far from over, and Ankara is now left with two options. The first is to use fiscal policies to support companies, low-income households and the jobless — that is, to notably increase direct assistance. Yet the government lacks the funds to do so, and its budget deficits are growing. The other option is to leave companies to fend for themselves. Big fish swallowing small fish or voluntary mergers are usually the scenarios that unfold in such circumstances.

In short, Turkey’s real sector is headed for a rough patch. The government’s ability to act as a guide, especially to companies, could limit the damage as economic actors navigate the storm. Its failure to do so could result in extensive havoc.