Turkey’s public debt has swelled more than 40% over a year, adding to economic risks despite a relative recovery in the second half of 2020. 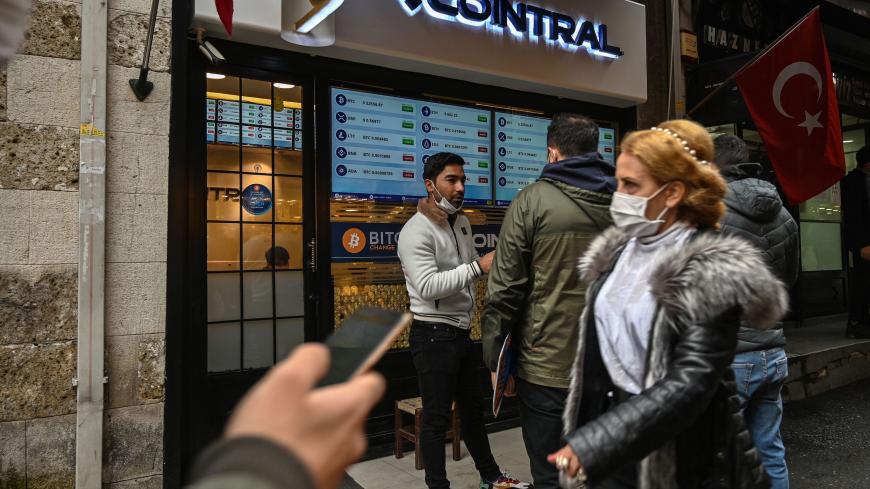 People pass in front of a cryptocurrency "Bitcoin Change" shop near the Grand Bazaar on Dec. 17, 2020, in Istanbul. - OZAN KOSE/AFP via Getty Images

Turkey’s crisis-hit economy ducked a major contraction in 2020 thanks to a lavish loan stimulus that spurred a relative recovery in the second half of the year. The reversal, however, did not come without a price. Official figures show an alarming increase in the public debt burden despite the celebratory air in Ankara.

The COVID-19 pandemic undermined the economies and public finances of countries around the world last year, but Turkey’s economy was already fragile and its public deficits were already on the rise when the coronavirus arrived.

The Turkish economy contracted nearly 10% in the second quarter as lockdowns paralyzed business activity, hitting the government's tax revenues hard. The reopening — backed with temporary levers such as cheap and abundant credit and moves to suppress foreign-exchange prices — resulted in economic growth of nearly 7% in the third quarter. The recovery continued in the fourth quarter under the accumulated impact of the loan stimulus. Turkey was thus able to avoid a more disastrous contraction and slow the expansion of its budget deficit, but not without a heftier debt burden and contraction risks down the road.

The public finance troubles have grown numerically as well as in terms of risk, with the central government, local administrations, social security agencies and public enterprises all faced with increasing deficits. And because of growing borrowing needs, the public debt stock is swelling anew, coupled with a sharp increase in interest rates.

In a series of tweets Jan. 18, Treasury and Finance Minister Lutfi Elvan, who replaced the president’s son-in-law Berat Albayrak in November, boasted that the government posted a budget deficit of 172.7 billion Turkish liras ($23.2 billion) in 2020, outperforming the target of 239.2 billion liras ($32.2 billion). “We saved around 66.5 billion liras,” he claimed.

Erdogan was similarly jubilant. “If we succeed in realizing the growth rate envisaged in this year’s program, the budget deficit will decline to 3.6% of gross domestic product. Our year-end budget deficit was less than 173 billion liras, well below the program’s target of 239 billion liras,” he said Jan. 15.

Both officials, however, avoided mention of the fact that Ankara’s budget deficit target stood at 139 billion liras ($18.7 billion) in the beginning of 2020 before being revised later in the year. Based on the original program, the year-end deficit overshot the target by nearly 25%. The deficit had already hit 110 billion liras ($14.8 billion) in the first half of the year, prompting the upward revision to 239 billion liras as part of a so-called New Economic Program Albayrak announced in September. Yet the deficit grew less in the second half of the year. What led to the slowdown?

The tailwind for public finances came from the government-encouraged loan expansion, which revived consumption and led to a notable increase in tax revenues in the third and fourth quarters. Easy access to cheap credit sparked a boom in the sales of homes, cars and durable goods. The rejuvenated demand fueled imports. Hence, consumers and importers were the main contributors to the increase in tax revenues.

As for budgetary spending, interest payments on debt and non-interest spending proceeded nearly on par. Ankara’s suppression of interest rates until November was also instrumental in keeping the bill relatively low.

Still, the budget deficit was 38.5% bigger than last year’s gap of some 125 billion liras — an obvious indication of how sharp the increase has been.

Out of the nearly 173-billion-lira deficit, 134 billion stemmed from interest payments on debt, while the remaining 39-billion-lira gap has meant fresh borrowing.

Domestic debt accounts for about 58% of the public debt stock, more than a half of which stems from interest. Last year, interest payments on public debt increased 34% from 2019 to reach about 134 billion liras ($18 billion), representing more than 12% of budgetary spending, up from less than 9% two years ago.

Nearly 58% of the public debt stock is denominated in hard currency, including not only external debt but also 26.2% of domestic debt. Given the volatility of the lira, this means an additional risk atop the steep increase of the debt stock.

The worsening in public finances is, no doubt, part of the general economic downturn that has plagued Turkey since 2018, when it transitioned to an executive presidency system. The economic tumult is hardly detached from the new governance system, which concentrated power in the president’s hands, upending established decision-making mechanisms and eroding checks and balances. Ankara can no longer mask the deterioration of macroeconomic and fiscal indicators, but real recovery could become possible only through balanced and fair steps that would begin on a political level and extend to the macro economy.