Funds allocated to interest payments account for 13% of all spending in Ankara’s draft budget for next year, outstripping education and healthcare spending. 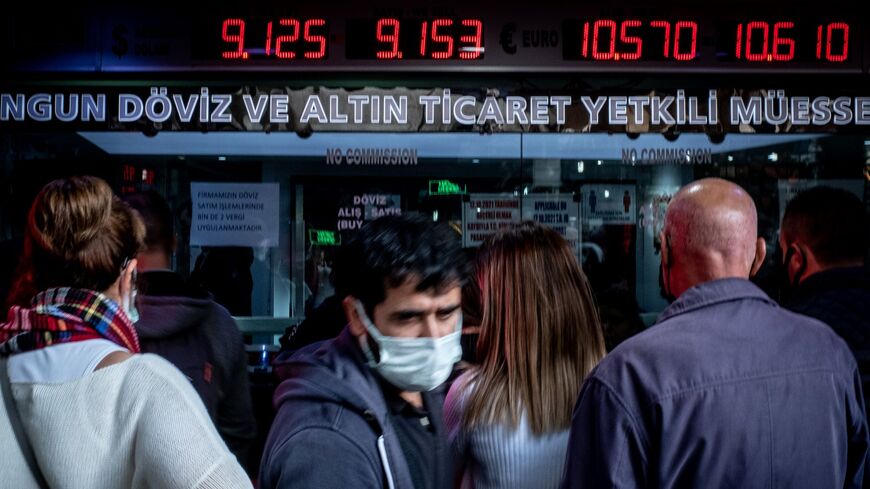 People line up to exchange money at a currency exchange office on Oct. 14, 2021 in Istanbul, Turkey. - Chris McGrath/Getty Images

The COVID-19 pandemic has changed many people's view of government budgets, with the focus shifting from deficits to cushioning the fallout of the pandemic.

Amid rising public needs for healthcare and economic support, many governments have put the emphasis on social well-being, braving larger budget deficits. Yet, others, like the Turkish government, have been tightfisted, keeping deficits in check but forcing millions of citizens into debt.

The Turkish parliament is now debating the government’s draft budget for 2022, which reflects an ongoing stinginess on the part of Ankara, although the pandemic is far from over and many people still need state support. Moreover, funds allocated to interest payments outstrip the planned spending on education and healthcare, while funds allocated to the military and the police remain uncut.

The draft envisages a budget deficit of 3.5% of gross domestic product (GDP) next year. The budget deficit-to-GDP ratio stood at 2.9% in 2019 and 3.9% in 2020, and is projected to be 3.6% this year. This is in sharp contrast to advanced-economy countries, whose ratio averaged 7.4% last year, up from 3.2% in 2019, and is projected at 7% this year amid increased spending on healthcare and welfare support due to the pandemic. The public debt-to-GDP ratio of those countries rose as well, reaching 122% from about 103% before the pandemic. Many of Turkey’s emerging-economy peers increased social spending as well, braving larger budget deficits.

In Turkey, the pandemic hit an already ailing economy, marked by rising unemployment, a tumbling currency and soaring inflation. Yet Erdogan’s government offered its citizens only minimal assistance and refrained from borrowing to expand the budgets for social welfare and healthcare. Its most notable measure was to ease credit lines and encourage citizens to borrow.

The government’s draft budget for 2022 maintains long-standing injustices both in terms of taxation and spending.

On the taxation leg, “forgiven” taxes — or tax exclusions and exemptions that benefit mostly corporates and the wealthy and are technically called “tax expenditures” — amount to a fourth of the projected tax revenues. This is not to mention the money that is being transferred to tax havens as the government looks the other way.

As in previous budgets, indirect taxes — or taxes levied mostly on consumption — account for two thirds of the projected tax revenues. And the bulk of direct taxes would be paid by wage-earners as payroll taxes. Even the minimum wage is subject to taxes amounting to 10% of the net sum, which is currently 2,825 Turkish liras ($293). The income and wealth taxes paid by the well-off and corporate taxes would be again at low levels.

The spending leg is marked by even bigger injustices, as it involves borrowing that would swell the public debt burden and weigh on the nation for years to come.

In line with the program-based budgeting introduced last year, the government has outlined allocations for 69 programs. According to this classification, almost all of the Treasury’s allocations are destined for interest payments, which alone constitute 13% of budget spending. In comparison, the funds allocated for basic, secondary and higher education represent only about 12%.

Interest payments have become the largest item in the 2022 draft budget as a result of increased borrowing in hard currencies, the cost of which has grown significantly due to the dramatic depreciation of the lira. As of September, the treasury’s debt totaled 2.1 trillion liras (about $221 billion) and 58% of it was in hard currencies, up from 39% in 2017.

Meanwhile, the funds allocated to the military and the police represent 10.7% of total spending.

Despite the ongoing pandemic, healthcare spending remains limited. Funds allocated to curative and preventive healthcare total 6.3% of the projected spending, or just half of the share of interest payments.

And even though the pandemic has aggravated poverty in Turkey, the draft budget allocates only 2.8% of spending to combating poverty. The funds to support the handicapped account for 1.4%.

The share of agricultural programs, meanwhile, is limited to 2.3%, even though the country’s agricultural sector has been grappling with serious structural problems. The annual consumer inflation rate — just shy of 20% — owes much to soaring food inflation, which is likely to hit 30% by the end of the year.

The budget draft allocates 11.5% of all spending to the social security system, whose gaps have been rapidly growing, and only 8.4% to local administrations, where the opposition grew stronger in the 2019 municipal elections.

In sum, the government continues to ignore the fallout of the pandemic, keeping social spending at a limited level, while bracing to spend more on interest payments as a result of an ill-advised borrowing policy that threatens to further swell the public debt.