Two-thirds of the Turkish government’s tax revenues have come from indirect taxes on consumption, adding to the burden of low- and middle-income groups. 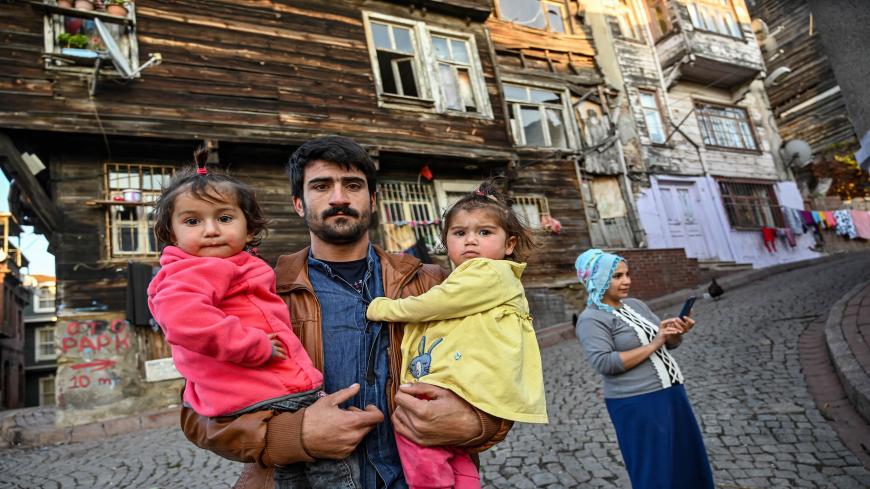 A man holds his children near their home in a deserted street near the Suleymaniye Mosque, during a weekend curfew aimed at curbing the spread of the coronavirus, Istanbul, Turkey, Dec. 6, 2020. - Ozan Kose/AFP via Getty Images

Unjust distribution of the tax burden — a major component of economic inequalities in Turkey — has further exacerbated during the coronavirus pandemic, but far from looking for remedies, Ankara has recently hiked taxes that affect low- and middle-income groups the worst.

Budget performance data, released in mid-January, show that tax revenues in the central government budget totaled 833 billion Turkish liras ($117 billion) in 2020, with the bulk coming from indirect taxes levied on consumption. Indirect taxes, including the value-added tax (VAT), the special consumption tax and the special communication tax among others, brought in 551 billion liras ($77 billion), accounting for 66% of all taxes, up from 61% the previous year.

The increase was due to Ankara’s encouragement of cheap credit, especially in the second half of 2020, to stimulate consumption and resuscitate the pandemic-ravaged economy. As a result, indirect tax revenues exceeded the government’s target by more than 12%.

Despite the more-than-expected tax revenues, the government posted a budget deficit of some 173 billion liras ($24 billion) last year, which led to more borrowing and thus a swelling public debt stock.

The new year began with fresh tax increases for Turkish consumers. The government raised the tax on communication services by 2.5 percentage points to 10% in late January before announcing a multifold hike on electric car taxes earlier this week. More increases are expected to follow in the coming days.

The extensive indirect taxes on consumption mean that low- and middle-income groups, which typically spend all their income to make a living, are effectively subject to taxation on the entirety of their incomes. Even the poorest of people, who rely on unemployment allowances or social welfare, pay taxes through every penny they spend. Meanwhile, high-income groups, which do not exhaust all their earnings, are effectively exempt from taxation on the incomes they put aside.

Turkey’s tax indicators lag behind that of the European Union, which it is seeking to join.

Despite the rise of neoliberal trends promoting less tax and less government spending since the 1980s, tax revenues in the 27-member EU amount to 27% of its gross domestic product (GDP). With the addition of social security contributions, the ratio rises to more than 41%. In Turkey, the rates stand at 17% and nearly 25%, respectively. Ireland and Romania have rates similar to that of Turkey, but in other EU states such as Belgium, Denmark, France and Sweden, the ratio of revenues from taxes and social contributions to GDP is well above the bloc’s average, exceeding 45% in some cases. Moreover, the share of indirect tax revenues in the EU is no more than 55%.

More than 50% of Turkey’s indirect tax revenues last year came from VAT, which is as high as 8% even on food items. Another 37% came from the special consumption tax, levied on fuel, spirits, tobacco, automobiles and durable goods. Exorbitant taxes on alcoholic beverages have long stirred controversy in Turkey, as many see them as an attempt by the government to curb alcohol consumption in line with its Islamic worldview. Raki, the anise-flavored national drink, for instance, has virtually become a luxury product, with consumers paying 131 liras ($18) in taxes on a bottle with a price tag of 180 liras ($25).

The indirect taxes — the easiest way of tax collection — place the heaviest burden on the shoulders of low- and middle-income groups, which burn through their incomes and often have to borrow to meet their needs. Moreover, 19 million wage earners, representing 70% of employment in Turkey, have their income taxes cut automatically from their salaries.

Government officials often pledge changes to ensure a fairer distribution of the tax burden, but little has changed on the ground. In 2019, for instance, then-Treasury and Finance Minister Berat Albayrak spoke of plans for “a new tax architecture” to reduce indirect taxes and increase direct ones in line with incomes. This has not only not materialized, but Ankara has further increased the indirect taxes.

Meanwhile, companies and banks often enjoy government favors, though their tax burden has been lighter, not to mention their potential means to dodge taxes. Corporate taxes paid by companies and banks accounted for only 12% of all tax revenues last year. The property tax, levied on inheritance and motor vehicles, contributed a mere 2%. Real estate taxes are not part of the central government budget as they go to local administrations.

In sum, Turkey’s current taxation system is far from ensuring tax justice. As such, it further worsens the income distribution gap. In late January, one of the country’s leading trade unions, DISK, called for legal amendments that would exempt the minimum wage of 2,825 liras ($397) from taxation and require the government to pay the social security premiums of minimum wage earners. DISK chairwoman Arzu Cerkezoglu argued that such an exemption would add about 750 liras ($105) to the minimum wage, which is what most employees earn in Turkey today. The government and parliament have yet to respond.