On top of sky-high taxes on liquor, the Turkish government has moved to thwart the home brewing of raki, the much-coveted national booze. 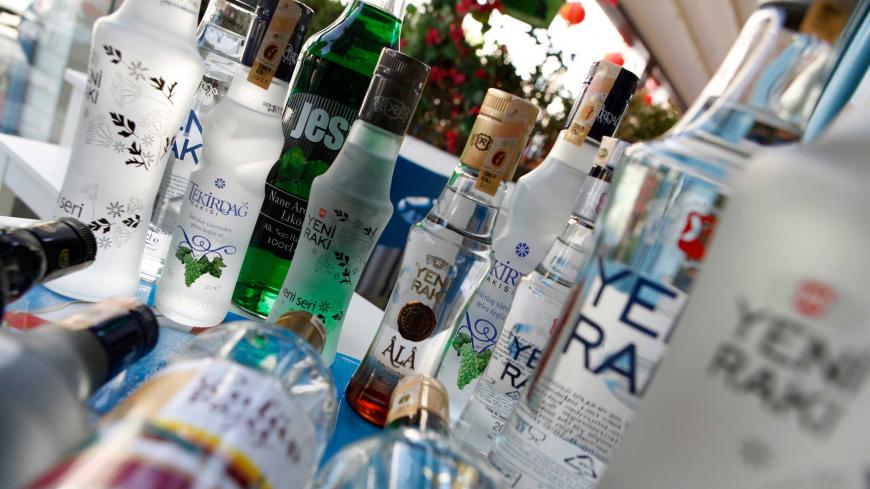 Raki bottles are displayed at a restaurant in Ankara, Turkey, Sept. 27, 2011. - REUTERS/Umit Bektas

“We have only raki left to relax. It brings us together with friends to chat. They cannot tolerate even that,” grumbled Selim Kaygusuz, a retired public servant in Ankara, disgruntled over the latest price hikes on the anise-flavored national booze. He recounted the good old days when he would meet with friends over a raki table four evenings a week or polish off a 70 cc bottle by himself. Now, he said, he has to make do with two evenings a week at most and only a few glasses of his favorite drink.

Despite its status as a national drink, raki is becoming increasingly out of reach for the ordinary Turk. The ruling Justice and Development Party, which promotes piety and a conservative way of life, has actively sought to discourage alcohol consumption, raining down taxes on booze, especially raki. True to form, the government raised liquor taxes at the beginning of the year, but this time went a step further, introducing a new regulation to trammel the home brewing of raki, which has flourished over the past several years in response to the soaring prices.

Under the regulation published Dec. 30 in the Official Gazette, ethyl alcohol, an ingredient widely used in the home brewing of raki, is now required to contain a certain amount of denatonium benzoate, an extremely bitter chemical compound that effectively makes it undrinkable.

The new requirement, however, does not apply to methyl alcohol, which is cheaper and often used by bootleg raki makers who care nothing for its poisonous effects, as evidenced by a series of deadly disasters in the past. In other words, the regulation deprives amateur raki makers of the harmless ethyl alcohol while leaving the door open to the use of the dangerous methyl alcohol.

The financial daily Dunya recalls how a similar spike in raki prices in the 1940s — a result of the economic fallout of World War II — led many boozers to turn to cheaper but hazardous substances such as methylated spirits. Alarmed over the risk of deadly consequences, then-Prime Minister Recep Peker lowered the raki price by 29%, which led to a two-fold increase in the consumption of raki and put an end to the demand for methylated spirits.

Seven decades later, the tax hikes, coupled with the latest move to curtail home brewing, may be pushing Turks to similar dangerous alternatives. Yet today’s government shows no intention of reducing the market price of raki. On the contrary, the barrage of price hikes seems bound to continue.

For raki lovers, the new year began with more bad news. On Jan. 3, the government hiked the OTV on alcoholic beverages by 7.1%, which, together with the corresponding increase in the VAT, brought the price of a 70 cc bottle of raki to 97.2 liras ($25.7). A minimum wage currently buys 16 bottles.

Can the bitter ethyl alcohol stop the home brewing of raki? It could certainly have a deterrent effect, but a total halt seems unlikely with prices running sky-high. Raki lovers have a reputation for strong loyalty to their drink, and many refuse to even consider alternative spirits, coveting the raki’s distinct anise flavor and the unique social culture that surrounds it. Home brewers are likely to seek ways to get hold of ethyl alcohol free of the bitter substance, which could give rise to a black market of its own.

In 2016, formal raki sales in Turkey fell to 35.4 million liters per year, down from 48.8 million liters in 2011, which was a record year. No doubt, the decrease did not mean that Turks had suddenly decided to abstain. Formal sales were down because of the flurry of price hikes, but home brewing was booming. For the market price of one 70 cc bottle of raki, amateur brewers are able to produce five 70 cc bottles at home. Retired people, in particular, have taken on the endeavor as a hobby, with aspirants exchanging know-how and experience on the internet. The home production of wine and beer has also proliferated, driven by a similar spike in market prices.

In sum, the government’s obstructive measures seem to curtail only the formal sales and thus its own tax revenues rather than the consumption. The home brewing boom has created an area of “unregistered consumption,” which is impossible to measure. Last year, Finance Minister Naci Agbal, who hails from the finance bureaucracy, conceded that taxes on several items, including alcoholic beverages, had reached a “really high” level, stressing that the government should focus on pursuing tax evaders rather than raising taxes. Yet given the ongoing tax hikes, his advice seems to have fallen on deaf ears in Ankara.

It should come as no surprise if the raki interventions intensify in the coming period. The home brewing of wine, beer and other fermented spirits is legally allowed, subject to a 350-liter limit per year, but the individual production of distilled spirits such as raki, whiskey and vodka remains illicit. Home brewers of raki risk fines and even prison sentences, yet with a critical election cycle looming next year, Ankara — for now — refrains from brandishing the threat of penalties.