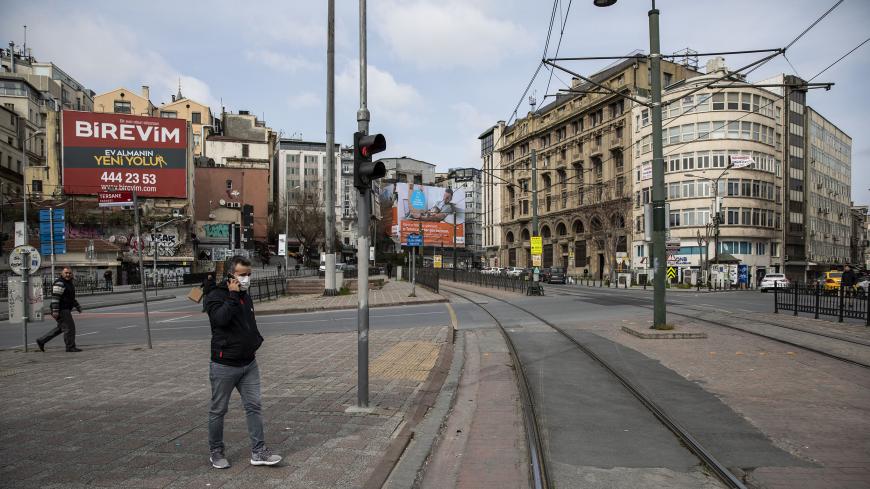 A general view of Istanbul is seen during the coronavirus emergency, Istanbul, Turkey, March 28, 2020.

The mounting coronavirus outbreak in Turkey has caught the government in a feeble financial state, leaving millions at grave economic risk. While many governments have opted for direct cash payments to cushion the economic shock of the pandemic, Ankara has delivered little in this respect, having run out of financial resources since a currency crisis in 2018. Pressure is building up on the government to deliver more to the vulnerable masses as experts warn the country has reached a make-or-break point in containing the fast-spreading contagion.

The concept of “helicopter money” — or free cash as if dropped from the sky — has emerged as a major social and economic measure in government efforts across the world to cushion the impact of the COVID-19 pandemic. The unconventional idea gained popularity during the 2008-2009 global financial crisis and earned Ben Bernanke, then the head of the US Federal Reserve, the moniker “helicopter Ben” for his advocacy of the concept.

By sharply hitting consumer demand, the coronavirus pandemic has set off a domino effect across economies that threatens to sink companies and households alike. Scrambling to contain the damage, the US, British and other governments have opted for dropping “helicopter money” to wage workers and the poor.

The large-scale programs in the 2008-2009 crisis relied mostly on monetary expansion measures by central banks, chiefly the US Federal Reserve, while fiscal expansion and public spending packages by governments were less prevalent. Today, however, monetary expansions appear less helpful in easing the panic as opposed to fiscal expansion policies and spending pledges by governments. The idea of “helicopter drops” on wage workers, the poor or those losing jobs is gaining support.

In the 2008-2009 crisis, budgetary discipline rules were flouted only for the purpose of rescuing companies. Although the current efforts involve that purpose, too, fund transfers to lower income groups have emerged as a distinct tool that governments hope will resuscitate demand. US President Donald Trump and British Prime Minister Boris Johnson, for instance, are braving further budget deficits to disburse funds to lower income groups, among other measures. Washington’s budget deficit stood at 5.6% of gross domestic product last year, and Trump appears prepared to see the rate increase to up to 10%. In other economic powerhouses such as the United Kingdom and France, the rate stood respectively at 1.5% and 2.5% in 2019. Germany, for its part, had a surplus of 1%, but Chancellor Angela Merkel has also acquiesced to going into the red.

In sum, there seems to be a consensus that the coronavirus crisis cannot be managed with the usual market-economy approach and that state interventions are needed at the expense of budget gaps, money printing and even the nationalization of some companies.

The United States and United Kingdom have taken the lead in dropping “helicopter money” in a bid to alleviate the shock. Washington’s plan includes direct payments of $1,200 to American adults who earn less than $75,000 per year, while the British government has pledged to pay 80% of the salaries of employees unable to work, covering wages of up to 2,500 euros ($2,755) a month.

One of the few social-minded measures expands access to assistance from the Unemployment Insurance Fund, called “short work payment,” which is paid over three months to employees of businesses forced to close temporarily. To benefit from the payment, employees are required to have worked at least 600 days in the past three years, and all Ankara did was reduce the condition to 450 days. The government remains under pressure to lift the condition altogether.

The package allocates an extra 2 billion liras ($307 million) to the government-run Social Assistance and Solidarity Foundations, which provide various forms of aid to the needy. Accordingly, the monthly funds made available to the foundations will increase by a third to 180 million liras (some $28 million).

Few appeared satisfied with the measures and opposition parties rained criticism on the government. The main opposition Republican People’s Party has called for monthly payments of at least 2,000 liras ($304) for needy families until the outbreak recedes, while the Future Party of former premier Ahmet Davutoglu has proposed an extra budget of 10 billion liras (some $1.5 billion) for the social assistance foundations, in addition to payments of 1,752 liras ($266) to 7.5 million low-income workers over three months, which requires another 40 billion liras (about $6 billion).

The criticism is unlikely to die down as the COVID-19 outbreak threatens to fuel unemployment in a country that already had 4.5 million jobless people last year. Fearful of joining the army of unemployed, many workers have had no choice but to brave the virus danger in crowded environments and continue heading to their jobs in factories, mines and construction sites.

While a social shield is a must for all vulnerable groups, including low-income workers, the jobless and those under the threat of losing jobs, the government’s attempt to make do with token measures has to do with the fragility of the Turkish economy, which has worsened since the start of the outbreak.

Turkey’s economic growth rate fell below 1% last year under the impact of the 2018 currency shock, yet a deeper recession was fended off through lavish use of central bank and treasury funds. The government even tapped 42 billion liras ($6.5 billion) from the central bank’s legal reserves, a sum the bank sets aside by law to use in extraordinary circumstances. While Ankara’s tax revenues declined amid the economic downturn, its security spending, stemming mainly from its military venture in Syria, placed further strains on the budget. As a result, it entered 2020 with unprecedented deficits and debt.

Moreover, state banks have often sold hard currency in markets to prop up the embattled lira and rein in foreign exchange prices. The interventions have consumed $40 billion that the central bank could have kept as foreign reserves.

In sum, Turkey’s economy was already weak and financial resources exhausted when the coronavirus hit, which explains why the government has been stingy.

Yet, pressure is growing on Ankara to do more. With many businesses closing shop, swelling the army of jobless, the government can hardly afford to ignore the calls for social support. To answer the calls, money printing appears inevitable down the road at the expense of further spoiling Turkey’s financial outlook in the eyes of foreign creditors.