The embattled Turkish lira has continued to nosedive and Turkey’s risk premium has climbed to new highs despite a package of government measures to stem the economic impact of the coronavirus pandemic. 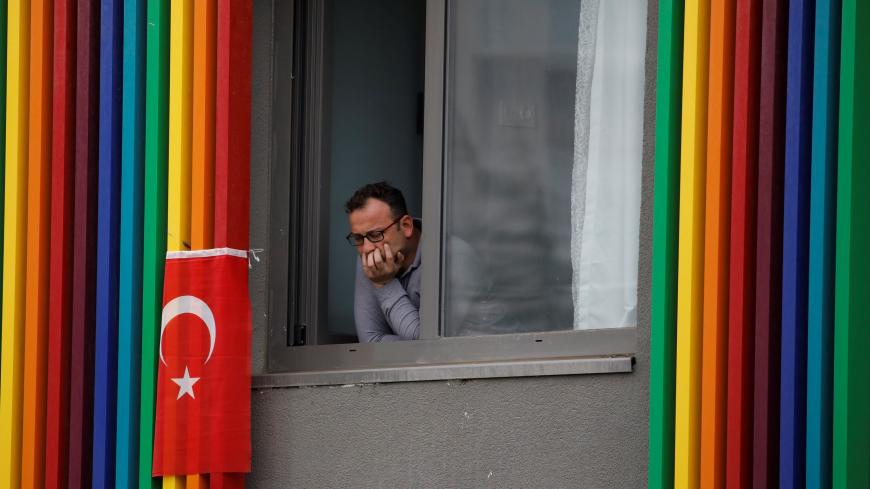 A man looks out from a dormitory where he is placed under quarantine in response to the spreading of coronavirus disease (COVID-19) after returning from abroad, in Istanbul, Turkey March 18, 2020. - REUTERS/Umit Bektas

Governments across the world have sprung into desperate action to curb the massive economic impact of the coronavirus crisis, but the efficiency of the measures remains largely uncertain in the face of a pandemic that is upending economic, political and social conventions.

Social distancing — the primary precaution to minimize fatalities — has abruptly hit consumer demand for a wide range of goods and services worldwide, which, in turn, is forcing halts in production. With all types of corporate assets sagging, governments are resorting to cliche monetary and fiscal remedies from other times of global crisis. The impact of these measures remains uncertain.

In Turkey, where the economy was already ailing since a severe currency shock in 2018, the central bank and the government have announced similar monetary and fiscal steps, but, in a sign of mistrust in the measures, the Turkish lira has continued to nosedive and the country’s risk premium has shot up.

The pandemic has forced consumers worldwide to limit their spending to urgent needs such as food and cleaning products. The sudden halt in business has sent stock markets into a meltdown, with companies in the dark on how long the turmoil will last and how they will cope with loan repayments, taxes and payrolls.

In a matter of two months, financial assets have suffered massive losses, barring those with very volatile and complex trends such as sovereign bonds, interest yields and gold. The US dollar has gained value as a safe-haven asset, with the dollar index rising nearly 5% against other major currencies. The currencies of emerging countries, including Turkey, have lost up to nearly 12% of their value against the greenback in the past two months. The Turkish lira has tumbled more than 8% against the dollar-euro basket.

In terms of the MSCI index, the stock markets of both the developed and developing worlds have lost an average of 31% in two months, with Turkish stocks falling 35%.

The drop in oil prices has been even worse, with the price of Brent crude plunging nearly 62% in two months.

Faced with such mammoth downtrends, the US Federal Reserve and other central banks have moved to loosen monetary policies in a bid to keep companies afloat. Governments have followed up with fiscal policy measures such as tax breaks, cash injections and even the option of voluntary nationalizations. Even German Chancellor Angela Merkel, famous for her fiscal discipline, has pledged stimulus measures at the expense of a budget deficit. Many countries are willing to offer citizens direct support such as cash handouts and vouchers — known as “helicopter money” — in a bid to salvage demand.

Turkey, too, was quick to enact similar measures, which are largely recipes used in the 2008-2009 global crisis. In an earlier-than-scheduled meeting March 17, the central bank lowered its benchmark rate by 100 basis points to 9.75%, the latest in a series of cuts aimed at leaving one recession behind and fending off the threat of another. The bank announced also measures intended to shield indebted companies and exporters from the pressure of banks and keep the real sector afloat.

The following day, President Recep Tayyip Erdogan unveiled a package of fiscal policy measures, which he valued at 100 billion liras (roughly $15 billion). Dubbed as the Economic Stability Shield, the package involves measures to relieve primarily companies, including a six-month deferral of various taxes and social security premiums, a three-month deferral of loan repayments to public banks and other assistance for those indebted to private lenders. Yet such measures appear unlikely to provide any meaningful relief at a time when many businesses are already bracing for layoffs and closing shop.

The president also pledged financial support to airlines and businesses in various branches of the tourism industry via Eximbank and public lenders. In a bid to stimulate loan channels, the limit of the credit guarantee fund will be doubled to 50 billion liras, he said.

Some measures in the package were truly perplexing and few could figure how they would help. The 18% value added tax in the aviation industry, for instance, was lowered to 1% for the next three months. The purpose of the cut remains elusive at a time when travel demand has plummeted and people are urged to stay home. The same goes for measures that encourage home purchases.

Erdogan’s package came under fire for prioritizing companies and banks, while offering little to the working class and the poor, who are bound to suffer joblessness and income losses in the pandemic crisis. The biggest gesture to workers was no more than a relaxation of so-called partial work payments from the Unemployment Insurance Fund to employees of companies forced to a halt. The poor were promised partial increases in existing social benefits, while citizens aged over 65 had to content themselves with free masks and germ-killing traditional cologne, a pledge that was met with sardonic smiles.

The measures announced by various governments are shrouded in uncertainty regarding how long they could last and how efficient they could be as few are able to predict how much the damage of the pandemic will grow. The crisis is “crushing” global economic growth, according to Fitch Ratings, which halved its forecast for 2020 to 1.3% this week from 2.5% in December.

Given the unprecedented nature of the crisis, the measures might well fail to deliver as much as expected. A failure to revive demand might lead to an avalanche of bankruptcies and even force nationalizations in strategic sectors.

Turkey is not immune to such a scenario, either. Many businesses in the services sector are already closing, and factories, small and big, are sending off workers on paid leaves. Absent a solution, the paid leaves will inevitably devolve into layoffs and send unemployment — already at nearly 14% — to more formidable levels.

Another inevitable conclusion is that the measures of Erdogan’s government have failed to inspire confidence among economic actors. The continued slump of the lira and the spike of Turkey’s risk premium to record highs in the vicinity of 600 basis points after the announcement of the measures speak for themselves.