The Turkish government is under fire for being less generous to its own needy citizens hit by the coronavirus crisis than it has been to Syrian refugees, who are said to have cost Ankara more than $40 billion. 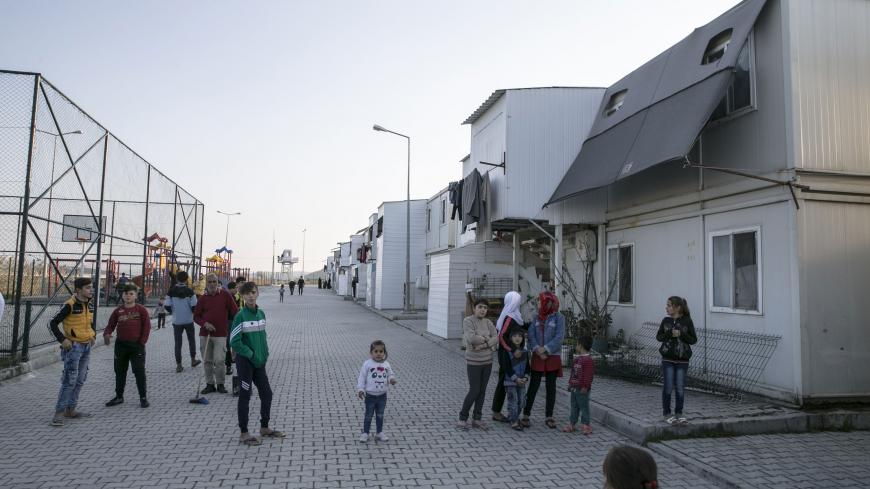 Whenever Turkey’s economy staggers and the public’s financial woes increase, the assistance extended to Syrian refugees becomes an issue for the cash-tight government. Ankara has had to tap the central bank’s legal reserves, a sum normally set aside for extraordinary circumstances such as war, and has spent more than $40 billion on 3.6 million Syrians since 2011.

The stimulus package that Ankara announced last month to help small and medium-sized enterprises and low-income citizens against the economic fallout of the coronavirus pandemic is worth only 100 billion Turkish liras, or about $15 billion, less than half of its spending on the refugees.

“Is the state now incapable of looking after its own people?” asked Faik Oztrak, deputy chair and spokesman of the main opposition Republican People’s Party (CHP), stressing that the spending on Syrians represented taxpayers’ money. Speaking to Al-Monitor, Oztrak said heedless spending was not limited to the refugees, noting that billions of liras flowed into the pockets of a handful of contractors as part of “client guarantees” in infrastructure projects such as motorways, bridges and airports, which the pandemic has rendered largely unused at present.

Social distancing measures have forced many to “choose between health and work,” Oztrak said, adding, “If you want people to stay home, you have to offer them a minimum income for their livelihoods.”

Umut Oran, another CHP member and former vice president of the Socialist International organization, said the government’s support package was insufficient and funds at least equaling the money spent on Syrians should be disbursed to citizens in dire straits. “To weather these days, poor people should be given assistance worth the minimum wage over three months, and the situation should be reviewed again after that three-month period,” he told Al-Monitor.

But does the government have the funds to provide this “helicopter money”?

Despite the use of 40 billion liras ($6 billion) from the central bank’s legal reserves last year, the state of Ankara’s budget is hardly so bright as to be able to “airdrop” money to the poor. The central bank continues to prop up the government.

The bank is expected to funnel up to 55 billion liras ($8.15 billion) to the budget this year, including legal reserves, corporate tax and advance payment of profit shares. Nevertheless, the central government budget appears bound to go into the red again after a deficit of 123.7 billion liras ($18.33 billion) last year. In February, the deficit stood at 7.3 billion liras ($550 million).

With tax-revenue prospects dimming due to shrinking consumer demand and the closure of businesses amid the outbreak, the government’s attempt at a remedy came in the form of a donation campaign to help low-income groups.

President Recep Tayyip Erdogan launched the campaign March 30 with a donation of seven months of his salary. The campaign got off to an active start, with public entities, including banks, as well as groups and business people close to the government announcing sizable donations. The grants could well be aimed at winning the president’s graces, and CHP leader Kemal Kilicdaroglu, a former Finance Ministry officer, was quick to note that the donations of business people were tax deductible.

The CHP-held local administrations in Ankara and Istanbul had also launched fundraisers. Opposition quarters had shown great interest in the campaigns. Meral Aksener, the chairwoman of the Good Party, donated three months of her pension to both campaigns. The Interior Ministry, however, issued a circular March 31 blocking the fundraisers of the municipalities and locking the bank accounts of the campaigns, prompting the municipalities to initiate court action to reverse the bans.

The government’s attempt to hinder the opposition’s efforts shows that the issue of assistance has already been politicized. And who will benefit from the donations?

According to a 2019 report by DISK, a confederation of trade unions, 16 million people in Turkey are poor and another 18 million live at the poverty threshold.

The donations are unlikely to reach a sum large enough to fund all of the poor. Even a one-off disbursement of 1,000 liras (roughly $150) to 34 million people would require 34 billion liras ($5 billion). The donations totaled some 846 million liras ($126 million) in the first three days, including 100 billion liras ($14.8 billion) from the central bank, despite the enthusiasm that marked the launch of the campaign.

The government assistance, meanwhile, is aimed at only two million families designated as welfare recipients before the outbreak, and not the larger populace described in the DISK report. These families, which had their electricity bills covered last year, will now receive 1,000 liras ($148) each as government aid over the outbreak.

The assistance the package offers to other segments is questionable. For 13 million pensioners, for instance, it contains merely an early disbursement of an existing holiday bonus, which was supposed to be paid in May. Moreover, the bonus remains at last year’s 1,000 liras, without any compensation for inflation. People over age 65, meanwhile, are promised only a mask and a traditional bottle of cologne to use as disinfectant.

Remarkably, the package includes measures to help troubled contractors by encouraging home sales. The loan limit for homes worth less than 500,000 liras ($74,500) was raised from 80% to 90% and the minimum down payment was set at 10%.

Regarding the taxes and loan debt of small- and medium-scale enterprises, the government has offered only deferrals. It is anyone’s guess how small shopkeepers will repay their debts once the deferral period ends and they remain out of business.

Some measures are simply laughable. The value added tax on air transportation, for instance, was reduced to 1% from 18% as of April 1, at a time when flights have largely stopped and people are urged to stay home.

When it comes to electricity and gas bills, widely anticipated discounts have not materialized. Instead, the authorities have pledged there will be no price hikes for gas in April and electricity in the second quarter.

With the government short of budgetary means to support the needy, the benevolence of those contributing to the donation campaign is commendable. Yet not all donors appear to be volunteers. Public servants have reported receiving verbal or written instructions by their superiors to give to the campaign. A letter from the newly elected head of the Court of Appeals urging judges and prosecutors to make donations has made the rounds on social media.

Salaried people in particular have seen their purchasing power shrink in the past six years under the impact of Turkey’s depreciating currency. Still, it seems the burden of helping the poor will be foisted on public servants already in financial hardship. It is against this backdrop that the opposition is calling the government to account for prodigal spending. Hence the money spent on Syrian refugees is being brought up.

Some observers have suggested that Erdogan donate the $400-million plane that Qatar gifted him in 2018 to the campaign.