Despite its deepening financial woes, Turkey’s government has rolled out an unprecedented $6 billion package to court favor with voters ahead of the June 24 polls. 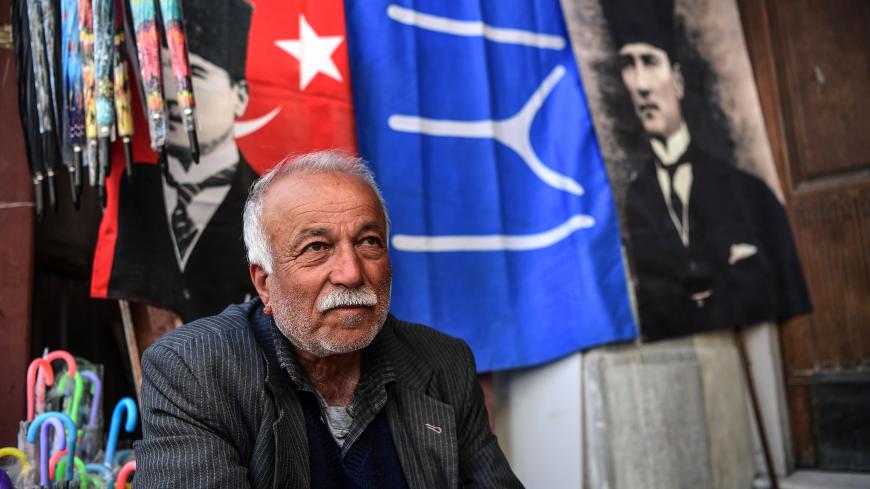 A man sits in front of poster flags of Mustafa Kemal Ataturk, the founder of modern Turkey, near a spice bazaar in the Eminonu district, a day after President Recep Tayyip Erdogan called snap elections for June 24, Istanbul, Turkey, April 19, 2018. - OZAN KOSE/AFP/Getty Images

Ahead of each general election, Turkish governments typically loosen the purse strings to offer economic benefits to voters, mainly pensioners, minimum wage earners, farmers and small-business owners. Still, the incentives package announced this week ahead of critical parliamentary and presidential polls on June 24 is unprecedented in recent history. The scope of the package is so broad that it is of interest to virtually the entire population.

One of the most hotly debated items in the package, announced April 30, is the promise for two bonuses to pensioners this year. The plan has conjured up the pledges the main opposition Republican People’s Party (CHP) made ahead of the June 2015 elections, including similar bonuses for retirees and a notable increase in the minimum wage. The ruling Justice and Development Party (AKP) sought to discredit the pledges as deceptive and inapplicable due to budget constraints. Finance Minister Mehmet Simsek even said he was ready to vote for the CHP if it managed to pull it off. Since its re-election, however, the AKP has appeared willing to implement the same CHP proposals it had so disparaged. First it raised the minimum wage and now, less than two months ahead of the polls, it has decided to give pensioners bonuses of 1,000 liras (about $240) for the two main Islamic holidays this year, in June and August.

CHP deputy chair Aykut Erdogdu, an economist by profession, tweeted May 1, “Mehmet Simsek made a promise: He will be voting for us in the elections.”

The package includes several other incentives.

The pro-government daily Sabah hailed the package as “good news for 81 million” — the whole nation. According to the report, some 12 million pensioners as well as members of the security forces made disabled in the line of duty and relatives of fallen soldiers and police will benefit from the two 1,000 lira bonuses. About 600,000 elderly people will see their monthly allowances almost double to 500 liras (about $120). Some 13 million buildings without deeds will get a chance at registration, while amnesty for university students dismissed for various reasons over the years is estimated to affect up to 500,000 people.

The package also offers restructuring for various debts that citizens owe to the state, including taxes, social security premiums, traffic fines and highway tolls, according to the report. A repayment period will be extended to 36 months, and those who opt to repay in one payment are entitled to a 90% deduction from late fees. The precise number of people eligible to benefit from this incentive is unknown, but it is certainly in the millions. Along with further gestures to citizens in a few specific categories, the package includes a 16% hike — higher than the inflation rate — in the price at which the state will buy tea crops, the mainstay of millions of people in the Black Sea region.

The package has left the opposition under pressure to offer more. Soon after the package was announced, the CHP’s Erdogdu tweeted, “You may have stolen our past election pledges, but the dreams for a better future are still ours. Stay tuned for our election manifesto.”

Meral Aksener, the leader of the newly founded Iyi or Good Party that many see as a credible challenger to the AKP, opined that the package reflects the government’s fear in the face of a strengthening opposition. “So, you needed to be frightened from us to remember the people,” she tweeted.

The package comes at a time of serious economic strains for Turkey, including budget deficits, surging inflation and a nosediving currency. Ironically, it was rolled out on the same day the International Monetary Fund warned Ankara to tighten spending. The Turkish economy “is showing clear signs of overheating,” read the statement, adding, “Monetary policy appears too loose and its credibility is low.”

Prime Minister Binali Yildirim put the cost of the incentives between 22 billion and 24 billion lira (roughly $6 billion), raising questions on how the government dare shoulder such a huge burden at a very challenging time for the economy.

According to the prime minister, the revenues that would come from the registration of unlicensed properties would cover and even exceed the cost of the package. Those revenues, however, will be one-offs, and the measure is already under fire as it is essentially pardoning illegal construction.

The package aside, nearly 15 million Turks are already benefitting from various government programs of welfare assistance, including monthly payouts and material aid, that has steadily expanded over the years. In December, Family and Social Policies Minister Fatma Betul Sayan Kaya said the total amount of welfare assistance had reached 38 billion liras ($9 billion) per year, up from 1.4 billion liras ($340 million) 15 years ago.

Ever since the AKP came to power in 2002, welfare assistance has been the strongest card of the government, enabling it to connect with various sectors of society from children, students and the elderly to the handicapped and the jobless. Recipients of such aid have become an important element in the AKP’s electoral force. To better illustrate the significance of the 15 million recipients, one could perhaps point out that the number of CHP voters in 2015 stood at 12.1 million.

This year’s election season coincides with the holy month of Ramadan, which means that additional handouts are likely to pour from municipal administrations. June is also the month when retirees receive their annual pension raises, and this year they might enjoy one above the inflation rate.

Whether the incentives will sway the election results is hard to predict, as Turks face the bitter reality of rising costs of living including food prices, fueled by inflation and the ongoing deprecation of the lira.

The AKP is in for what pollsters suggest will be a very close race.