Turkey’s ruling party, under opposition fire for failing to combat poverty, took a fresh blow in the run-up to elections as official statistics put 22.4% of Turkish households below the poverty line. 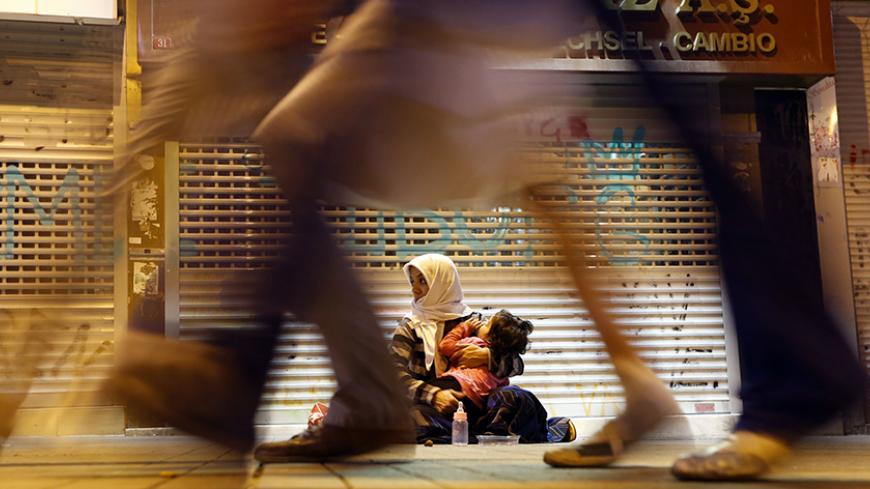 A woman holds a child as she begs for money near Taksim Square in Istanbul, June 19, 2013. - REUTERS/Marko Djurica

With only weeks to go before Turkey’s June 7 elections, opposition parties are heavily focusing on economic problems and social welfare, generating huge voter interest and pushing the Justice and Development Party (AKP) to the defensive for the first time.

The main opposition Republican People’s Party has cornered the AKP with a series of promises targeting the popular masses, including a hiked, tax-free minimum wage of 1,500 Turkish lira ($561) per month and two bonus pension payments per year for about 11 million retirees. The two other main opposition forces, the Nationalist Action Party and the pro-Kurdish People's Democracy Party, are campaigning on similar platforms targeting workers, farmers and retirees.

Social welfare support, including handouts of food and coal for heating and various financial aid schemes for poor families, used to be the AKP’s primary trump card in previous elections. This type of assistance, aimed at millions of low-income or impoverished people including housewives, the elderly and the jobless, has proven to be the ruling party’s biggest success story ever since it swept to power in 2002 with promises to end corruption, poverty and political prohibitions. After 13 years of AKP rule, however, it turns out that poverty has actually increased in Turkey, becoming the opposition’s biggest advantage in the elections.

Opposition parties maintain that far from fighting poverty, the AKP has pursued a deliberate policy of poverty management, exploiting the poor for its political ends and reducing the sector to a voter reservoir. The opposition is now pledging to genuinely stamp out poverty.

Pushed to the defensive, the AKP argues that the opposition’s pledges are unrealistic and that Turkey lacks the funds to see them through.

The AKP found itself further cornered on May 5, when the government-controlled Turkish Statistical Institute (TUIK) released a survey, “The Family in Statistics 2014,” which provided an official illustration of the level of poverty in Turkey. According to the survey, 22.4% of households, or nearly a quarter of Turkey’s population, live below the poverty line.

TUIK and other government agencies, however, employ a different method to calculate the minimum wage and the hunger threshold and poverty line, based on the income of working individuals and the total monthly income in a given household. Accordingly, people with a monthly income of less than a third of the minimum monthly wage — less than 316 lira ($118) — are considered poor.

According to the TURK-IS criteria, nearly 50% of Turkey’s population is at the poverty line, while the latest TUIK survey puts the figure at 22.4%.

Strikingly, the survey shows that the poverty rate raises significantly as families get bigger. In households comprising two parents and three or more children depending on them, the poverty rate rose to 49.6% in 2014 from 41.9% the previous year. The rate was also higher among people aged over 65 and living alone, rising from 15.1% to 17.9%.

The figures indicate that the opposition’s pledges for pension hikes and bonuses for the retired are timely. And the pledge for 720 lira ($280) in monthly support for crowded families, 49% of which live below the poverty line according to TUIK, comes as a further challenge to the AKP’s policies.

The rampant poverty, meanwhile, is compounded by a series of social problems, including a rise in domestic violence and divorce.

Despite government policies encouraging young people to marry early and have at least three children, TUIK figures show that marriages are down by 0.1% and divorces up by 4.5%.

As more families fall below the poverty line, suicide statistics add to the alarm. TUIK has yet to announce the suicide figures for 2014, but the statistics of the year before offer some clues. In 2013, family discord, finanicial hardship, unemployment and business trouble accounted for 18.1% of documened reasons for suicide. And given that the reasons for 53.8% of suicides remain unknown, the actual number of people who committed suicide under economic strain is likely to be higher.

The suicide statistics, an important sign of the social impact of poverty, confirm a widespread sense of desperation in a country where the unemployment rate is climbing toward 12%, meaning there are more than 6 million jobless people, in addition to millions facing litigation, unable to repay credit card debts.

In sum, despite all the government’s arguments, its own agency has officially confirmed the plight of the low income masses and the rise in poverty. Economic deterioration is bound to be one of the determining factors in the upcoming polls.