According to economists and Turkish seniors' personal accounts, the elderly who suffered most during the COVID-19 pandemic are now being hardest hit by the economic slump. 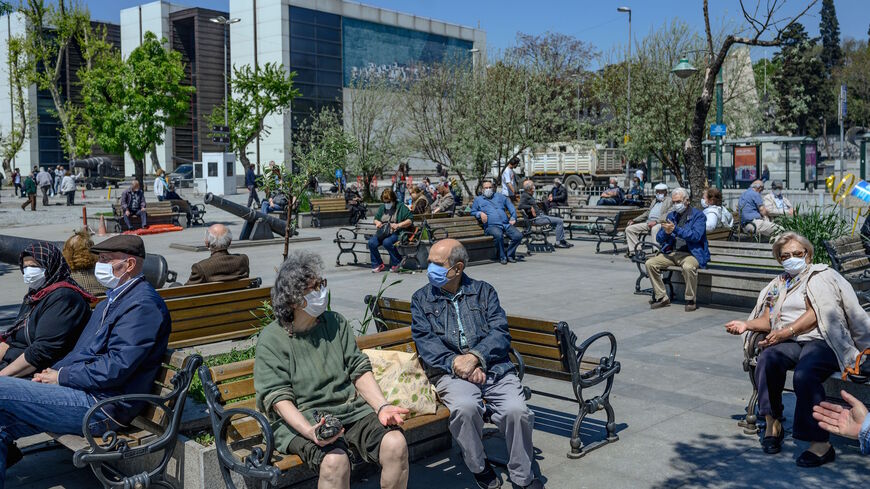 Elderly people wearing protective masks sit and look at the Bosporus on May 10, 2020, at Besiktas, Istanbul, after a month and a half of lockdown restrictions aimed at stemming the spread of the novel coronavirus. - BULENT KILIC/AFP via Getty Images

ISTANBUL — A recent visit by opposition politicians to a pensioners’ association has highlighted the plight of those hit hardest by Turkey’s highest rate of inflation in two decades.

Retirees across the country have seen their income ravaged by price increases of 36.08% year-on-year, according to official figures. Unofficially, independent economists at ENAGrup, which analyses thousands of prices, put the annual rate at 82.81%.

Much of the issue lies with the data on which pension levels are determined, according to critics.

The Turkish Statistical Institute, or TUIK, is the government agency responsible for producing a wealth of information on the country, including its economy and demographics. It has been widely criticized for bending the figures to paint a more positive economic outlook.

“It’s our promise that when we arrive [in office] we will equalize the minimum pension with the minimum wage,” Agbaba said. “One of the first things we will do when we come will be to organize TUIK.”

Kazim Ergun, president of the association, added, “Pensioners must be rescued from TUIK's calculations. Everyone should be able to get a decent pension.” He called for the situation to be resolved “in a manner worthy of human dignity.”

In its September report on global social protection, the International Labor Organization found Turkish pensioners to be among the world’s poorest. The level of pensions in Turkey was 22% of the value of the national poverty line, meaning “the pension is not sufficient to prevent old-age poverty,” the report said.

In May, the Istanbul Political Research Institute found that 12% of over-65s in Turkey were still in the workforce, likely due to “the nonexistence of social benefits and inadequacy of pensions.” The retirement age is 60 for men and 58 for women.

The findings were supported by a group of pensioners playing cards in a tea shop in Istanbul’s Kadikoy neighborhood.

Burak Sezgin, 64, said he had seen his modest savings depleted by inflation and the fall of the lira, which lost 44% of its value against the dollar last year.

“It is very hard to live on a pension these days,” he said. “Everything is so expensive. I spend as much time as I can here because it means I can keep my fuel bills down at home. I used to be able to spend most of the day here with my friends but now I can only afford a few glasses of tea.”

Energy costs for residential customers were bumped up earlier this month, just as temperatures plummeted. The price of natural gas rose 25% while electricity went up by half. The government has said it will subsidize the gas bills of low-income households.

Kenan Gormez, 65, said the elderly had suffered most during the COVID-19 pandemic and are now being hardest hit by the economic slump.

At the start of January, Health Minister Fahrettin Koca warned that nearly nine out of 10 COVID-19-related deaths the previous month were among the over-60s and those with chronic illness as Turkey was hit by the omicron variant.

Senior citizens and the chronically ill were subjected to 24-hour curfews for months at a time in the earlier stages of the outbreak.

“It seems like we’re being punished twice — first by the coronavirus and then by inflation,” Gormez said. “We worked all our lives and should be able to enjoy our retirement but life is even more of a struggle these days.”

Cafer Tufan Yazicioglu, legal adviser to the Turkish Pensioners’ Association, said the group was fighting for parity among retirees.

“We want to see a rise that takes inflation into account,” he told Al-Monitor. “While civil servant retirees got a 5% increase, the raise for most other retirees was only 2.5%".

He went on, “Increases in the income and pensions of retirees should have prevented the loss caused by price and exchange rate increases in purchasing power. There should be no distinction between retirees. We want the authorities to reevaluate the demand for additional raises, taking into account the principle of equality.”

Announcing the pension increases earlier this month, Erdogan said he was “saddened” by the situation.

“It was us who brought down inflation to the lowest rates,” he said. “We are determined to bring it back to single digits as soon as possible.”