Glossing over unpleasant economic news has become a notable trend in the Turkish media as the country heads to local elections in the grips of economic woes. 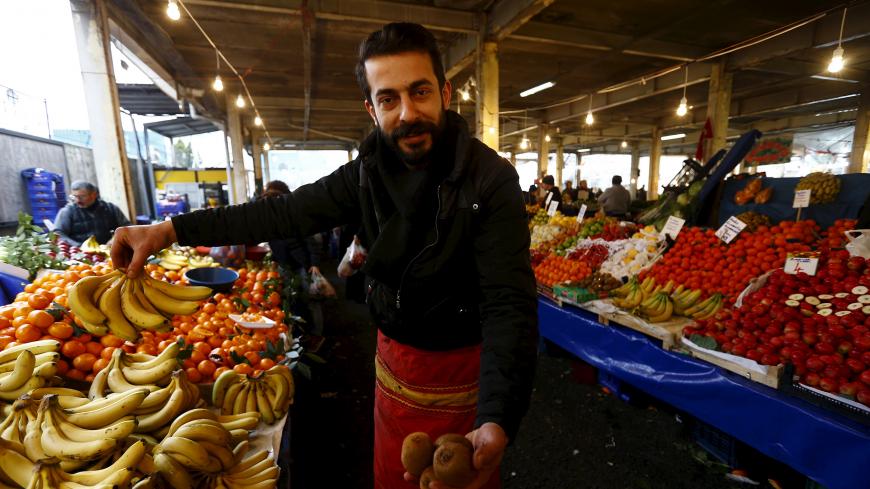 A stallholder sells fruits at a bazaar in Istanbul, Turkey, Jan. 30, 2016. - REUTERS/Murad Sezer

As Turkey grapples with a serious economic downturn, some in the Turkish media display a novel propensity to present negative economic news in a positive light. The coverage they offer is often the opposite of what the economic data signal. Indicators pointing to recession are portrayed as positive developments, and negative data such as high inflation are transformed into good news. Leading this trend of glossing over ill-auguring figures are media outlets close to the government.

One of the most striking examples pertains to inflation. In 2018, consumer prices in Turkey shot up 20.3%, atop an increase of 11.92% in 2017. Last year’s inflation was the highest since 2002, when the Justice and Development Party (AKP) came to power. In 2003, the AKP’s first full year in power, consumer inflation hit 18.4% and never exceeded 20% in the ensuing years.

Many pro-government media outlets, however, have heralded “good news” to the public, linking the inflation rate to the pay hikes that workers, public servants and pensioners would receive, rather than delving into the mounting cost of living.

Moreover, the pay raises at the end of the year could hardly qualify as “good news,” given the even higher inflation in some basic subcategories and products. In the food and non-alcoholic beverages rubric, which is of direct concern to low-income groups, inflation reached 25.11%. Prices rose 184% for onions, 91% for tomato paste, 75% for potatoes, 61% for leeks, 57% for long green peppers, 43% for eggplants and margarine and 36% for cucumbers, to mention a few.

For millions of workers, public servants and retirees, however, salary and pension hikes at the end of the year were determined on the basis of the overall 20.3% inflation. Such was the illusion the media created that people were virtually made to hope for higher inflation.

Media outlets critical of the government, meanwhile, seemed “disappointed” when inflation fell month-on-month in November and December, an attitude that has to do with their distrust of the official inflation figures. The Sozcu newspaper wrote in December that the 1.44% decline in consumer prices in November “dashed the hopes of millions of public servants and pensioners for a [good] pay raise.”

Retirees, in particular, grumble that the inflation basket contains too many items that they do not usually consume or are beyond their reach. Pensioner Selim Durmaz, for instance, said many retirees with low pensions could seldom allow themselves relatively expensive products such as sausages, baklava, alcoholic beverages or computer equipment that figure in the inflation basket. “They should raise pensions according to the price increases of products that pensioners consume,” he added.

Another key issue is the minimum wage. In late December, the government raised the minimum wage 26% to 2,020 Turkish liras (about $370), which pro-government media also trumpeted as “good news.” Even the head of a major trade union, who took part in the negotiations with the government, hailed the decision as “a handsome pay raise.”

The oppositional daily Cumhuriyet, meanwhile, made a comparison in dollars, according to which the new minimum wage was worth $43 less than last year’s, given the dramatic slump of the Turkish lira, which lost nearly 30% of its value in 2018.

Foreign trade and the current account deficit are two other areas where seemingly positive figures contain negative signals for the economy.

In 2017, Turkey’s rate of exports covering imports stood at 67.1%, with exports amounting to $156.9 billion and imports to $233.8 billion. In 2018, the coverage rate rose to 75.3%, as exports increased to $168.1 billion and imports fell to $223.1 billion. Last year’s current account deficit has yet to be released, but officials expect it to fall below $30 billion in light of the decrease in the foreign trade deficit. The decline in current account deficit in 2018 has been the largest in nine years. But do those figures reflect positive developments in the economy?

Despite a significant rebalancing compared to previous years, the seemingly positive data stem from shrinking domestic demand, which is, in fact, an alarming sign of recession.

The country’s foreign trade deficit remains as big as $55 billion, despite the increase in foreign exchange prices and the shrinking domestic demand. Moreover, a narrowing current account deficit is the natural outcome of a contracting economy.

For Faik Oztrak, a former treasury undersecretary and now deputy chairman of the main opposition Republican People’s Party, the foreign trade and balance of payments figures speak not of a success, as the government presents them, but of gloomy days down the road.

“The foreign trade deficit declined to $55 billion in 2018, but we see that imports dropped 11.5% in investment goods and 19.7% in consumer goods,” he told Al-Monitor. “This shows that both consumers and investors have lost appetite due to the currency shock and increasing uncertainties and that the economy has begun to seriously contract.”

Ufuk Soylemez, a former state minister for the economy, believes that Turkey faces a protracted type of crisis, which will take 12 to 18 months before improvement begins.

Referring to the March 31 municipal polls, he told Al-Monitor, “Instead of taking the necessary measures, the government is doing populist things ahead of the elections that are deepening the crisis. It keeps announcing tax amnesties, incentives and supports. The problems are being deferred. The debt crisis of the real sector is being offloaded onto the banking sector. Such steps are exacerbating the crisis.”

Some pundits believe that Turkey has no option left but to seek a bailout deal with the International Monetary Fund (IMF).

“With or without the IMF, a harsh belt-tightening policy appears inevitable after the March 31 local polls,” Soylemez said. “In case of a further delay, the crisis, which started in the real sector, might spill over to the financial sector."