The shrinking Turkish economy needs external funds to start growing again, but luring foreign investors back is a tall task that Turkey is unlikely to accomplish in the short run. 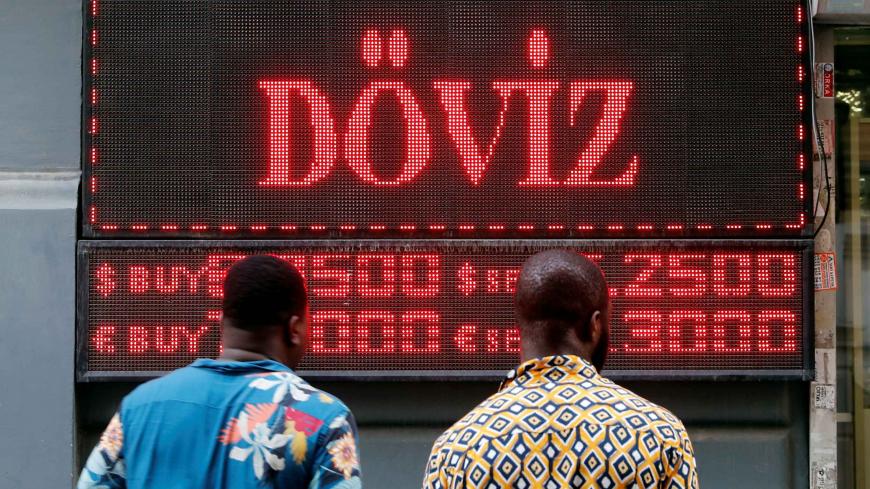 People look at a display board of a currency exchange office in Istanbul, Turkey, Aug. 28, 2018. - REUTERS/Osman Orsal

The Turkish economy entered turbulence in the second half of the year amid a sharp increase in foreign exchange prices, which, in turn, fueled inflation. Though the president maintained there was no crisis, successive indicators spoke of a rapid downturn. Finally, the growth data for the third quarter — released Dec. 10 by the Turkish Statistical Institute (TUIK) — offered a telling picture of what is going on.

According to TUIK, Turkey’s gross domestic product (GDP) grew only 1.6% in the third quarter, down from 5.3% in the second quarter and 7.2% in the first one — a sharp decline that matches the definition of recession. For Turkey’s economy, a growth rate of 5% to 6% is considered “the normal.” Thus, the 1.6% rate in the third quarter indicates that the economy is now “officially” in recession.

A sectoral analysis of this state of recession, combined with available indicators for the fourth quarter, show that the turmoil is devolving into a contraction and depression. Given the high inflation marking the turmoil, one could speak even of slumpflation, which is a very difficult type of a crisis.

The sectoral analysis offers little optimism for the coming period. The agricultural and industrial sectors grew only 1% and 0.3%, respectively, in the third quarter, while the construction sector — the star of the economy in the past 15 years — shrank 5.3%, becoming the first to plunge into crisis.

Looking at the spending rubric, one could also observe that the growth rate fell to 1.6% despite some improvement in exports due to the depreciation of the Turkish lira and an increase in government spending. Final consumption expenditure of resident housholds grew only 1%, while durable goods consumption shrank by a frightening 24%. While public spending grew 7.5%, this rate is hardly sustainable, given also the government’s stated commitment to budget discipline. The increase in exports did contribute to growth, but remained modest despite the big slump of the lira.

Investments, meanwhile, did not grow at all, but rather declined 3.6%, which is another indication of depression in the next quarter.

In terms of dollars, the year-on-year GDP decreased by $48.8 billion to about $833 billion. Accordingly, GDP per capita in the third quarter decreased by $284 from last year, falling to $10,272. The figure falls further to some $9,700 if more than 4 million immigrants, most of them Syrians, are added to the country’s population.

The labor force, meanwhile, has seen its share from the GDP decline. Payments to labor stood at about 31%, down from about 38% in the first quarter.

The outlook of the third quarter makes the fourth one rather obvious. With inflation running at more than 20%, the Turkish economy is contracting.

Despite a 1.4% drop in inflation in November — a direct result of Ankara’s tax reductions to rejuvenate the market — year-on-year consumer inflation stands at 21.5% and is likely to hit 22% by the end of the year. Among emerging economies, the only inflation comparable to that of Turkey’s is seen in crisis-hit Argentina, running at about 45%.

Along with this sticky inflation, a rapid decline is observed in imports, which reflects the industry’s shrinking demand for imported raw materials and machinery. This constitutes the most important sign that the economy has stopped growing and even began to contract. As a result, Turkey posted a current account surplus of $1.4 billion in the third quarter, in the wake of deficits of $16 billion and $15 billion in the first and second quarters, respectively.

The abrupt reversal in the summer was marked by severe political tensions between Ankara and Washington, which bore heavily on investor sentiment. As foreign exchange prices shot up amid the foreign exodus in the third quarter, imports almost ground to a halt and the current account deficit turned to a surplus. To compensate for the fleeing funds, Turkey appears to have used $9 billion from its reserves, while another $8 billion came from unknown sources that appear in the “net error and deficit” section of the country’s balance of payments.

In sum, the figures show that foreign funds are no longer coming to Turkey and that money has become more expensive abroad. Indeed, the foreign exchange movements in October offer another sign of Turkey’s transition from recession to depression. The flight of foreign money continued in October, reaching $1.5 billion in that month alone and $20 billion since July. This means that the Turkish economy, which is unable to grow without foreign funds, will continue to ail until the confidence of foreign investors is restored.

The official growth rate in the fourth quarter will be released in March, but pundits are already forecasting a contraction of at least 3%, which would put the overall growth rate for the year at less than 2.5%. The international credit rating agency Moody’s is even more pessimistic, predicting a 1.5% growth for 2018 and a 2% contraction in 2019.

To start growing again, the Turkish economy needs a meaningful inflow of foreign capital. And the return of foreign investors depends on the improvement of domestic indicators, primarily inflation, and a significant easing in Turkey’s risk factors, meaning that the country’s risk premium should decrease at least by half to some 200 basis points. This, however, is not likely to happen soon.