Why Turkey’s growth data has economists scratching their heads

Turkey’s latest growth data, which suggests the economy rebounded strongly in the fourth quarter of 2016, appears out of sync with other key indicators, fueling doubts over Ankara’s new calculation method. 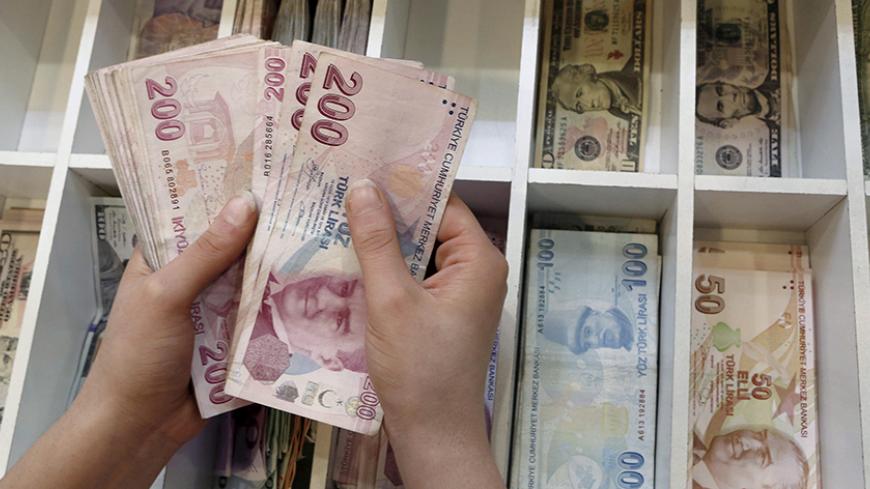 On the data calendar of the Turkish Statistical Institute (TUIK), March 31 was the day to release the country’s fourth-quarter economic growth for 2016 and thus the overall rate for the year. The figures came as a surprise. Following a contraction in the third quarter, the Turkish economy rebounded strongly in the fourth quarter, growing 3.5%. This put the overall growth rate for 2016 at 2.9%. Hungry to showcase some economic success, Ankara was in an upbeat mood, but the figures rekindled questions on just how reliable the data is — a debate that had flared in December, when TUIK announced a retrospective revision of whole data sets, using a new calculation method.

For the majority of Turkish economists, excluding those who curry favor with the government, the credibility of the data is questionable.

The introduction of a new calculation method last year had resulted in a staggering upward revision in the gross domestic product (GDP) for 2015. The revised figure stood at $861 billion, a 20% increase from the original one.

According to TUIK, the Turkish economy grew 2.9% last year, based on local currency and with inflationary adjustments. When the GDP in current prices is divided by 3.04 Turkish lira, the dollar’s average exchange rate last year, the GDP amounts to $857 billion. This places Turkey among the world’s 18 largest economies. The per capita income in dollars is $207 less from 2015, but the $10,807 figure still makes the government happy.

Based on the $857 billion figure, the current account deficit of $32.5 billion is 3.8% of GDP, and the country’s $404 billion foreign debt stock at the end of 2016 amounts to 47.1% of GDP. Hence, despite the nearly 3% growth rate, the Turkish economy retains its “fragile” status amid the Turkish lira’s dramatic depreciation against the dollar, the resulting deficits and a foreign debt burden that has not downsized.

Government ministers and President Recep Tayyip Erdogan hailed the figures, quickly adding them to their talking points for the April 16 referendum, which will seal the fate of constitutional changes designed to equip the presidency with sweeping executive powers.

True to style, Erdogan gloated at credit rating agencies, which he has frequently slammed for unfairly cutting Turkey’s grades. “Look, Turkey has grown 2.9%,” he told the crowd at an April 2 rally. “Remember those renowned economic assessment agencies that I use to dress down? [The growth rate] turned up 1 point higher than their forecasts." He then used soccer terms to make his point: "This means another curve ball. They should keep in mind that this nation is good at scoring penalties [penalty kicks].”

Deputy Prime Minister Mehmet Simsek was happy the economy had come back from the verge of recession despite global financial trends that diverted money from emerging economies, a decline in tourism revenues as a result of the crisis with Russia and a string of terrorist attacks, shrinking agricultural production and the political clamor from the coup attempt last year. “The Turkish economy has continued to grow despite all those shocks. … [It] has rapidly overcome the shock of the treacherous coup attempt and has not technically entered recession,” he said in a March 31 statement, claiming that a “yes” outcome from the referendum would give fresh impetus to the economy.

An important detail that such analyses miss is the contrast between the two halves of 2016. The July 15 putsch and its aftermath aggravated all of Turkey’s risk factors, creating a climate much different from the first half of the year. This led to large outflows of foreign capital and negative assessments by credit rating agencies, which, in turn, caused the Turkish lira to fall much faster against the dollar than other currencies. All this resulted in a blow to economic production, as evidenced by the overall growth rates in the two halves of the year — 4.9% in the first and 1.1% in the second.

What is more, the new GDP data sets appear out of sync with other key economic indicators. The most glaring inconsistency is between the growth and unemployment data. With the jobless rate close to 11% on average in 2016, rising fast especially in the last quarter, a pronounced momentum in growth in the same period remains a mystery to many.

In a joint declaration, a group of renowned economists, including Korkut Boratav, Oktar Turel and Tuncer Bulutay, offered a scathing review of the new calculation method. In his column in BirGun daily, Boratav said TUIK had gone “well beyond” revision recommendations by the statistical agencies of the United Nations and the European Union. “With the stated aim of ‘improving statistics,’ the GDP’s level and growth trend after 2002 have been raised excessively, the shares of sectors have been changed significantly and the levels of investment and saving have been increased,” he wrote.

According to Boratav, TUIK had databases in line with international standards that covered production, business and turnover statistics in the industry and service sectors and that were complete with corresponding sets on employment, wages and salaries. The previous GDP calculations relied on those databases, he said.

In the new calculation method, however, the database has shifted to administrative and bureaucratic records by the Finance Ministry, especially the tax authority, the Interior Ministry and the Banking Regulation and Supervision Board, Boratav said. This means the principal data now comes from accounting records such as tax returns instead of production surveys. “Such records could be detached from real economic variables,” Boratav warned. “The concepts are different, resting on administrative and legal definitions rather than economic ones. Different rules, taxes and definitions would produce different results.”

In sum, Turkey’s new GDP data remains a subject of dispute, and the International Monetary Fund (IMF) has not yet started using it. As long as growth figures remain in conflict with key indicators such as unemployment, the question of credibility will linger on. How much the IMF and credit rating agencies will trust the new data is a curious topic to watch in the coming days.