The International Monetary Fund expects the Turkish economy to further slow down in 2017, but Ankara believes it can disprove the forecast. 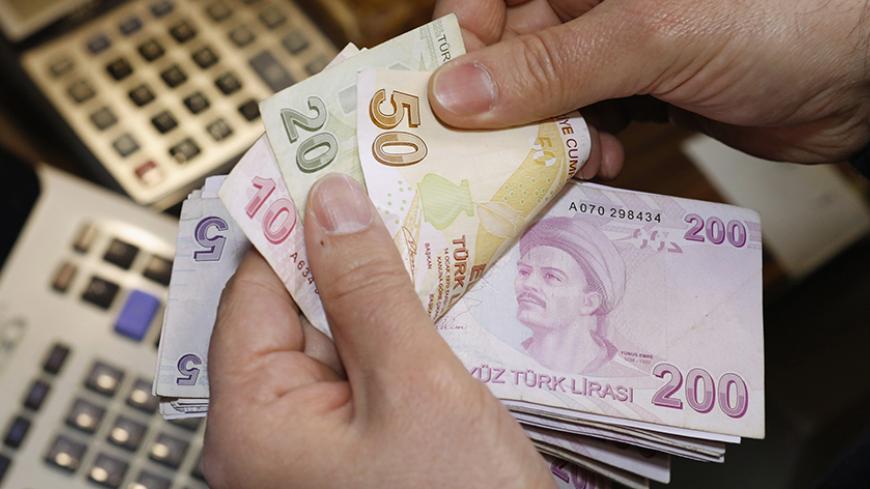 For Turkey, the most important aspect of the report was the IMF's approval of a new calculation method adopted last year by the Turkish Statistics Institute (TUIK) to determine gross domestic product. In a move that stirred much controversy, the TUIK revised figures retroactively so that the country’s 2015 GDP, for instance, increased 20%. The IMF, however, has downplayed the criticism that Turkish pundits have leveled against the move by employing the new GDP data, according to which the Turkish economy grew 6.1% in 2015 and 2.9% in 2016.

Yet the IMF projects that the Turkish economy will grow only 2.5% this year, well below the average 4.5% the IMF forecasts for the group of 153 emerging market and developing economies, which represent 85.5% of the world’s population and 58% of the gross world product.

In the group of emerging Eastern and Central European countries, Turkey stands out as the only country with deteriorating economic prospects. According to the report, Turkey’s outlook “is clouded by heightened political uncertainty, security concerns and the rising burden of foreign-exchange-denominated debt caused by the lira depreciation.”

According to the IMF, China’s robust growth rate will remain largely unchanged, and the other peripheral giant, India, will continue to grow as well. The forecasts for the two countries stand at 6.6% and 7.2%, respectively. Indonesia, another emerging Asian economy, is expected to grow more than 5%.

For other major emerging economies, however, the IMF is not that optimistic, projecting growth rates that make even Turkey’s 2.5% look quite refreshing. The Russian economy, for instance, is expected to emerge from recession and start growing again, but only by 1.4%. In Latin America, Mexico’s growth rate is projected to drop one percentage point to 1.7%, while the Brazilian economy is expected to grow by a mere 0.2% after contractions of about 4% in the past two years. For Argentina and Chile, the IMF forecasts stand at about 2%. Another important emerging economy — South Africa — is expected to post a very modest growth of 0.8%.

The IMF lists Turkey among emerging European economies, along with the countries that emerged from former Yugoslavia and the former socialist states of Eastern Europe. This group represents 2.4% of the world’s population and 3.5% of gross world product, 1 percentage point of which is contributed by Turkey alone. The IMF projects an average growth rate of 3% for this group in 2017, meaning that Turkey falls behind its regional peers as well.

The IMF’s not-so-pleasant forecasts for Turkey extend beyond growth to inflation, unemployment and the current account deficit. According to the report, Turkey’s consumer inflation is expected to stay in the double-digits and close the year at 10.1% before retreating slightly to 9.1% in 2018.

It is noteworthy that, while forecasting a lower growth rate, the IMF expects Turkey’s current account deficit to expand. The current account deficit is projected at no less than 4.7% of GDP for both 2017 and 2018, up from 3.8% last year. So how will the deficit grow by one percentage point while the GDP declines by about half a percentage point? The first thing that comes to mind here is the anticipation that Turkey’s energy bill will swell, along with an assumption that the crisis-hit tourism sector will fail to recover in 2017 and 2018.

Indeed, Turkey is doing little to decrease its hefty energy bill, the result of its reliance on oil and gas imports. When it comes to reviving tourism, positive developments toward domestic and regional peace are urgently needed, but instead Turkey’s international image is worsening by the day. Most recently, simmering allegations of foul play in the April 16 referendum, coupled with the decision of the Council of Europe’s Parliamentary Assembly to put Turkey on a watch list of countries flouting democratic norms, will hardly make the country more attractive in the eyes of the European tourists it is seeking to win back.

And what are Turkey’s own projections and targets on growth, inflation, unemployment and the current account deficit? The official reference here is the government’s medium-term economic program announced in October. Since then, however, the numbers in the program have become largely irrelevant because of the transition to a new set of GDP data. The GDP revisions required the government to update its economic targets, something it has failed to do so far.

According to the existing obsolete figures, Ankara’s growth target for 2017 is 4.4%, almost two points higher than the IMF’s forecast, and even higher for next year — 5%. The unemployment projection — 10.2% — is relatively more consistent with that of the IMF. The current account deficit is projected at 4.2% of GDP, half a percentage point lower than the IMF forecast. The inflation target, however, is rather divergent, standing at 6.5% as opposed to the 10.1% the IMF expects.

In sum, Ankara is more optimistic on growth, inflation and the current account deficit. Can it really disprove the IMF?

In reviewing the first four months of the year, a number of key facts need to be underlined. To manage the looming crisis and at the same time secure a “yes” from the referendum, the government followed a populist fiscal policy that resulted in a budget deficit of 20 billion Turkish lira ($5.6 billion) in the first quarter. The Central Bank of Turkey hiked rates by three points to stop the slump of the Turkish lira. Tailwinds then began to blow from abroad as the US Federal Reserve’s “dovish” approach on rate hikes led global short-term investments to park temporarily in emerging economies, including Turkey. This stopped the rise of the dollar against the lira. As a result, the economy has relatively perked up, signaling that a growth rate of at least 3% can be possible this year. Yet no signs of recovery are seen in inflation and unemployment.

How things wind up at the end of the year will depend on economic and political developments at home and abroad in the next eight months. The decisions and moves of short-term foreign investors will be especially crucial.