Turkey failed to attain most of its key economic targets last year, but was likely to receive a boost from falling oil prices in 2015. 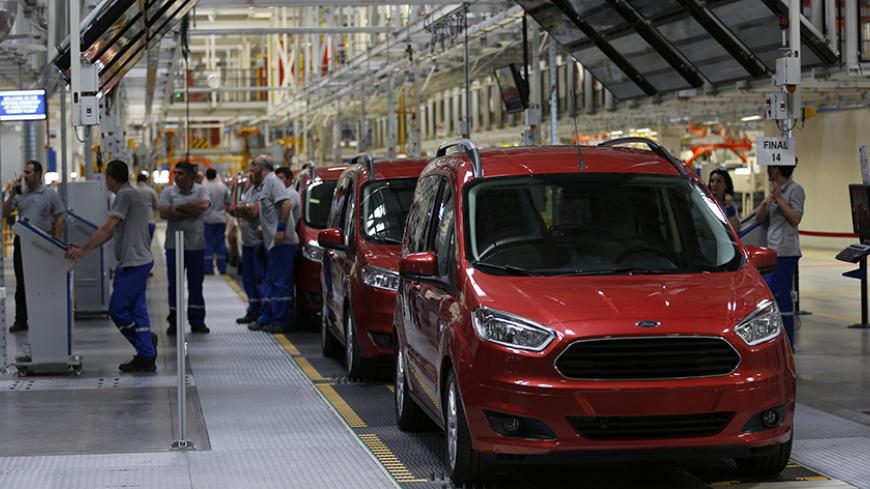 Turkey failed to achieve its main economic targets in 2014, barring a significant decrease in the current account deficit. This outcome had become obvious months ago, prompting the government to revise its middle-term economic program in October. The current account deficit narrowed more than expected, thanks to the fall in oil prices and the slowdown in economic growth, but most year-end indicators fell behind even the revised targets.

Let’s first see how the targets had been revised:

Unemployment: The unemployment rate stood at 10.4% in October, according to the latest figures revealed on Jan. 15. In remarks to Al-Monitor, however, economist Hursit Gunes estimated the actual jobless rate at about 18%, including the number of job seekers who have not applied for work in the past four weeks, which the official figures omit. Hence, the government has failed badly in combatting unemployment, given the 9.4% target at the beginning of 2014.

Current account deficit: In the most significant economic progress, the current account deficit fell to $47.1 billion in November, well below the original annual target of $55.5 billion and last year’s deficit of $65 billion. The year-end figure, which is yet to be announced, is projected to be 5.7% of the gross domestic product (GDP), beating the 6.4% target and well below last year’s 7.9%.

Yet, the size of the current account deficit remains unsustainable. It has to be brought down to about 4% to allow the economy to roll over without that much reliance on short-term foreign funds. The more than 50% slump in oil prices, the decreasing foreign trade deficit and the slowdown in economic growth have been influential in narrowing the current account deficit.

Finance Minister Mehmet Simsek has said that each $10 drop in oil prices narrows Turkey’s current account deficit by about $5 billion, adding that the deficit/GDP ratio could well decrease to less than 4% in 2015 if oil prices remain low.

Inflation: Consumer inflation, which saw the largest target revision during the year, reached 8.17% in 2014, less than the revised target of 9.4% but well above the original projection of 5.3%. The failure becomes even bigger, if the central bank’s own original target of 5% is taken into account.

Yet, the government is optimistic about 2015. Simsek said the falling oil prices alone will contribute to a 1.4-point decrease in inflation, if they remain below $65 this year.

National income: The $867-billion target in the middle-term program appears beyond reach. The Turkish lira’s depreciation against the dollar means that even the revised target of $810 billion could be missed.

National income per capita: The target at the beginning of 2014 stood at $11,277, while Economy Minister Nihat Zeybekci had even voiced optimism in June that this indicator would overperform to exceed $11,500. The target, however, was later revised to $10,537. In an email to Al-Monitor, Umut Oran, a lawmaker for the main opposition Republican People’s Party (CHP) who closely follows the economy, said he expected the revised target to be missed and that the year-end figure, which is yet to be announced, could even fall to less than $10,000.

Economic growth: During last month’s budget debate in parliament, Simsek conceded the government had failed in its growth target. He said the growth rate in the third quarter of 2014 was 1.7%, below the 2.2% projection, due to contraction in the agricultural sector, adding that the year-end figure, which is yet to be announced, would be close to the revised target of 3.3%.

The minister means the growth rate would be less than 3.3%. The overall 2.8% rate in the first three quarters is already an indication that the 3.3% target is difficult to attain.

In sum, the 2014 figures illustrate a major deviation from the targets. The government failed in many key areas such as inflation, growth, national income and exports. In 2015, however, the fall in oil prices is expected to have a downward effect also on natural gas prices and further alleviate Turkey, which is burdened with hefty energy spending.

The middle-term economic program was based on the projection that the average oil price would be $101.90. The prices have now fallen below $50. If the low trend continues, Turkey is likely to see significant improvement in an array of economic indicators, from the current account deficit to inflation, enjoying a good year after the bad one.

But Oran, the CHP lawmaker, has a different vantage point. “In their 2014 assessments and 2015 projections for Turkey, all reliable local and foreign observers focus on anticipations of stagnation and unemployment. Almost all of them highlight [the need for] stability and [investor] confidence,” he told Al-Monitor in an email. “In a Turkey that is fast drifting away from democracy and the rule of law as its political structure decays and social tensions increase, the reins of the economy have already slipped loose.”