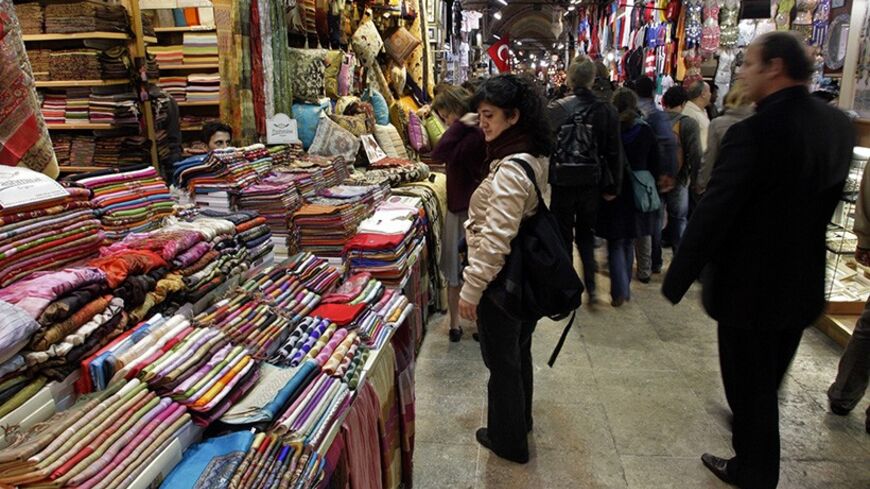 Turkey’s current account deficit, about $65 billion last year, is the ailing side of the country's economy. Ankara’s middle-term economic program projects the gap downward, to $55.5 billion, by the end of 2014. More optimistic projections see it narrowed even further, below $50 billion. Trying to reduce the gap without reducing dependence on foreign energy supplies would, however, require a complex effort.

A slowdown in growth can also help reduce the current account deficit. Ankara has set its growth target at 4%, but perhaps the International Monetary Fund's much lower projection of 2.3% will materialize. Can Turkey work an economic miracle and reduce its current account deficit by boosting exports to a record level while keeping the growth rate high through structural measures? One must first look at how things stand at the moment.

Turkey has the largest current account deficit among emerging economies. While Turkey’s current account deficit amounted to 7.8% of gross national product (GNP) at the end of 2013, the same ratio stood at 6.7% for South Africa, 4.3% for India, 3.9% for Chile, 3.5% for Brazil, 3.3% for Indonesia and 2.2% for Poland. The figure represents a great economic peril for Turkey and urgently needs to be reduced.

Deputy Prime Minister Ali Babacan, who oversees the economy, highlighted the issue at the Uludag Economy Summit on March 20, warning that 4-5% was a manageable level for Turkey and that anything beyond that posed a serious risk. In other words, Ankara acknowledges that the current account deficit has reached a dangerous level. How can the current account deficit-GNP ratio be reduced to the 4-5% level? What sort of miracle is required?

Optimism is high with regard to the European Union. As Babacan said at the Uludag summit, “Growth in the European Union this year is likely to reach plus 1% for the first time. This is important for us since the EU is our primary [trading] partner. EU recovery will help us increase exports. Our exports to the EU are already on the rise over the past two to three months.”

Babacan cautioned, however, that the private sector’s foreign debt was growing fast as it sought to finance the current account deficit. “We must now be cautious on the pace of that [debt] increase as our macro economy relies on the sustainability of the private sector’s foreign debt. Reducing the current account deficit should be the number one goal.”

The Central Bank has also focused on reducing the current account deficit through its short-term policies. Speaking at the Economic Outlook and Monetary Policy gathering in London in early April, Central Bank Governor Erdem Basci said exports are expected to support growth while private final domestic demand loses momentum in the coming period. “The current account deficit will improve substantially in 2014,” he contended.

Other measures aim to ensure short-term budget discipline and reduce the budget deficit. In addition, monetary policies and macroeconomic measures are also focused on reducing the current account deficit. They include control of loan volume, the redesign of sector loans, a ban on long-term installments for vehicle loans and credit card spending and efforts to boost domestic savings.

Naturally, these are all short-term measures. What needs to be done in the long term is to remove the main source of the problem. This means reducing dependence on foreign energy supplies and hence decreasing the import of energy products. Turkey hopes for progress in this area through investment in nuclear power plants. Russia is already building one at Akkuyu in Mersin province, with Japan tapped to build a second one at Sinop. According to Energy Minister Taner Yildiz, the two plants will cost $44 billion, but Turkey will pay “not even 100 liras” out of its own pocket. Ankara appears bent on going ahead with a third nuclear power plant, while greater focus on renewable energy is said to also be under consideration.

Hefty energy bill and dependence on Russia, Iran and Iraq

Turkey’s total imports amounted to $251,650,560,000 in 2013, including $55,915,234,000 worth of energy products, according to figures compiled by Anatolia news agency. The value of energy imports was down $4.2 billion from 2012. In the same period, crude oil imports fell by 925,000 tons. Yet, Turkey’s current account deficit ordeal will persist as long as it remains dependent on foreign energy supplies.

Turkey needs large amounts of natural gas both for heating and power generation. The overwhelming amount of its oil demand is also met through imports, with only minimal production at home. Last year, the country imported 18,554,000 tons of crude oil, which, Yildiz said, came largely from Iraq.

Turkey’s gas imports are procured via the state-run BOTAS, which pays the highest price to the closest supplier, Iran. Turkey pays $490 per 1,000 cubic meters to Iran, $425 to Russia and $335 to Azerbaijan.

BOTAS took Iran to international arbitration after it refused to offer a discount. The issue was also on the agenda of Prime Minister Recep Tayyip Erdogan when he visited Tehran in January. Iran is now expected to lower its price, either on its own accord or as a result of arbitration. Turkey’s irritation is amplified by an intriguing example: Iran sells 450 million cubic meters of natural gas per year to Armenia at prices that vary between $250 and $300, compared with Turkey's $490.

Iran justifies the high price on the grounds of a pricing formula in the 1996 gas agreement between the two countries. Turkey, however, is unwilling to continue to tolerate the terms of the 25-year deal. If the price were to go down to $440 as Turkey insists, the annual discount would amount to $400 million. Turkey imports an average of 8 billion cubic meters of Iranian gas each year, for which it pays about $4 billion.

Returning to the latest situation in the current account deficit, on April 11, the Central Bank announced that the deficit for February stood at $3.2 billion. Although that figure slightly exceeded the estimated $3 billion, the year-on-year deficit narrowed by some $2 billion. There is thus a downward trend. The $65 billion current account deficit at the end of 2013 decreased to $64.15 billion at the end of January and further to $62.25 billion at the end of February. The trend points to a fast-paced contraction.

If the trend continues, the year-end target of $55.5 billion set in the middle-term program will easily be achieved, which will mean that the current account deficit’s ratio to GNP will fall to 6.4%. The economy's management is optimistic that the target will be outperformed, and the deficit will fall below $50 billion. This would bring the current account deficit ratio to GNP below 6%.

In sum, Turkey’s current account deficit, which reached a record $75 billion in 2011 before falling to $48.9 billion in 2012 and surging back to $65 billion in 2013, remains on a downward trend so far this year, boosting the hopes of optimists. Given the ups and downs of the past four years, however, more time is needed to monitor developments and see what structural measures will be enacted before concluding that the downward trend is a steady one.