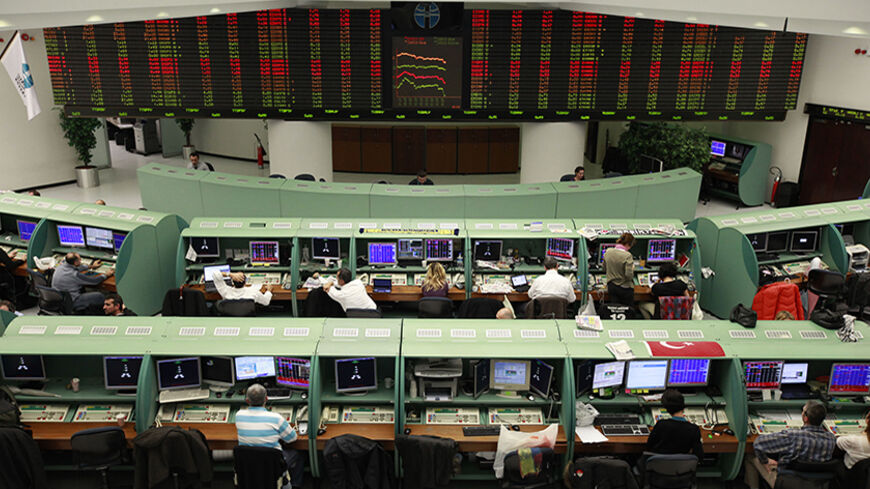 Traders work during the afternoon session at the Borsa Istanbul, Nov. 22, 2012. - REUTERS/Osman Orsal

The Turkish government has revised its year-end economic targets amid regional turmoil, rising inflation, a weakening currency and shrinking industrial output. The revisions were announced Oct. 8 as part of Ankara’s new medium-term program, its economic road map for 2015-17. The growth forecast was slashed to 3.3% from 4% for 2014, and to 4% from 5% for 2015.

Efforts to rein in inflation have proven a huge disappointment. Accordingly, the year-end estimate was raised to 9.4% from the earlier 5.3% projection, a level Turkey could now hope to achieve only in 2016, if everything goes as planned.

Deputy Prime Minister Ali Babacan, who is in charge of the economy, pledged the required structural reforms, a key issue for foreign investors, will be sped up in a bid to prop up growth.

Turkey’s main economic targets for the next three years, announced at a news conference attended by Babacan and five other ministers, were as follows:

Turkey’s most remarkable achievement this year has been the reduction of the current account deficit, which is expected to fall to 5.7% of GDP by the end of the year. The deficit stood at 7.8% of GDP ($65 billion) in 2013, well above the deficits of other emerging economies such as India, Brazil, South Africa, Chile and Indonesia.

In the previous medium-term program, the current account deficit for 2014 was projected at $55.5 billion. The revised projection has put the figure further down, at about $46 billion. But despite the progress, the decrease is not quite healthy. The rise in exports has had a positive effect in reducing the deficit, but one should keep in mind that slowing growth is another factor that narrows the gap. The economy would have gained more if the decrease in the current account deficit had been accompanied with strong growth, driven by structural reforms.

In sum, all of Turkey’s economic targets except for the current account deficit have been revised downward in the new, medium-term program. It remains to be seen whether the lower targets will be achieved.