Following revelations that the Turkish government has profiled the entire population, the main opposition responds by “profiling” alarming poverty among the masses. 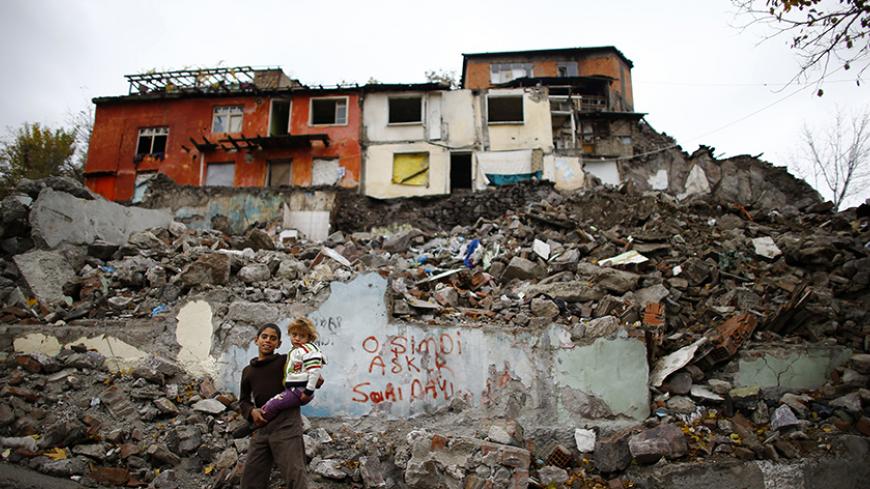 A Syrian refugee boy pauses as he carries his sister to their house in Hacibayram district of Ankara, Nov. 21, 2014. - REUTERS/Umit Bektas

Ahead of every election in Turkey, political parties make myriad promises to the jobless and the poor, pledging social benefits for low-income families and retirees and housing projects for the homeless. The promises are typically forgotten after a government is formed and then everything goes about as usual. Ahead of the June 7 parliamentary elections, however, two issues appear bound to persist and keep fueling debate:

The revelation that police have secretly profiled all Turkish citizens was made by CHP leader Kemal Kilicdaroglu during a party meeting in parliament March 17. Kilicdaroglu based his claim on a document penned by the intelligence department of the directorate-general of police, which he showed at the meeting. According to the CHP chairman, two data analysis programs, called Deva 1 and Deva 2, were used to collect information, with their databases now containing personal details about every person in the country. “Since we are politicians, I can see why we are being profiled. But why are you profiling taxi drivers, for God’s sake?” Kilicdaroglu said in his speech, addressing Prime Minister Ahmet Davutoglu.

The CHP, for its part, made an alternative “profiling” of the population that drew up Turkey’s poverty map. The report, penned by a team led by CHP parliament member Umut Oran, detailed the economic woes of the impoverished masses and urged the government to struggle against poverty instead of busying itself with profiling.

The report, which Oran made available to Al-Monitor, is based on current data by the Turkish Statistics Institute (TUIK), which represent the state’s official figures that the government cannot dispute or deny. According to the report, 22 million Turks have an average monthly income of only 835 Turkish lira ($320), and 49 million are struggling with debt. It says 34 million cannot afford meat, chicken or fish once every two days, 56.2 million lack the means to renew worn-out furniture and 26 million are unable to buy new clothes. A one-week vacation per year is beyond the means of 58 million people.

While even the window glass of the new presidential palace was imported from abroad, 30.5 million Turks live in homes with leaking roofs, moisture-prone walls or decayed window frames. About 19 million people, or one in every four citizens, reside in dark homes deprived of sunlight. Accommodations without a bathroom, a toilet or a kitchen are home, respectively, to 2 million, 6.6 million and 2.1 million people. Another 12.1 million live in homes that lack warm water and 1.3 million in homes that lack water altogether. The report indicates that 22 million shiver during winter, unable to afford heating.

The report drew attention also to workplace accidents, which have been on the rise in Turkey, affecting mostly workers in low-paid, manual jobs. In 2014 alone, 1,886 people were killed in workplace accidents caused either by state or employer negligence, with the death toll standing at 206 in the first two months of 2015, the report said.

It charged the government had become a “Big Brother” electronically storing the personal details of 77 million citizens, but had no qualms about rampant poverty. “Ironically, the government is intent on monitoring and controlling the most intimate aspects of its people’s lives, but hardly shows any concern and care for their living conditions, of which it is fully aware,” the report said. “Rather than striving to resolve grave issues such as unemployment, poverty, livelihood and workplace accidents, the government is trying to put up smokescreen and cover them up.”

With respect to unemployment, the report said, “Over the past 12 years, the AKP [Justice and Development Party] has failed to resolve problems of employment and livelihood. TUIK’s monthly unemployment data reflect only the tip of the iceberg. According to official definitions, 3,145,000 people are jobless and the unemployment rate is 10.9%. This is the highest rate in the past four years. Unemployment among young people, meanwhile, has hit 20.2%. These figures, however, comprise only those who are actively looking for jobs. An additional 2,418,000 ‘hopeless’ people have not looked for a job in the past three months but are ready to work if they find one. With this figure added, the real number of jobless swells to 5,563,000, which is higher than the population of some countries.”

In remarks to Al-Monitor, Oran argued the AKP government was not interested in combating poverty because it was using it as a political tool. “Turkey’s poverty problem cannot be resolved as long as the AKP is there. The government exploits poverty and follows policies aimed at perpetuating the people’s plight. The social welfare benefits provided in Turkey amount to only half of those in [other] OECD countries, but the government has come to publicize even this as a great achievement,” Oran said. “In the absence of a strong independent media, the AKP has so far succeeded in managing perceptions but it can no longer sustain it because the situation has reached an intolerable point. TUIK itself can no longer cover up those alarming figures exposing the plight of the masses. Turkey urgently needs a social-democrat government to resolve the problem of poverty.”

And what difference a social-democrat government can make? “If the CHP comes to power, it will focus on alleviating poverty,” said Oran, who is also the vice president of the Socialist International. “As a first step, we’ll pay two bonus pensions per year to 9.5 million retirees. The first bonus will be paid 40 days after the elections and the second on Sept. 24.”

The CHP pledge of two bonus pensions has sparked heated exchanges between the main opposition and the ruling party. The government has challenged the CHP to explain how it would finance the project, while Kilicdaroglu has signed a notarized document vowing to step down if he failed to deliver his promises.

Asked about how the retiree bonuses would be financed, Oran offered the following explanation: “They have no ground to claim a funding shortage. We know where the problems lie and how much resources the country has. This government has just burdened the people with an additional 90 billion Turkish lira ($34.4 billion) in external debt only with the controversy it sparked over interest rates, which led to an over-appreciation of the dollar. It has basically squandered this money. We’ll detail our plans in our election platform, due to be announced April 11. Everybody will see that all our projects to stamp out poverty are rational, reasonable and doable.”