A number of big companies that would have normally gone bust amid Turkey’s economic turmoil are surviving thanks to government favors. 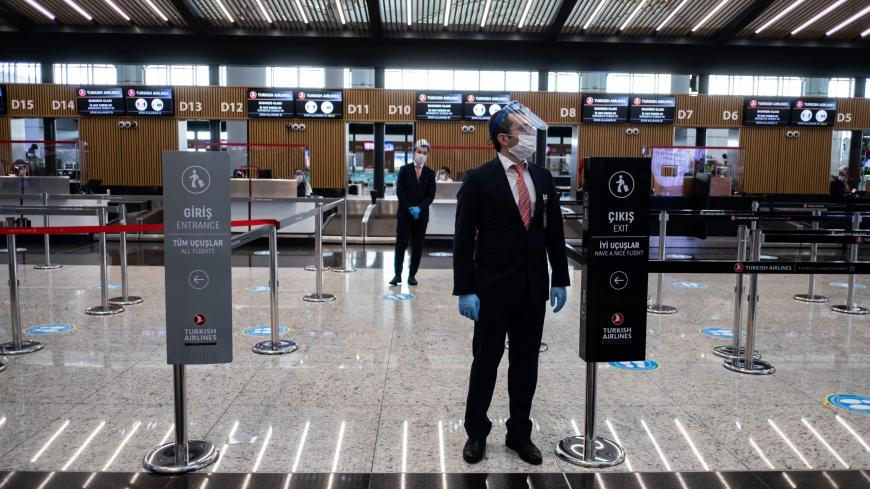 Employees wearing face masks wait to serve passengers at the Istanbul Airport on the first day of the resumption of domestic flights, which were halted in late March due to the spread of the novel coronavirus, June 1, 2020. Companies that built the airport are bleeding money, in part due to COVID-19, and are being kept on their feet by the government. - YASIN AKGUL/AFP via Getty Images)

Poor gradings from international credit rating agencies such as Moody’s and Fitch have relegated the Turkish economy to the underdeveloped league as Ankara grapples with long-running economic woes, exacerbated by the COVID-19 pandemic. The government attempted to warm the economy in June and July, but the risky policy quickly backfired. The fresh nosedive of the Turkish lira, coupled with unruly inflation and a high, ossifying unemployment rate, has raised the specter of a lengthy stagnation. Remarkably, however, bankruptcies among big companies have yet to be seen as those sinking are somehow kept afloat, very much like the “living dead.”

Many of those “zombie” companies, which would have normally gone bust, are continuing to exist thanks to President Recep Tayyip Erdogan’s government. Among them are construction heavyweights known to be close to the president and have thrived under his rule.

According to World Bank data, Turkish companies such as Limak, Cengiz, Kalyon, Mapa and Kolin top the global list of contractors with the most public-private partnership (PPP) projects in the 1990-2019 period. In no other country have PPP projects been concentrated in the hands of such a small coterie of companies.

Their heyday, however, is gone; the companies have been battered by the economic turmoil that hit Turkey in 2018 and that deepened further with the pandemic. Saddled with the debt of foreign loans they lavishly used, the companies have come to the brink of collapse. The most ambitious of their so-called “megaprojects” — Istanbul’s new giant airport — has seen a 83% decline in passenger traffic only a year after its inauguration. The government, however, is trying to keep them afloat by awarding them fresh tenders.

Nonperforming corporate and consumer loans stood at 151 billion liras (some $20 billion) in Turkey at the end of August, accounting for 4.3% of the total. The rate had reached up to 5.7% last year. The decrease in bad loans despite the pandemic-hit second quarter, in which the economy contracted nearly 10%, owes to government relief measures, as part of which the bad loan classification period was doubled to 180 days overdue. Had it stayed at 90 days, the rate of nonperforming loans could have hit 10%. In a sense, many sinking companies are being kept on their feet as if alive — hence, the “zombie” metaphor.

Many indebted companies were already on the ropes before the pandemic because of the slump of the Turkish lira, which has meant a drastic increase in foreign-exchange prices — the key trigger of Turkey’s economic turmoil since 2018. Standing out among them are companies to which Ankara awarded “megaprojects,” including motorways, bridges, tunnels, hospitals and power plants. The companies used significant foreign loans for the projects, which were based on the PPP model. According to treasury data, the government has offered guarantees to $17.2 billion in loans in seven such projects. The burden of the debt, however, has grown dramatically because of the depreciation of the lira, which has lost more than 20% of its value this year alone. A dollar was worth 3 to 4 liras at the time the loans were acquired; now the price of the greenback is over 7.5 liras.

The pandemic’s devastating impact on travel dealt a further blow to the contractors. The airports, toll motorways and bridges they built rested on the assumption of annual economic growth of 5% and thus busy air and land traffic. Though the companies enjoy turnover guarantees from the government, such earnings are not enough to meet their liabilities.

According to data from the presidency’s budget department, the worth of contracts in the PPP category totals $156 billion. Airport projects represent $73 billion, with the contract for the Istanbul Airport alone worth $35 billion. The project to build and operate the airport was awarded to Kalyon, Limak, Cengiz, Mapa and Kolin, which has since handed its shares to Kalyon. The five companies dominate the PPP projects, with the worth of their contracts amounting to more than a half of the total. They have received significant shares also from the privatization of power distribution networks and do business with the government in various other sectors.

Ronesans Holding, which built a sprawling new palace for Erdogan in 2014, has emerged as one more favorite of the government, especially in the so-called “city hospital” projects — giant medical complexes, which the government uses in return for hefty rent and services payments.

The financial troubles of those companies have put major strains on the banking sector, especially public lenders. Business circles are often abuzz with talk of how public banks help the companies out at the behest of the government.

Meanwhile, 11 city hospitals, five of which are operated by Ronesans, have received 5.2 billion liras ($685 million) in rent and services payments from the Health Ministry in the first eight months of the year. Along with other medical facilities such as physiotherapy clinics and judicial psychiatric hospitals, Ronesans’ operations have reached a total capacity of 9,500 beds. Earlier this year, it was awarded a project to build a 1,000-bed hospital on the land of the now disused Ataturk Airport in Istanbul.

The public funds mobilized to keep the “zombie” companies up contribute to Ankara’s growing budget deficit and public debt. Persisting favoritism in times of the pandemic is bound to only fuel frustration among a populace struggling for adequate education and health care services.