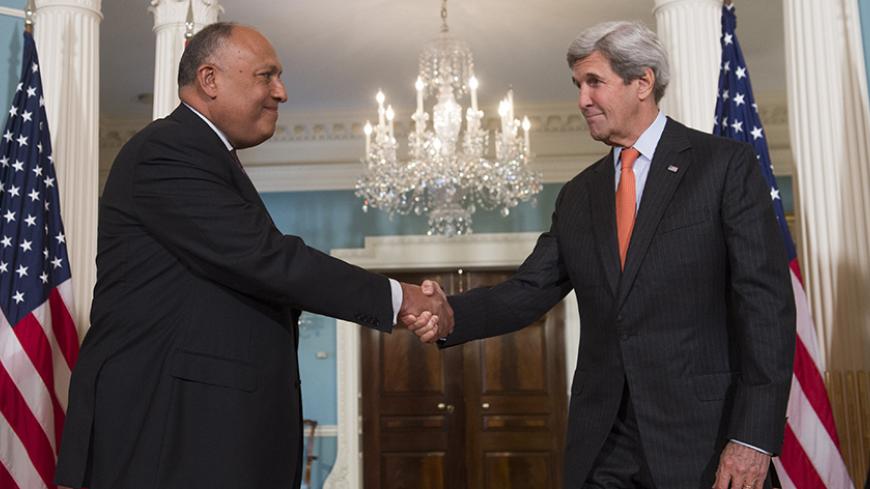 Washington would like to formally register its disapproval of Cairo’s authoritarian backsliding, and now can we please get back to business as usual.

Despite a chorus of criticism from human rights groups, the Obama administration is showing no interest in paring back a $1.3 billion-a-year military aid package that forms the crux of the bilateral relationship. The State Department’s request for fiscal year 2017 seeks the full amount, and the two countries late last year resumed joint production of M1A1 main battle tanks following the program’s suspension after the military overthrew President Mohammed Morsi in 2013.

Even so, the State Department has remained publicly critical of Egypt’s record under President Abdel Fattah al-Sisi, denouncing a pattern of excessive use of force including “unlawful killings and torture” and mass arrests of political opponents in its latest annual human rights report. US Secretary of State John Kerry, a strong Sisi backer, also put the president on notice that repression will only fuel more terrorism during a bilateral strategic dialogue in Cairo last August.

“The return of authoritarian rule that began with the military’s July 2013 takeover has left US policymakers in a quandary,” the Congressional Research Service summarized in a Feb. 25 report to lawmakers and their staffs. “President Obama and members of his administration continue to express the view that authoritarian governance and the denial of basic human and political rights create conditions conducive to the growth of violent extremism. On the other hand, maintaining a partnership with the government of Egypt is still viewed as important for goals of regional stability and security.”

Congress has been equally schizophrenic.

Sharp differences remain between the House and the Senate — and within the House itself — among those who see Sisi as a useful, if autocratic, counterterrorism partner, and those who are appalled by his human rights record. However, neither chamber is questioning the $1.3 billion military package, which dates back to Egypt’s 1979 peace treaty with Israel.

That seems to suit Cairo just fine. Sisi has made no mystery of putting a premium on the bilateral military relationship as he pursues Islamists in the Sinai Peninsula while signing on to the global anti-Islamic State coalition.

The message has trickled down to Cairo’s multimillion-dollar operation in Washington, led by the Glover Park Group. The most recent lobbying disclosure from the firm, which was founded by four former Democratic officials who worked for former President Bill Clinton and former Vice President Al Gore, shows that “military-to-military relations” dominated almost every conversation with officials during the second half of 2015.

Egypt also benefits from Sisi's popularity with key players in the region, notably Saudi Arabia and the United Arab Emirates, both of which have well-funded lobbying operations in Washington. The pro-Israel lobby has also fought proposed cuts to Egyptian aid in the past.

Lawmakers got the same message when visiting Cairo.

House Speaker Paul Ryan, R-Wis., returned from a visit in April vowing to keep the military aid flowing lest Egypt become a failed state. Senate foreign aid Appropriations Chairman Lindsey Graham, R-S.C., came back around the same time, determined to craft a massive economic "Marshall Plan" for the country and the surrounding region.

Despite that pledge, the purse-string holders in the Senate have taken a dimmer view than their House counterparts in the draft appropriations bills released this summer.

Senate appropriators recommend keeping in place a 15% withholding on military aid absent progress on human rights, such as the investigation and prosecution of “extrajudicial killings and forced disappearances,” to include the “torture and murder” of Italian doctoral student Giulio Regeni. The Senate bill would also cut the State Department’s economic aid proposal for the upcoming fiscal year in half, to $75 million, while making clear that even that money can be reprogrammed for more deserving countries if Cairo is seen as “prohibiting or otherwise interfering with” US programs funded by those funds.

The Senate foreign aid Appropriations panel declared itself “dismayed that many NGOs remain unregistered and are prevented from working in Egypt for the benefit of the Egyptian people,” according to the report accompanying its FY 2017 spending proposal. The report quotes the State Department as saying that $1 billion in past years’ economic funding remains unspent because of obstacles raised by Cairo.

Many of the recent revelations on the difficulties US officials and their nonprofit partners are encountering on the ground originated with the House Foreign Affairs Committee. Middle East and North Africa panel Chairwoman Ileana Ros-Lehtinen, R-Fla., and Rep. Gerry Connolly, D-Va., helped bring to light not only the economic funding pipeline blockage but also key deficiencies in the State Department’s and the Defense Departments’ ability to track that military gear is used for the right purpose.

A blistering government watchdog report earlier this year “shows an alarming and unacceptable amount of deficiencies in our end-use monitoring and human rights vetting programs in Egypt," Ros-Lehtinen said in a statement at the time.

Other committees have been more willing to look the other way.

The House panel on foreign aid in its FY 2017 proposal authorizes the full $150 million in economic assistance sought by the State Department. The panel also seeks to remove the existing 15% military aid withholding — a provision Kerry has waived in the past. And rather than find fault with Cairo, the spending bill’s accompanying report slams the Obama administration for seeking to terminate Egypt’s eligibility for a preferential practice known as cash-flow financing.

The House Judiciary panel also gave Cairo a boost this February when it passed legislation requesting that Kerry label Sisi's Muslim Brotherhood foes as terrorists. The bill, from Florida Republican Mario Diaz-Balart — also a key Egypt ally on the foreign aid panel — has gone nowhere since then, however, indicating a reluctance on the part of Republican leadership to disregard the State Department's warnings that painting political Islamists with a broad brush could backfire.