Lobbying 2015: Egypt lobbies itself back into America's good graces

Congress and the State Department are willing to overlook ongoing human rights abuses in Egypt as Abdel Fatah al-Sisi takes on the Islamic State and keeps the peace with Israel. 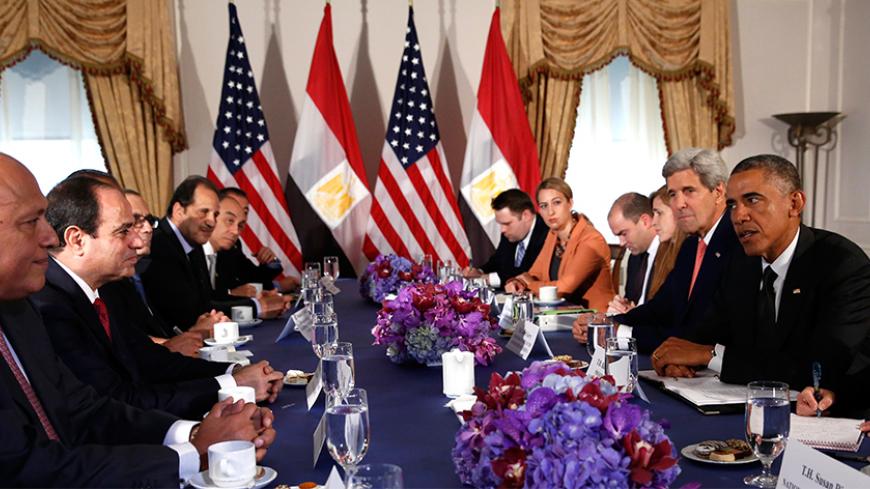 Egypt is back in America’s good graces despite deposing its first democratically elected leader and putting him on death row.

President Barack Obama personally delivered the news in a March 31 phone call with his counterpart from Cairo, Abdel Fattah al-Sisi. The US president’s decision to lift the last remaining holds on $1.3 billion in annual military aid in spite of increasing authoritarianism offers the clearest sign yet that security considerations are paramount.

Congress has also got Sisi’s back.

After imposing stringent human rights conditions and denying the administration a waiver for the first time in last year’s spending package, lawmakers reversed course in the current appropriations law. That’s the authority Obama used to release the jets and tanks that Sisi says he needs to battle Islamist militants in the Sinai Peninsula and defend Egypt’s western border with lawless Libya.

The changes have been pushed behind the scenes by a $3 million-a-year lobbying campaign from the Glover Park Group, a lobbying firm formed by four former Democratic officials who worked for President Bill Clinton and Vice President Al Gore. Egypt’s new rulers turned to the firm to replace the trio of firms — the Podesta, Livingston and Moffett groups — that had long served former Egyptian President Hosni Mubarak.

Egypt has also gotten an assist from the pro-Israel lobby American Israel Public Affairs Committee and the Saudi Embassy in Washington, which much prefer Sisi over his Muslim Brotherhood predecessor, Mohammed Morsi. Meanwhile, human rights groups and some foreign policy experts are urging a complete re-evaluation of America’s support for the Egyptian military.

The proposed House and Senate foreign aid bills both authorize the State Department to spend $1.3 billion in military aid and $150 million for economic assistance, in line with the State Department’s fiscal year 2016 budget request. While military assistance has held steady since the 1979 peace treaty with Israel, nonmilitary aid has dwindled in recent years, from $415 million in FY 2008 to $250 million in FY 2009-14 and down to current levels.

House lawmakers are now willing to go one better with a proposed foreign aid bill that would eliminate the last remaining restrictions. The certification requirements have proved embarrassing for both governments.

“The overall trajectory of rights and democracy has been negative,” the State Department wrote in a May 12 memo to Congress justifying its failure to certify Egypt’s progress. The memo, first obtained by Al-Monitor, bemoans a “pervasive lack of respect for international due process standards and other fair trial safeguards.”

The chairwoman of the House foreign aid spending panel, Rep. Kay Granger, R-Texas, has emerged as a key ally: Glover Park reported no fewer than eight calls and emails to her staff in the six months to Jan. 31. Democracy activists are keen to point out that F-16 fighter jets, which were held up until this year, are manufactured in her Fort Worth district.

The House, in general, has been more forgiving of the Sisi government’s crackdown on dissent, going so far as to launch a Congressional Egypt Caucus last summer. It is currently led by Reps. Dana Rohrabacher, R-Calif., and Loretta Sanchez, D-Calif.

The Senate, however, has refused to play ball. Its proposed foreign aid spending bill for FY 2016 actually reinforces democracy provisions by requiring that Egypt notably take steps to protect freedom of expression and release “all political prisoners” before a portion of military assistance can be released.

The two chambers are also divided over whether to continue docking economic assistance for the costs associated with the arrest and trial of 43 nongovernmental organization workers — including 16 Americans — in 2011-13.

The Senate bill, unlike the House version, would continue the FY 2015 policy of withholding the “equivalent to that expended by the [US] Government for bail, and by nongovernmental organizations for legal and court fees associated with democracy-related trials” until Egypt dismisses the convictions. The bill’s author, State and Foreign Operations panel Chairman Lindsey Graham, R-S.C., introduced legislation last year denouncing the charges as “politically motivated and invalid.”

Rather than a blank check, the president laid out four categories for future aid to Egypt: counterterrorism, border security, Sinai security and maritime security, as well as “sustainment of weapons systems already in Egypt’s arsenal.” And he announced that the United States would do away starting in FY 2018 with the cash flow financing mechanism that has allowed Egypt to pay for US defense equipment in partial installments over time rather than all at once since 1979.

“Traditionally,” the Congressional Research Service points out in its analysis of the decision, “the President has authorized CFF [cash flow financing] to select countries in order to demonstrate strong U.S. support for their continued security.”

The administration also hasn’t been shy about criticizing Egypt for working with the United Arab Emirates in bombing runs against Islamists in neighboring Libya. The US government publicly favors a negotiated settlement between the internationally recognized government in the east and the Islamist forces in Tripoli.