The Senate’s spending bill keeps human rights restrictions in place despite resistance from the House. 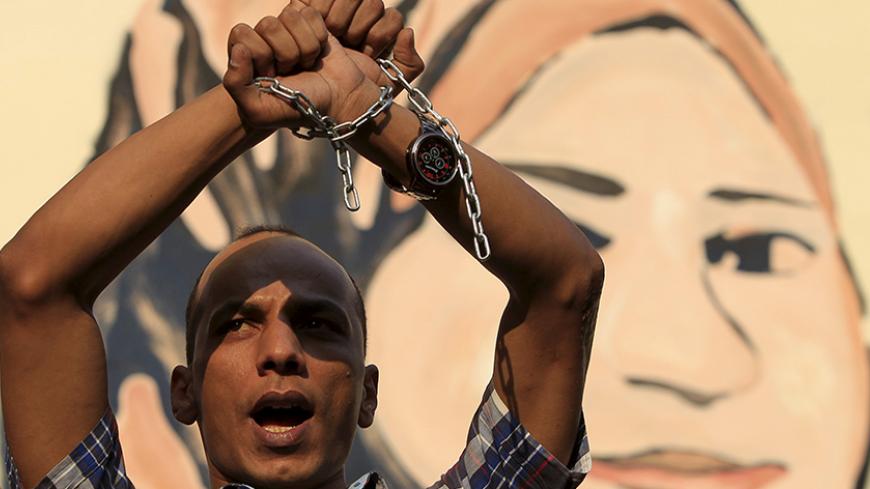 A protester holds up his hands, which are chained together, as journalists and members of the April 6 movement protest against the restriction of press freedom and demand the release of detained journalists in front of the Press Syndicate in Cairo, June 10, 201 - REUTERS/Mohamed Abd El Ghany

The US Senate wants to keep in place restrictions on military aid to Egypt, setting up a clash with Cairo’s backers in the House.

The Senate foreign aid bill would require Secretary of State John Kerry to certify Egypt’s progress on several human rights and democracy metrics before releasing $1.3 billion in annual military aid, a provision that is missing from the House bill. The Senate bill, unlike the House version, also continues to withhold part of the yearly $150,000 in economic assistance to Egypt in order to pay for the legal bills of workers of nongovernmental organizations sentenced in connection with US-backed efforts to promote democracy in the country.

“While the Committee shares the Government of Egypt’s assessments regarding the threats posed by Islamic extremists in neighboring countries and the Sinai, the Committee remains concerned with the status of democracy, human rights, and the rule of law in Egypt,” says the nonbinding report that accompanies the foreign aid bill. “The Committee appreciates efforts by the Departments of State and Defense to update bilateral relations with Egypt, and expects that respect for human rights and the rule of law remain part of the strategic dialogue.”

The foreign aid bill for the fiscal year that starts Oct. 1 cleared the Appropriations Committee on July 9 and was posted online July 13. The House panel passed its version of the FY 2016 bill last month.

Congress has gradually been lifting restrictions put in place after the Egyptian military ousted the country’s first democratically elected president, Mohammed Morsi, in 2013. US support for his anti-Muslim Brotherhood successor, Abdel Fattah al-Sisi, has been a priority for the pro-Israel American Israel Public Affairs Committee lobby.

Both chambers agreed in December’s spending compromise to give Kerry the power to waive certification of Egypt’s progress on human rights if those standards can’t be met and keeping the aid flowing is deemed to be in America’s national security interest. The new House bill would do away with that certification, while the Senate keeps it in place — along with a requirement that the State Department, as a condition for using its waiver authority, explain in detail how Egypt is failing to meet congressional standards.

The House and Senate are also divided over whether to continue docking economic assistance for the costs associated with the arrest and trial of 43 nongovernmental organization workers — including 16 Americans — in 2011-13. The Americans were freed after the US Agency for International Development paid $4.6 million in bail money in 2012, while the Egyptian workers are serving suspended sentences save for a handful who have fled to Jordan and the United States.

The Senate bill would continue the FY 2015 policy of withholding the “equivalent to that expended by the [US] Government for bail, and by nongovernmental organizations for legal and court fees associated with democracy-related trials” until Egypt dismisses the convictions. The bill’s author, State and Foreign Operations panel Chairman Lindsey Graham, R-S.C., introduced legislation last year denouncing the charges as “politically motivated and invalid.”

The House bill, however, does not mention the withholding, to the dismay of some democracy activists.

The policy is “small and symbolic, but I think important because 43 people’s lives were disrupted for the crime of helping Egypt develop its civil society,” said Leslie Campbell, the director of Middle East and North Africa programs at the National Democratic Institute, which saw several of its workers arrested. “I would find it quite disappointing if there was no recognition of … what happened.”

by Murielle KASPRZAK and Joseph SCHMID | AFP | May 26, 2022
END_OF_DOCUMENT_TOKEN_TO_BE_REPLACED