A look at the Middle East issues Congress will be addressing the week of May 26. 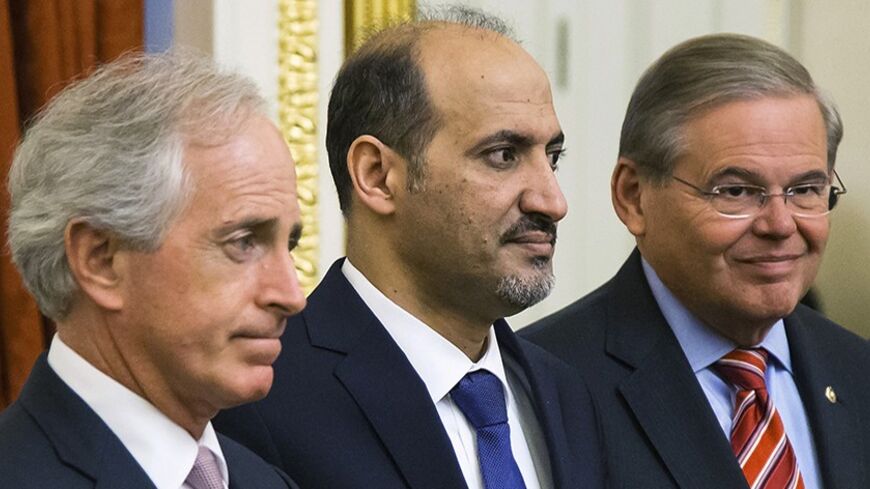 The Syrian opposition's recent lobbying blitz on Capitol Hill is beginning to pay off, with the Senate's defense bill recognizing the Western-backed rebels as a US ally in the war on terror.

The National Defense Authorization Act (NDAA) "authorizes the Secretary of Defense to provide equipment, training, supplies, and defense services to assist vetted members of the Syrian opposition," according to a summary of the bill released May 23.

The language is included in a section of the summary that touts the bill's potential to enhance "the capability of the U.S. armed forces and the security forces of allied and friendly nations to defeat al Qaeda, its affiliates and other violent extremist organizations" — a symbolic victory for the beleaguered opposition.

"This is a momentous occasion," Syrian National Coalition (SNC) adviser Oubai Shahbandar told Al-Monitor. "This is the first stop in clearly defining the convergence of American national security interests with strengthening the Free Syrian Army [FSA], which is actively fighting al-Qaeda and actively fighting Iranian-backed international terrorist forces in Syria."

The type of aid authorized by the bill remains unclear. The Senate Armed Services Committee cleared the bill on a 25-1 vote on May 22, but it is not due to be made public until next week, possibly as early as May 27.

A motion to strike the bill's "provision regarding assistance to foster a negotiated settlement to the conflict in Syria" was defeated by a 23-3 vote during the closed-door mark up. Only Sens. Joe Manchin, D-W.Va., Mike Lee, R-Utah, and Ted Cruz, R-Texas, voted for the motion.

"We have a provision in the bill which authorizes — key word authorizes — the Department of Defense to train and equip carefully vetted elements of the Syrian opposition so that they can protect the Syrian people from the kind of horrific attacks that we've seen from the Assad regime," Chairman Carl Levin, D-Mich., told reporters on May 22. "And there is also included certain kinds of equipment — an authorization for certain kinds of equipment, as well as training."

Levin went on to say that the bill "specifies" the types of equipment that would be authorized, but appeared to backtrack after being corrected by an aide. The chairman has long called for greater US involvement, supporting both a no-fly zone and limited US intervention, as well as arming vetted rebels with anti-tank and other weapons.

The Syrian opposition made clear its preference for anti-aircraft weapons during a Washington visit earlier this month by Syrian opposition leaders, including SNC President Ahmad Jarba and Brig. Gen. Abdul-Ilah al-Bashir, the new chief of staff of the FSA's Supreme Military Command. The Barack Obama administration, however, continues to balk at providing the weapons, out of fear they could end up in the hands of Islamist extremists and be used against US targets.

The NDAA language follows intense public and behind-the-scenes lobbying by the Syrian opposition. In meetings with Levin, ranking member James Inhofe, R-Okla., and other members of the Senate Armed Services Committee — as well as key staffers — the opposition has repeatedly made the pitch that the Western-backed rebels can be trusted to keep track of US weapons, fight both Bashar al-Assad's regime and Islamist militants, and put in place functioning, inclusive governing alternatives in "liberated" areas — as long as they have the weapons to keep Assad's air force out.

The House bill, for its part, makes no mention of aid to the opposition. And the accompanying, nonbinding committee report shows the House members to be less sanguine about involvement in the 3-year-old conflict than their Senate counterparts.

"The committee reserves judgment on any plan to train and equip select elements of the Syrian opposition until it understands the details of such plan or proposed authority, including how it fits into a broader strategy and policy," the report states. "However, the committee does believe that such an effort merits prudent planning and consideration in order to understand how it would help bring about an end to the Syrian civil war, the civilian strife caused by the war, and the threat of international terrorism posed by some of the participants in that war."

Other than discussions about the dueling defense bills, little Middle East-related action is expected on Capitol Hill next week.

The Senate is out for a week-long recess, while the House returns May 28, after a two-day Memorial Day break.

Senate Armed Services member and Tea Party favorite Cruz will reportedly use the recess to travel to Israel and Ukraine as the lone member of a delegation put together by the conservative group Secure America Now. Cruz has been burnishing his hawkish foreign policy credentials ahead of a possible presidential run in 2016 and called on John Kerry to resign last month after the secretary of state warned that Israel risked becoming an "apartheid" state if it couldn't make peace with the Palestinians.

Sens. Rob Portman, R-Ohio, and Ben Cardin, D-Md., are also traveling to Ukraine, where they'll monitor this weekend's presidential elections as part of a team from the Helsinki Commission and the Organization for Security and Cooperation in Europe.

In the House, the Appropriations subcommittee on Homeland Security marks up its annual spending bill on May 28. The text of the bill has not yet been released.

And on May 29, the Foreign Affairs Committee marks up North Korea sanctions legislation from Chairman Ed Royce, R-Calif., that also takes aim at Iran.

"The Government of North Korea," the bill states, "has recently and repeatedly sponsored acts of international terrorism, including attempts to assassinate defectors and human rights activists; repeated threats of violence against foreign persons, leaders, newspapers, and cities; and the shipment of weapons to Hezbollah and Hamas via Iran."