A look at the Middle East issues Congress will be addressing the week of May 5. 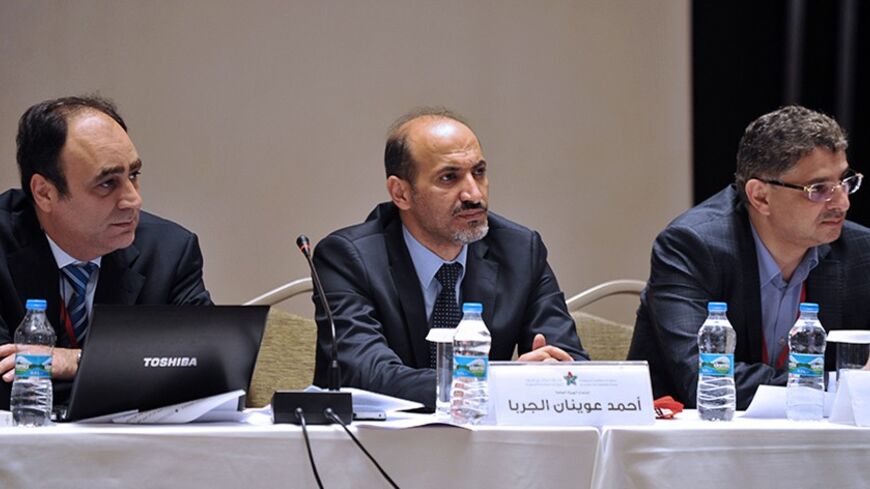 The Western-backed Syrian opposition will blanket Capitol Hill next week, with no fewer than four top officials making their case for the United States to step up its involvement by providing anti-tank and anti-aircraft weapons.

The president of the National Coalition for Syrian Revolutionary and Opposition Forces — Syria's main opposition umbrella group — will be visiting with top lawmakers of both parties Wednesday through Friday.

He is expected to be accompanied by his chief of staff, the new head of the Supreme Military Command and the opposition's top diplomatic adviser.

“It's a message of unity we're bringing to policymakers,” a Washington-based adviser to the coalition told Al-Monitor.

Ahmad Jarba, president of the coalition, is expected to meet with national security adviser Susan Rice and other top administration officials, the source said.

On Capitol Hill, meetings have been lined up with the House leadership, leaders of the House and Senate foreign relations and armed services panels, as well as with Sen. John McCain, R-Ariz, a longtime advocate for arming the rebels, and Sen. Dick Durbin, D-Ill., the No. 2 Democrat in the Senate.

The delegation is also expected to attend a roundtable discussion with members of Congress. The visiting Syrian leaders include:

The visit comes as the opposition has grown more critical of the Obama administration's perceived lack of support.

“Statements of denunciation and condemnation bring hope but have done nothing to change the facts on the ground,” Akbik wrote in The New Republic on the three-year anniversary of the uprising on March 21. “Now is time for action, if not for the excruciating suffering that the Syrian people continue to face, for those values of the free world that are being defeated in Syria."

The opposition has been buoyed by reports that the US has begun to provide some anti-tank weapons, however. The Washington-based adviser described it as a “pilot program” the opposition hopes to see increased substantially.

Congress has joined the call for stepped-up involvement short of military intervention as the conflict enters its fourth year and al-Qaeda affiliated groups gain traction.

The House Foreign Affairs Committee voted unanimously last week to urge the Obama administration and the United Nations to stop recognizing Bashar al-Assad as the “rightful” ruler of Syria and to “redirect” humanitarian assistance directly to private aid groups. And Sen. Tim Kaine, D-Va., the chairman of the Senate Foreign Relations panel on Near Eastern and South and Central Asian Affairs and the author of his own Syria aid resolution, wrote to UN chief Ban Ki-moon on Friday urging him to bypass the regime and organize “large-scale cross border humanitarian assistance to those in need inside Syria.”

In other congressional news, the fallout from last week's announcement of a reconciliation attempt between Fatah and Hamas begins in earnest as the House Foreign Affairs panel on the Middle East holds a hearing Thursday on “what's next” for the peace process.

Witnesses include former Rep. Robert Wexler, D-Fla., who was the sole lawmaker to attend the signing of the 1998 Wye River Peace Agreement and one of two to travel to the International Court of Justice at The Hague in 2004 to oppose the Palestinian case against Israel’s construction of a security barrier. Wexler resigned from Congress in 2010 and now heads the S. Daniel Abraham Center for Middle East Peace.

On Wednesday, the committee's panel on Europe, Eurasia and Emerging Threats holds a hearing on “Assessing the Biological Weapons Threat.” Witnesses include Amy Smithson, a senior fellow at the James Martin Center for Nonproliferation Studies who has been particularly skeptical of Syria's commitment to rid itself of its chemical weapons.

Also Wednesday, the House Armed Services marks up its annual National Defense Authorization Act, which sets defense spending levels for fiscal year 2015. And the House Appropriations panel on State and Foreign Operations holds a budget hearing on US assistance to combat transitional crime. Assistant Secretary of State for International Narcotics and Law Enforcement Affairs William Brownfield and Luis CdeBaca of the State Department's Office to Monitor and Combat Trafficking in Persons are lasted to testify.

Finally, the Senate Committee on Commerce, Science and Transportation holds a hearing on efforts to attract 100 million visitors a year to the United States. America's tourism industry suffered a “lost decade” after the attacks of Sept. 11, 2001, partly because of restrictive visa policies.