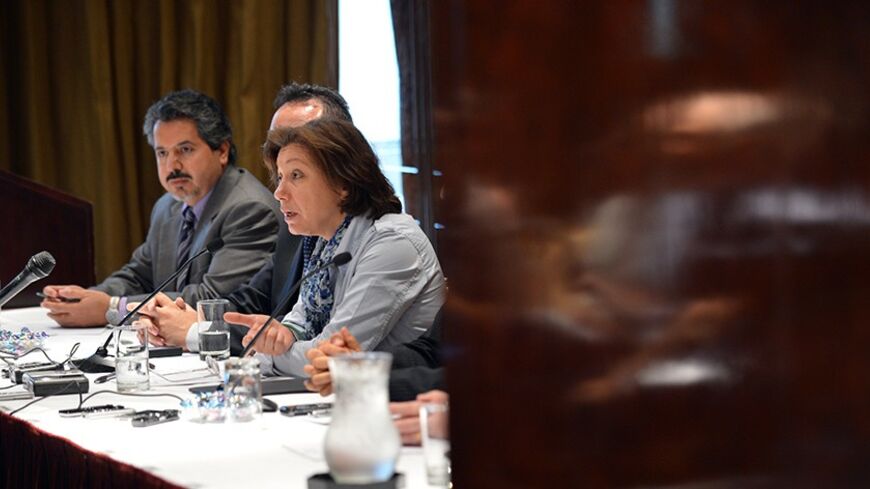 Syrian rebels are counting on Congress to help them make their case to the White House for more and better weapons when their leaders descend on Washington next month.

Despite setbacks on the ground, the Syrian Opposition Coalition is taking some solace from the bipartisan criticism of the Obama administration’s limited response to the conflict. The rebels hope the increasing calls for stepped-up action as the war enters its fourth year will boost coalition leader Ahmad Jarba’s request for anti-tank and anti-aircraft weapons when he visits Washington from May 7 to May 14.

“The administration has been using public opinion as an excuse not to do much,” Najib Ghadbian, the special representative to the US and the UN of the Syrian National Council (a member of the broader National Coalition of Syrian Revolution and Opposition Forces) told Al-Monitor in an interview ahead of Jarba’s visit. “We need that kind of pressure from the legislative branch for the executive to be more assertive in this conflict.”

Ghadbian points to the skewering of the State Department’s top Middle East official, US Assistant Secretary of State for Near Eastern Affairs Anne Paterson, at a recent Senate Foreign Relations Committee hearing and a bipartisan letter from nine top senators urging President Barack Obama to help the rebels with “shifting the stalemate on the ground” as reason for hope.

Ghadbian said Jarba may be accompanied by the new chief of staff of the Free Syrian Army’s Supreme Military Council, Brig. Gen. Abdul-Ilah al-Bashir, and is expected to meet with national security adviser Susan Rice — and perhaps even higher-ranking officials — during his visit.

“If there’s going to be a political solution we need to have the means to defend ourselves,” Ghadbian said. “The way you do it is by tipping the balance.”

He said the opposition is “not asking for US intervention, we’re not asking for total defeat of the other side” — but enough aid to convince Bashar al-Assad that he can’t win militarily. He said there must be consequences for reports the Assad regime is using barrel bombs and chlorine gas, in violation of the chemical weapons agreement with the United States and Russia and the recent UN Security Council resolution on humanitarian aid access.

“Basically we’re putting our friends before their responsibilities,” Ghadbian said.

Al-Bashir’s appearance will be key, said Oubai Shahbandar, a senior adviser to the coalition.

“This will be an important opportunity for the opposition to brief Congress on how the opposition Free Syrian Army has improved, how they provide a moderate alternative and how they can utilize US aid in a responsible and effective manner to fight both the regime and terrorists,” Shahbandar said.

Ghadbian said stalled legislation to arm the rebels from Rep. Eliot Engel, D-N.Y., the top Democrat on the House Foreign Affairs Committee, could provide a template for increased military aid. The CIA is already providing some limited arms assistance, according to numerous reports, but it has had to go through intermediaries.

“Make it public, turn it over to the DoD, why not?” Ghadbian said. “Coordinate it with the other countries – Saudi Arabia, Qatar. The significance of this is, if you’re worried about the various groups — and there are many in Syria — why don’t you get directly involved in making sure that you have oversight in training the people you’re willing to give these weapons to?”

He said a resolution from Engel and House Foreign Affairs Chairman Ed Royce, R-Calif., requesting that the Obama administration withdraw its legal recognition of the Assad regime would “send a message to Assad and his supporters that you can’t commit all these crimes — there are going to be consequences.” The committee is slated to mark up the resolution on Wednesday.

“This is one of the tools available to us that don’t cost much but are politically and symbolically significant,” Ghadbian said. “We need to be creative in isolating this regime.”

The committee is also scheduled to mark up a resolution from Rep. Chris Smith, R-N.J., chairman of the House Foreign Affairs panel on Africa, Global Health, Global Human Rights, and International Organizations, that calls for the establishment of a Syria war crimes tribunal.

“Any effort to weaken, to pressure those groups is very welcome,” he said. “One of the tools available to our allies is to try to curb the flow of weapons and fighters.”

Ghadbian said that effort also entails tackling Iranian weapons flows through Iraq, and taking a harder line against Russia. He accused President Vladimir Putin of creating an “alliance of dictators and thugs” with Assad and said Congress and the White House have an opportunity to check the Russian leader in Syria after he rolled into Crimea.

“I think a lot can be done vis-a-vis the Russians,” he said. “We see an opportunity in telling our friends that, 'Hey, you could get back at Putin in Syria.'”

The Obama administration has signaled a willingness to provide more military assistance to the opposition, including anti-tank weapons. While key members of the Senate Foreign Relations and House Foreign Affairs Committees have advocated more US arms to vetted Syrian rebels, the majority view in Congress, and among most Americans, at least until now, has been to avoid deeper military involvement in Syria.