Ahmad Jarba, president of the Syrian Opposition Coalition, tells a Washington audience that his group wants to set up an interim government in "liberated" areas but is being hampered by the Syrian regime’s use of barrel bombs and rockets. 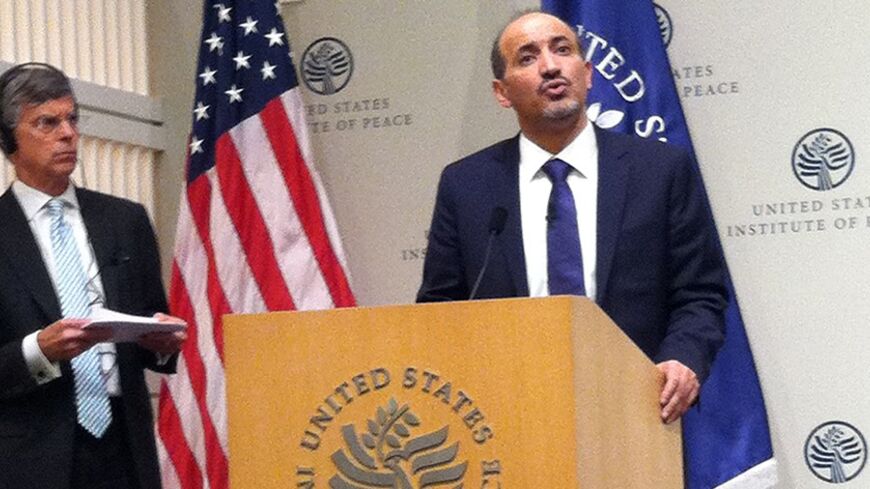 President of the Syrian Opposition Coalition Ahmad Jarba (R), speaks at the United States Institute of Peace as William Taylor, USIP’s vice president for the Middle East and Africa, looks on in Washington, May 7, 2014. - Barbara Slavin

Ahmad Jarba, president of the Syrian Opposition Coalition (SOC), appealed May 7 for “effective, efficient weapons” to counter the barrel bombs and other airstrikes used by the regime of Bashar al-Assad against the Syrian people.

But Jarba, on his first visit to Washington, did not specify which weapons — an apparent acknowledgment that he is unlikely to receive from the United States the portable anti-aircraft missiles known as MANPADS that the Syrian opposition has sought unsuccessfully for months.

The Obama administration has confined its publicly acknowledged support for the Syrian opposition so far to $287 million in nonlethal assistance and symbolic gestures such as the announcement on May 5 that it is conveying “foreign mission” status on the US offices of the SOC, a step short of formal diplomatic relations. The CIA is believed to have provided a limited number of anti-tank weapons to the opposition’s moderate military wing, the Free Syrian Army (FSA), through Jordan. The United States has also been the largest single donor of humanitarian aid to Syrian refugees and those displaced within the country. But Washington has balked at MANPADS, which potentially could threaten civil aviation and might wind up in the hands of Islamic extremists.

Jarba’s visit comes at a time when US policy toward Syria is in apparent disarray. Efforts to achieve a political solution collapsed in Geneva in February when Syrian officials refused to discuss formation of a transitional government. Instead, Assad has vowed to run in June for a third seven-year term as president — an action that Jarba derided Wednesday as “a farce.” While the FSA has made some progress against al-Qaeda-backed groups, public opinion polls show scant support for any Syrian faction. In a background call with reporters on Monday, a senior US administration official conceded that “the current conditions, the current asymmetry does not provide the kind of political calculus needed to get that type of negotiated, serious political process underway.” The official added that in Washington “there is probably no single issue … that is currently meriting as much debate, senior policy-level discussion and that kind of thing than Syria.”

Speaking at the US Institute of Peace (USIP) without notes, Jarba, a slight, unprepossessing figure who comes from the northern Syrian city of Qamishli and is a member of the Shammar tribe with branches in Iraq and Saudi Arabia, sought to counter the widespread impression that Assad’s forces are prevailing in a civil conflict that has killed more than 150,000 people and displaced nearly half of Syria’s population of Syria over the past three years.

“The situation is not as bad as some believe,” Jarba said in response to a question from William Taylor, USIP’s vice president for the Middle East and Africa. “In Homs, Deir el-Zor, Idlib, Aleppo and the coast, the opposition is gaining ground.”

However, as Jarba was addressing a full auditorium in Washington, opposition fighters were beginning to evacuate the city of Homs under a cease-fire agreement negotiated by the United Nations and Iran, a major backer of the Assad regime.

In response to a question from Al-Monitor as to whether his group would agree to negotiate with Iran to allow urgently needed food and medicine to reach Homs and other besieged cities and towns, Jarba said the Iranians would need first to agree that Assad must step down as part of a political transition, as called for at a conference in Geneva in 2012.

On the other hand, Jarba said, “if Iran will change its position, we are open to any peaceful initiative.”

Recognized by the United States as “the legitimate representative of the Syrian people” in December 2012, the SOC is based in Turkey. Jarba said the council is trying to set up an interim government in areas captured from the Assad regime and Islamic extremists. But “in these liberated areas … the air force of Assad bombards our people on a daily basis,” he said. “That stops us from making any progress in these areas.”

The SOC delegation, which includes Brig. Gen. Abdul-Ilah al-Bashir, head of the moderate opposition’s military wing, has met with Undersecretary of State Wendy Sherman and is due to see congressional leaders later Wednesday. On Thursday, they are scheduled to meet Secretary of State John Kerry.

Najib Ghadbian, the SOC representative in the United States, told Al-Monitor they were hoping to see President Barack Obama on Monday or Tuesday and would also be meeting with David Cohen, the undersecretary of the Treasury for terrorism and financial intelligence.

Jarba said he hoped while in the United States to correct the “misconception” of some Americans that his group has a Sunni Muslim sectarian agenda or is composed of terrorists. Qamishli, the town of his birth, is home to Arabs, Kurds, Circassians and Christians, he said, and he attended a Protestant school.

“Minorities existed [in Syria] before Bashar and will continue to exist after Bashar,” Jarba said, referring to the Christians, Alawites and other non-Sunni groups. “We are not terrorists. We are not mercenaries. We are part of the core of the Syrian people.” Terrorism, he said, is the product of the Assad government’s policies, which include freeing Islamic extremists from jail.

The Geneva II conference failed because of Assad, he said. “Geneva failed and now we are here in Washington to discuss with our friends how to revive a political solution. … There has to be a strong stance now against this bloodthirsty tyrant. This regime understands only the language of power.”