President Barack Obama intends to meet House and Senate leaders of both parties on Wednesday to discuss options. 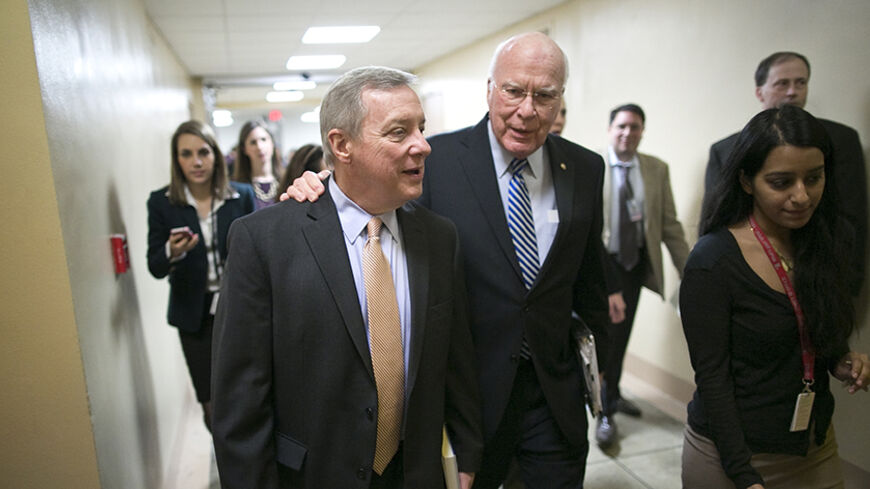 Sen. Dick Durbin (L) talks to Sen. Pat Leahy as they arrive for the weekly Democratic caucus luncheon at the US Capitol in Washington, Feb. 4, 2014. - REUTERS/Jonathan Ernst

President Barack Obama himself will meet with the House and Senate leaders of both parties at the White House on Wednesday to discuss "foreign policy issues, including the situation in Iraq," according to the White House. And administration officials are expected to brief the House Foreign Affairs and Armed Services committees on Wednesday, followed by the Senate Foreign Relations Committee on Thursday.

"There should be close consultations — they need to know where Congress stands in support of that, whether that be resources or any other authorities," Senate Foreign Relations Committee Chairman Robert Menendez, D-N.J., told Al-Monitor.

Menendez said there's "different views" on whether the administration would need to seek congressional approval for military action, including airstrikes. "It depends under what authorities and for what purposes," he said.

The administration says it has not made a determination but is considering "all options," short of boots on the ground.

Democrats acknowledged that military action will be a tough sell for their party, which broadly opposed the initial decision to go to war.

"Of course we're being careful — so is the president. He has not committed any troops to the situation," said Sen. Dick Durbin, D-Ill., the No. 2 Democrat in the Senate.

"The characterization of airstrikes — I would challenge that," Durbin told reporters describing the administration's consultations. "I don't think that's what's on their mind."

Sen. Patrick Leahy, D-Vt., the chairman of the Senate Appropriations panel that controls spending for the State Department, showed no interest in returning to Iraq.

"We ended up with a country worse off than to begin with, and with a leader — [Prime Minister Nouri al-] Maliki — who told us to get out. Some would say we ought to say 'thank you,'" Leahy told reporters. "Now we're saying we ought to get back in there, send troops in to do everything because there's a danger to us. Sounds to me very much like the same arguments we heard to go in there in the first place."

And Sen. Tim Kaine, D-Va., chairman of the Senate Foreign Relations panel on Near Eastern and South and Central Asian Affairs, questioned the administration's ability to go it alone.

"If it's heavy on the military side, that's Congress' role," Kaine told Al-Monitor. "If it's other kinds of things, the president can take some steps short off the full kinds of consultation."

Kaine said he talked to the White House on Monday about his "strong belief that this consultation is really important to do, and to do right. And they share that." He acknowledged, though, that in the case of an emergency, the White House could take action after merely consulting with congressional leaders.

Some Republicans are also skeptical.

"You may find people around here who are ready to jump in. I'm not there yet," Sen. James Risch, R-Idaho, the top Republican on Kaine's subcommittee, told Al-Monitor.

Others, however, said the administration could act without Congress.

"We gave him some very broad powers," House Minority Whip Steny Hoyer, D-Md., said on MSNBC. "We may want to consider those at some point in time, but I think he has the authority to act, yes."

The administration's suggestion of closer cooperation with Iran received some support.

"Especially partners in the region who have a real stake in de-escalating tensions rather than continuing to exacerbate them, of course we should be looking at ways to work together to de-escalate tensions — especially the sectarian nature of it," Kaine told Al-Monitor. "Partners in the region are going to be the best able to help us do that, so we ought to be open to partnerships."

Even Sen. Lindsey Graham, R-S.C., an Iran hawk, reiterated his support for the idea despite intense pushback from his colleagues.

"At the end of the day, I'm trying to find the best scenario to protect our people," Graham told reporters. "I don't want to slam the door on an approach that may be required to prevent another Benghazi," a reference to the 2012 attack in Libya that killed Ambassador Chris Stevens and three other Americans.

"In this moment in time, they have influence that may be used in a positive way to help Americans in harm's way," he said.

"They discussed the need to support inclusivity in Iraq and the need to refrain from pressing a sectarian agenda," Psaki said at her daily briefing. "In terms of where we go from here, we're open to continuing our engagement with the Iranians, just as we are engaging with other regional players on the threat posed by ISIL in Iraq."

Cooperation with Iran remains unpalatable for many members of both parties, however.

"I hope the administration is not thinking about engaging Iran," Menendez told MSNBC. "It was Iran that trained Shia militias in which many of our wounded warriors bear the scars of.