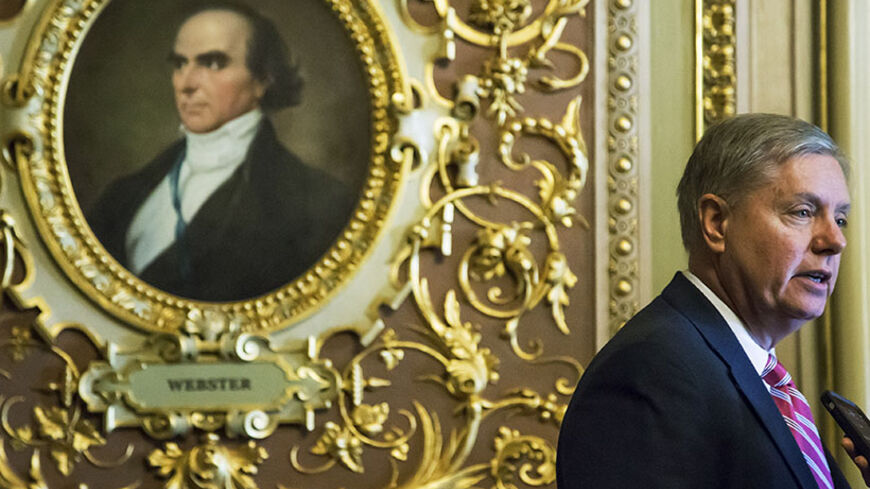 US Sen. Lindsey Graham, R-S.C., talks to a reporter after the weekly Republican caucus luncheon in Washington, May 6, 2014. - REUTERS/Jonathan Ernst

The Senate Appropriations panel overwhelmingly approved a $48.3 billion State and Foreign Operations bill on June 19 that cuts aid to Egypt and the Palestinians amid mounting congressional ire at the two pesky partners.

The panel voted 25-5 to approve a base bill that cuts aid to Egypt by $400 million, including a $300 million cut to the historic $1.3 billion annual budget for military aid.

And senators approved by voice-vote an amendment, first reported by Al-Monitor, to cut aid to the Palestinians by the amount paid to alleged terrorists in Israeli prisons and their families.

"We have to send Egypt a message," said Sen. Lindsey Graham, R-S.C., the top Republican on the State and Foreign Operations subpanel. "We're still engaging with Egypt, we still have funding for Egypt, but we're reducing their money because we want the Egyptian government to understand that democracy is important, and that we're looking and watching as to how you run your judiciary and how Egypt is evolving."

The cuts have been championed by subcommittee chairman, Patrick Leahy, D-Vt., the top critic of Egypt's human-rights record in Congress. None of the senators spoke up in favor of restoring the aid to its original amount.

The aid cut sets up a fight with the House, where the Appropriations subcommittee on State and Foreign Operations on June 18 approved a spending bill that keeps aid to Egypt intact. The full House committee will vote on the bill June 24.

The panel also voted unanimously on an amendment by Graham and Sen. Mark Kirk, R-Ill., to reduce funding for the Palestinians. The amendment mirrors language in the House bill.

Graham said the amendment would prevent "money paid for by the American taxpayer" to go to support acts of terrorism and their perpetrators.

A source close to the issue told Al-Monitor that the restriction could cut the annual $400 million in US aid to the Palestinians by about $70 million.

The amendment prompted a sharp exchange with Sen. Jon Tester, D-Mont., who asked why the United States should send any money to the Palestinians if some of it is going to support alleged terrorists.

"Why are we giving these guys any money?" Tester asked.

"Our Israeli friends and allies feel like we need to continue to engage in a productive fashion with the Palestinians," Graham said. "I think right now is not the time to withdraw what little leverage we have."

Tester answered that the situation in Iraq shows that "you can't buy your friends."

"I'm not trying to buy anybody's friendship; I'm trying to protect the country," an irritated Graham answered. "And if you think we should have no foreign aid, put an amendment in. Let's all vote on it, not just talk about it."

The Senate bill was supported by all Democrats and a majority of Republicans on the panel. Senate Minority Leader Mitch McConnell, R-Ky., and Appropriations ranking member Richard Shelby, R-Ala., voted no, along with Sens. Thad Cochran, R-Miss., Lamar Alexander, R-Tenn., and John Hoeven, R-N.D.