Members of both chambers are laying the groundwork for a post-July 20 push. 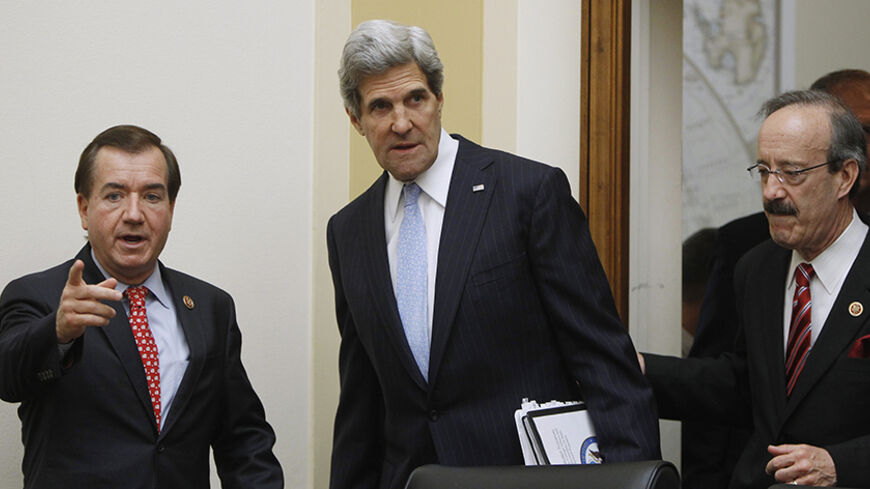 Congressional Republicans aren't waiting for the smoke signals out of Vienna to declare the Iran nuclear talks a failure.

Reacting to Tuesday's acknowledgment by Secretary of State John Kerry that negotiators may well need an extension, lawmakers in both the House and Senate began to make the case for punitive action as soon as the July 20 deadline is reached. While some called for an up-or-down vote on the deal, others argued for reinstating suspended sanctions or even enacting new ones.

"In light of Secretary Kerry’s comments today in Vienna that ‘very real gaps’ remain between Iran and the international community, my hope is that the Administration will finally engage in robust discussions with Congress about preparing additional sanctions against Iran," House Foreign Affairs Chairman Ed Royce, R-Calif., said in a statement.

Royce's comments refer to bipartisan sanctions legislation he drafted with ranking member Eliot Engel, D-N.Y., which cleared the House by a vote of 400-20 last July and has been stuck in the Senate since then.

Kerry's remarks in Vienna came shortly before he headed back to the nation's capital without a deal in hand, raising expectations that an extension would be needed, Al-Monitor's Laura Rozen reported from Vienna. He vowed to seek lawmakers' input first.

"I am returning to Washington today to consult with President [Barack] Obama and with leaders in Congress over the coming days about the prospects for a comprehensive agreement," Kerry said, "as well as a path forward if we do not achieve one by the 20th of July, including the question of whether or not more time is warranted, based on the progress we’ve made and how things are going."

Republicans senators made clear he'd get a rough welcome.

"July 20 was the date that they set," Sen. John McCain, R-Ariz., told Al-Monitor. "So unless there's some overwhelming reason not to, I think the sanctions that have been relaxed ought to be reimposed." McCain that he'd be "very supportive" of new sanctions as well.

"The sanctions were working, and I believe we should immediately reinstate the full sanctions regime that existed before the interim agreement and consider additional sanctions as well," Sen. James Inhofe, R-Okla., ranking member on the Armed Services panel, said in a statement.

Sen. Mark Kirk, R-Ill., said he expected support to build for the sanctions bill he introduced in December with Senate Foreign Relations Committee Chairman Robert Menendez, D-N.J., as well as more recent human-rights legislation he wrote with Sen. Marco Rubio, R-Fla. That first bill has been backed by 60 of 100 senators but Senate Majority Leader Harry Reid, D-Nev., has stopped it from coming up on the floor.

Sen. Lindsey Graham, R-S.C., told Al-Monitor that he planned to introduce legislation soon requiring a deal to come to Congress for approval. The proposal mirrors similar legislation introduced in the House by Rep. Trent Franks, R-Ariz.

"They're on the verge of making a historically bad deal, by giving Iran capacity to enrich uranium," said Graham, who worries that Iran's Sunni neighbors will inevitably respond by starting their own nuclear programs, adding to the instability in the region.

"I think [Obama administration officials] fear having to use military action to stop a breakout by Iran more than [they fear] a bad deal," Graham said. "That's what's driving this: The idea that a military option is on the table is just a myth."

Graham is also circulating a letter with Menendez laying out Congress's expectations for a final deal. These include giving international inspectors access to the country's nuclear program for at least 20 years and requirements that Iran "dismantle its illicit nuclear infrastructure, including the Fordow enrichment facility and the Arak heavy water reactor, such that Iran does not retain a uranium or plutonium path to a weapon."

The letter, which is expected to be sent to Obama on Wednesday, may not garner as many signatories as the 83 lawmakers who signed a similar missive in March. Sen. Tim Kaine, D-Va., signed the earlier letter but said he couldn't support this one. "We are so close to some potential announcement that I'm not signing on to anything until I see what happens," Kaine, the chairman of the Senate Foreign Relations panel on Near Eastern and South and Central Asian Affairs, told Al-Monitor.

Kaine said talk of enacting new sanctions or restoring existing ones as soon as July 20 rolls around was "premature."

"There isn't any reason we can't talk about this on July 22," he said. "Let's see what happens between now and July 20, let's hear what any proposal is and if we're close, were not close, we're close but we ought to take a little more time. I don't think we need to be racing ahead of it."

While opposing the idea of holding a formal vote of no-confidence on the deal, Kaine said Congress would inevitably get a vote on lifting sanctions, making current efforts to pass new legislation moot. He said the Obama administration should therefore endeavor to strike a deal that Congress can support.

"I think it's very important for the White House to do this in a way that they know we're going to be for it," Kaine said. "The consequences of the administration making a deal that the Senate would reject, even in part, are huge and negative."

While congressional lawmakers are giving US diplomats heartburn, parliamentarians in England are cheering the possibility of a diplomatic breakthrough, Barbara Slavin reported in Al-Monitor. The British House of Commons' Foreign Affairs Committee has endorsed a deal that would allow Iran to continue limited uranium enrichment, Slavin wrote.

"There is a widespread sense that the prospects for reaching a long-term settlement which would assuage fears about regional security are better than they have ever been,” said the British report. “We endorse the UK’s decision to take part in negotiations with Iran on its nuclear program through the framework of the Joint Plan of Action. … We acknowledge that there is probably no prospect of a lasting deal which does not allow Iran to enrich uranium.”