The Foreign Relations panel expects to soon vote on legislation that would give Congress a say over a nuclear agreement. 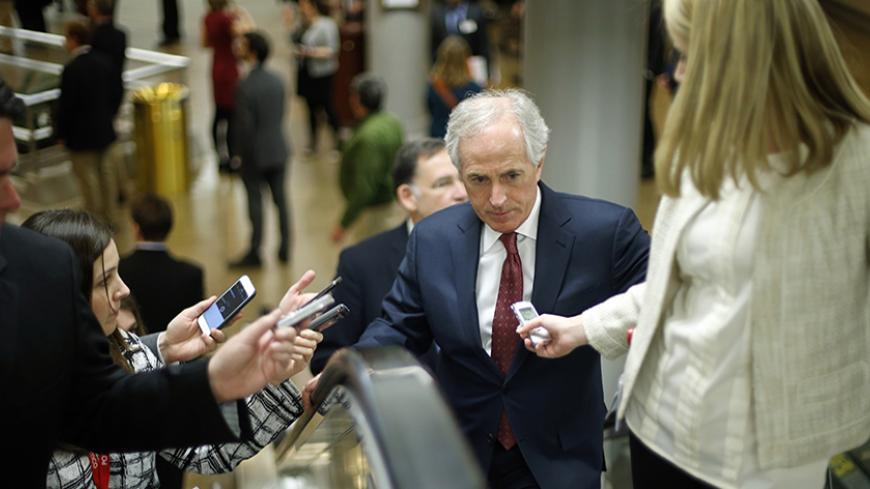 US Sen. Bob Corker, R-Tenn., speaks with reporters as he arrives for the weekly Senate Republican caucus luncheon at the US Capitol in Washington, Feb. 10, 2015. - REUTERS/Jonathan Ernst

Senate Foreign Relations Chairman Bob Corker, R-Tenn., hopes to have his committee vote on legislation giving Congress a say over a nuclear deal with Iran in the next few weeks, Al-Monitor has learned.

Corker is seeking a vote right after next week's recess, potentially setting up one more congressional showdown with the Barack Obama administration over Iran. The White House has vowed to veto any legislation that would force an up-or-down vote on a final deal, arguing that it would derail the ongoing multiparty talks.

"I hope to be in a position fairly soon after recess to do something on it," Corker said. One source close to the issue said a committee markup of the bill has been tentatively scheduled for the last week of February, but that may slip by a week as lawmakers focus on President Obama's war authorization request and other pressing matters.

Corker introduced legislation last year that would in effect have given Congress veto power over a final agreement, but he suggested Feb. 11 that the new bill may differ substantially. He told Al-Monitor that the mechanism by which Congress would weigh in was an "evolving concept" as he tweaks his bill to get more members of both parties on board, but that his goal remains "for the president to have to submit this to Congress."

"We are working to find a way for Congress to have its rightful role and ability to weigh in on this topic. And I'll just leave it at that, because it's evolving," Corker said. "We've had some interesting differing ways of looking at it that I think will make it more appealing."

The latest push comes just after the White House dodged a bullet last month when hawkish Democrats agreed to wait to see if there's a preliminary deal by the end of March before voting on a separate bill that would impose escalating sanctions on Iran if talks drag on. Supporters say that bill would strengthen the hand of negotiators' but opponents say it would cause Iran to leave the negotiating table.

Drafts have been circulating on Capitol Hill for more than a week as Corker seeks to line up bipartisan support, said a source tracking the issue closely. The chairman wants to avoid turning Iran into a purely partisan issue and may need extra Democratic votes to get the bill out of committee if Republican doves Rand Paul, R-Ky., and Jeff Flake, R-Ariz., vote against it.

One key Democrat that Corker has likely been talking to is Sen. Tim Kaine, D-Va., the former top Democrat on the Middle East panel and a champion of congressional power. Another is Sen. Robert Menendez, D-N.J., the top Democrat on the committee and a co-author of sanctions legislation that would kick in if there's no deal by the end of June.

"I think Congress has to weigh in on a final deal," Kaine said at a Jan. 21 hearing with administration officials.

"The only lever in this negotiation is the congressionally imposed sanctions regime," Kaine said at the time. "And … while limited waivers were certainly contemplated [in the sanctions legislation], I don't think a blanket suspension for a period of time was contemplated. And so, I do think it is very important for Congress to be able to weigh in on this deal, especially given the actor that we're dealing with."

The renewed push comes after members of the committee expressed heightened skepticism that an acceptable deal is at hand following a closed-door briefing with administration officials on Feb. 10. Corker and Menendez said they were worried that by leaving much of Iran's nuclear infrastructure in place, even with safeguards and oversight, a deal would make it easy for Iran to rip up the agreement and race toward a bomb in the future.

“We really are in a position of managing proliferation now with the country of Iran,” Corker told reporters after the briefing. "You’ve got a country that may be a screwdriver turn away from having a nuclear weapon. But in addition to that, they are going to have $130 billion [in frozen assets] available, and their economy will be growing. They will no longer be a rogue state.”

Corker introduced legislation last year that would submit a final deal to an up-or-down vote by a majority of Congress. He tried to attach the bill as an amendment to pro-Israel legislation last year, but Menendez, who was chairman while the Democrats were still in power, killed that effort.

So far this year, Corker has repeatedly said his latest effort would be modeled after so-called 123 agreements that govern civil nuclear cooperation agreements between the United States and other nations. Those agreements are subject to an up-or-down vote by Congress.

Powerful interests have lined up on both sides of the debate.

The Wall Street Journal published an editorial over the weekend that strongly argues in favor of lawmakers weighing in.

"Barack Obama’s Iran project is the outlier in the history of arms control," the Journal wrote. "His insistence that no one may interfere in his negotiations has only increased misgivings in Congress about the details."

And the hawkish Foundation for Defense of Democracies has taken the Obama administration to task for what it says is a propensity to preemptively blame Congress for a breakdown in talks if lawmakers do anything to harden the US position at this stage of the negotiations. The think tank argued in a piece this week that the negotiations' failure to curtail work on advanced centrifuges and ballistic missiles means congressional action is required to get a good deal.

The administration and its allies make several counterarguments in opposition to giving Congress veto power over the lifting of certain sanctions.

First, they argue that just passing a bill that calls for a congressional vote would hamstring US negotiators.

"In terms of the negotiations themselves, the knowledge that there would be very early on this kind of vote in our judgment could actually undermine the credibility of the commitments we would make in the context of negotiations to suspend [sanctions]," the State Department's No. 2 official, Antony Blinken, testified at the Jan. 21 hearing.

And if Congress does vote down a final agreement, diplomacy advocates assert, the talks would collapse and the United States would get the blame.

"There is no going back to the negotiating table," said Daryl Kimball, executive director of the Arms Control Association, which put out a report on Feb. 11 arguing that the "123" nuclear agreements are an inaccurate frame of reference. "It's a strategy that potentially drives us over a political and geostrategic cliff."

Furthermore, Kimball said, a congressional vote could force a "constitutional showdown" with the White House, which has claimed the executive power to temporarily suspend — but not permanently remove — sanctions. That would put any agreement in legal limbo for an indefinite amount of time.

Instead, his association supports the negotiators' strategy of suspending sanctions for a set amount of time — say one or two years — and only voting to remove them after Iran has complied with all its obligations during that interim period. At that point, Kimball and others argue, Congress will be more inclined to vote to remove the sanctions than they would be right after a deal is announced.

"There's a concern that if a judgment is reached immediately, yea or nay, on this, it may be too soon to judge whether Iran in fact has complied with its commitments," Blinken said at the Jan. 21 hearing. "I think giving the Iranians time to demonstrate clearly to you and to us that they're making good on their commitments would make sense."