Congress unmoved by Obama's call to back off Iran legislation

The Senate kicked off legislative debate while the House invited Israel's Netanyahu to weigh in. 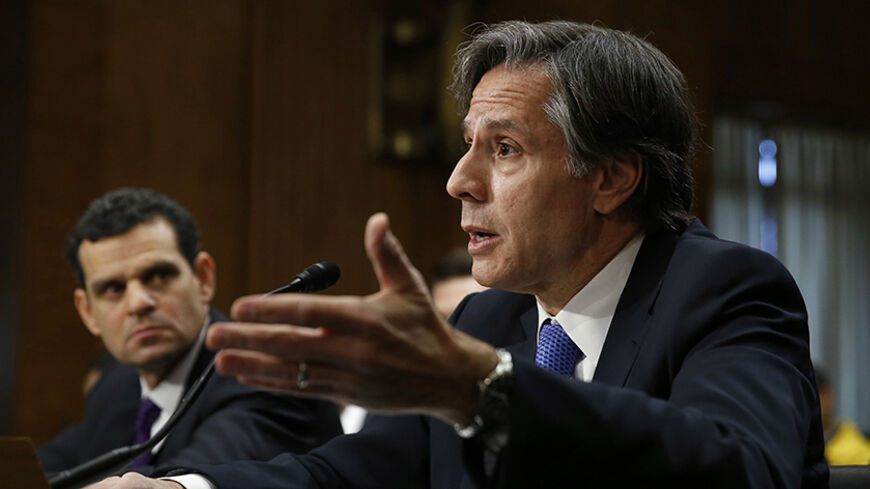 The Republican-controlled Congress made clear Jan. 21 that it remains determined to weigh in on the nuclear talks with Iran despite President Barack Obama's dire warning a day earlier.

House Speaker John Boehner, R-Ohio, invited Prime Minister Benjamin Netanyahu to address the threat from Tehran during a joint session of Congress on Feb. 11. And lawmakers on the Senate Foreign Relations Committee declared themselves unconvinced by administration officials' arguments for keeping Congress at bay during the first Iran hearing of the new year.

Separately, the House Foreign Affairs Committee adopted an oversight plan for the new Congress that prioritizes "pressuring Iran in order to stop Tehran's march toward nuclear weapons," according to Chairman Ed Royce, R-Calif. Royce and the top Democrat on the panel, Rep. Eliot Engel, D-N.Y., are working on their own Iran legislation, Al-Monitor first reported last week.

"I don't believe I'm poking anyone in the eye," Boehner told CNN about his decision to invite the Israeli leader in the midst of debate over new sanctions legislation. "There is a serious threat that exists in the world and the president last night kind of papered over it."

The announcement caused consternation at the White House, with spokesman Josh Earnest accusing Netanyahu of breaching protocol by not informing the White House ahead of time. The invitation comes one day after Obama vowed to veto bipartisan legislation calling for escalating sanctions if no deal is reached by July 6.

"New sanctions passed by this Congress, at this moment in time, will all but guarantee that diplomacy fails — alienating America from its allies; making it harder to maintain sanctions; and ensuring that Iran starts up its nuclear program again," Obama said during his Jan. 20 State of the Union speech. "It doesn’t make sense. And that's why I will veto any new sanctions bill that threatens to undo this progress."

Obama followed up by sending two top officials — State Department No. 2 Antony Blinken and Treasury sanctions chief David Cohen — to urge lawmakers to refrain from taking action for the moment. The two testified Jan. 21 that the administration opposes not only prospective sanctions but also proposed legislation from Foreign Relations Chairman Bob Corker, R-Tenn., that would require an up-or-down vote on a nuclear deal by Congress before sanctions can be lifted.

"The concern that we would have is, if we're saying that we're going to be suspending certain sanctions early on and yet that is still subject to an initial vote by the Congress in some fashion, they will doubt our ability to actually deliver on our commitment," Blinken said. "That's a concern that could make the negotiations more complicated."

Blinken added, however, that Congress would eventually have to weigh in to permanently repeal suspended sanctions after Iran complies with the requirements of a final deal for a certain period of time.

Corker said the administration's warnings that congressional action risked unraveling international support for the sanctions was a "red herring."

"I've talked to our international partners. Not a single one of them has any concern, whatsoever, with Congress having the ability to vote up or down on a final deal," Corker said. "Many of them believe it would strengthen our hand."

The co-author of that bill, Sen. Robert Menendez, D-N.J., had some of the harshest words for the two witnesses during the hearing. The Senate Banking Committee is scheduled to vote on his bill next week.

"The more I hear from the administration and its quotes, the more it sounds like talking points that come straight out of Tehran," said Menendez, who has repeatedly clashed with Obama over Iran. "And it feeds to the Iranian narrative of victimization, when they are the ones with original sin."

Sen. Marco Rubio, R-Fla., a prospective candidate for president in 2016, said Iranian leader Ali Khamenei believes in a "cataclysmic showdown" with the West that will usher in the new Mahdi. And Sen. Jim Risch, R-Idaho, said US negotiators were getting "scammed."

"I hope you come in here one day and say, 'you doofus, you had no idea what you're talking about,'" Risch said. "I don't think that's going to happen. These people are bad people."

Blinken countered that a deal would give monitors far greater access to the Iranian nuclear program than they have now.

Sen. Barbara Boxer, D-Calif., said she was "putting the finishing touches" on legislation with potential presidential candidate Rand Paul, R-Ky., that would require "swift action" if Iran doesn't live up to its commitments under a nuclear deal.

"Our bill in essence would allow expedited consideration by Congress of legislation to reinstate waived or suspended sanctions against Iran if the president, in consultation with the intelligence community, determines that Iran has violated any existing nuclear agreement," Boxer said.

Paul, however, made clear he thinks Congress should weigh in in the end.

"You have to sell us [a deal] because we're you're boss," Paul told Blinken. "We're your co-equal in this, not your subject."

And Sen. Chris Murphy, D-Conn., proposed a non-binding resolution stating "our clear intent upon the failure of negotiations … to enact the kind of crippling sanctions that we're beginning the discussion about." Blinken said that would be acceptable under the terms of the interim agreement with Iran and would be "consistent" with the administration's negotiating strategy.