Legislation from the Senate Foreign Relations chairman would authorize — but not require — Congress to weigh in before sanctions can be lifted. 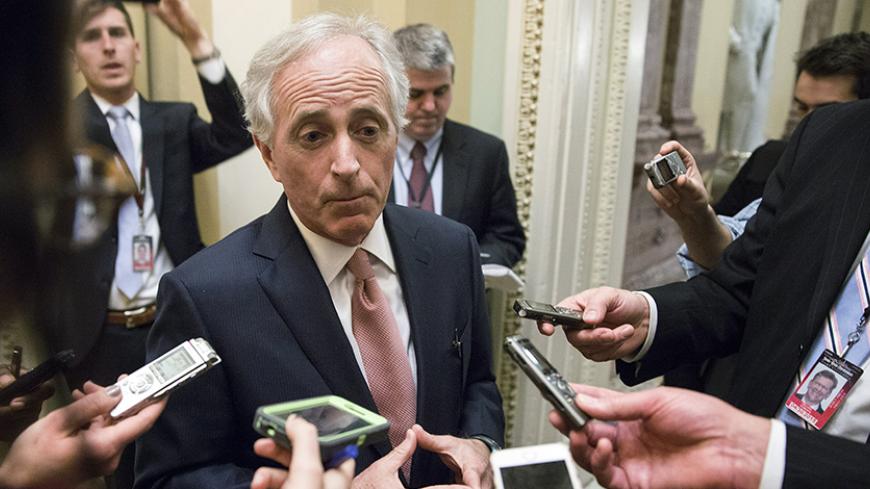 WASHINGTON — Legislation introduced the evening of Feb. 27 on Capitol Hill would enable — but not require — Congress to vote on an Iran nuclear deal.

The bill from Senate Foreign Relations Committee Chairman Bob Corker, R-Tenn., creates a mechanism for an up-or-down vote but would allow sanctions relief to go forward if Congress doesn’t act, according to a copy obtained by Al-Monitor. It would also block any new sanctions relief beyond that agreed to in the November Joint Plan of Action for 60 days while Congress reviews the deal.

The White House has promised to veto such legislation, saying it would hamstring negotiators if Iran doesn’t think they can deliver on their commitment to lift sanctions.

In addition, the bill would require President Barack Obama to certify that any deal he reaches with Iran would only allow nuclear activities that meet US nonproliferation objectives and aren’t “inimical” to US national security. Going forward, it would force the president to report to Congress every six months on Iran’s nuclear program and its compliance with a final deal.

Every three months, the president would have to certify that Iran has not materially breached the agreement, taken any action to “significantly advance its nuclear weapons program,” or “directly supported or carried out” terrorism against the United States. The bill creates a process for expediting the reinstatement of sanctions in the House and Senate if the president fails to certify.

Critics say several of those provisions could derail the talks.

“The Corker proposal if approved by Congress and signed by the president would lead to an up-or-down vote even if it is not required by the bill,” said Daryl Kimball, executive director of the Arms Control Association. “If some Democrats think that makes the proposal more reasonable, I have a bridge in Brooklyn to sell you.”

He also raised concerns with other aspects of the bill.

“The bill would put on hold the implementation of a comprehensive agreement for 60 days and probably far more. This delays Iran taking key steps that would reduce its proliferation potential,” Kimball said “Additionally, it blocks the President's existing legislative authority to waive certain nuclear-related sanctions at the onset of an agreement. This part of the bill alone creates the possibility that it might fall apart.”

Corker’s office did not respond to requests for comment.

The Corker bill is one of two main congressional efforts from critics of Obama’s nuclear negotiations.

Another bill calling for new sanctions if there’s no deal by July cleared the Senate Banking Committee last month but is on ice, with Democrats pulling their support until the March 24 deadline for a political framework agreement.

Editor's note: This piece has been updated since its initial publication.