Key lawmakers kept an open mind on a potential extension of nuclear talks with Iran on their first day back after midterm elections. 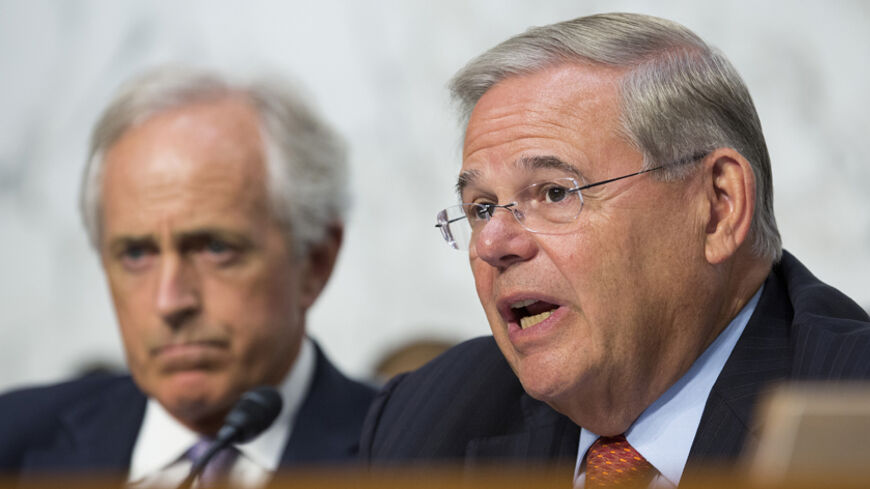 Key US lawmakers are adopting a wait-and-see approach to new sanctions on Iran, buoying nuclear deal advocates' hopes that the nuclear talks may yet survive the Republicans' midterm victory.

In a joint Nov. 12 statement, the bipartisan architects of pending sanctions legislation indicated that they would wait to see what a "potential deal" looks like before acting. In addition, the chairman-in-waiting of the Senate Foreign Relations Committee, Sen. Bob Corker, R-Tenn., appears open to a further extension of the talks past the Nov. 24 deadline, as seems increasingly likely.

"Why don't we wait until the 24th to start talking about alternatives," Corker told Al-Monitor and a handful of other reporters Nov. 12. "Let's see what actually occurs over the course of the next couple weeks."

"If there's no extension and no deal, absolutely you would want to add sanctions. [But] I would find it difficult to believe at this moment that there will just be a walkaway from the table on the 24th. My sense is that there will be either an extension or a deal, and if that's the case, we can weigh what that extension says," Corker stated. "Always, I want to see what a document says [before acting]."

Corker's comments followed similar signals from current committee chairman Robert Menendez, D-N.J., and Mark Kirk, R-Ill., whose sanctions bill has garnered 60 co-sponsors but has been blocked from coming to the floor all year by outgoing Majority Leader Harry Reid, D-Nev.

"As co-authors of bipartisan sanctions laws that compelled Iran to the negotiating table, we believe that a good deal will dismantle, not just stall, Iran’s illicit nuclear program and prevent Iran from ever becoming a threshold nuclear weapons state," they wrote. "This will require stringent limits on nuclear-related research, development and procurement, coming clean on all possible military dimensions (PMD) issues and a robust inspection and verification regime for decades to prevent Iran from breaking-out or covertly sneaking-out. Gradual sanctions relaxation would only occur if Iran strictly complied with all parts of the agreement. If a potential deal does not achieve these goals, we will work with our colleagues in Congress to act decisively, as we have in the past.”

Despite the statement's hawkish tone, deal advocates took solace from its commitment to let the current round of talks run its course.

"This statement is bad news for those pushing for pre-Nov 24 deadline movement on Iran bills," tweeted Dylan Williams, director of government affairs for the liberal, pro-Israel group J-Street. Williams later told Al-Monitor via e-mail that he thought the statement, which makes no mention of zero enrichment, "left the door open pretty wide to domestic enrichment."

Others thought, or hoped, they saw a hint of daylight between Menendez and Kirk.

"The statement is somewhat vague, but the [insistence] on dismantlement continues to put Kirk and Menendez in the camp of those pushing for unrealistic demands that can scuttle the deal," wrote Trita Parsi of the National Iranian American Council in an email to Al-Monitor. "But the statement is at times contradictory, calling for dismantlement on the one hand and then a new emphasis on inspections and verification on the other. If anything, it seems to indicate that Kirk and Menendez have a harder time putting themselves on the same page."

Still, Republicans, and many Democrats, remain adamant that they won't hesitate to slap new sanctions on Iran if diplomats negotiate what they consider a "bad deal." President Barack Obama has vowed to veto such legislation while talks continue, which would require a two-thirds majority in the House and Senate to overrule, but passed up a chance to further normalize relations with Iran and renewed a decades-old "national emergency" on Nov. 12.

Separately, Sen. Lindsey Graham, R-S.C., an Iran hawk, was expected to push for a vote Nov. 13 on Corker's legislation calling for an up-or-down vote on any final nuclear agreement and would ban funding for its implementation if Congress votes it down. Reid is seen as unlikely to allow such a vote, however, delaying any congressional action until Sen. Mitch McConnell, R-Ky., takes over in January.