US House preps its own Iran sanctions bill

The lower chamber says it won't just pass whatever bill the Senate comes up with. 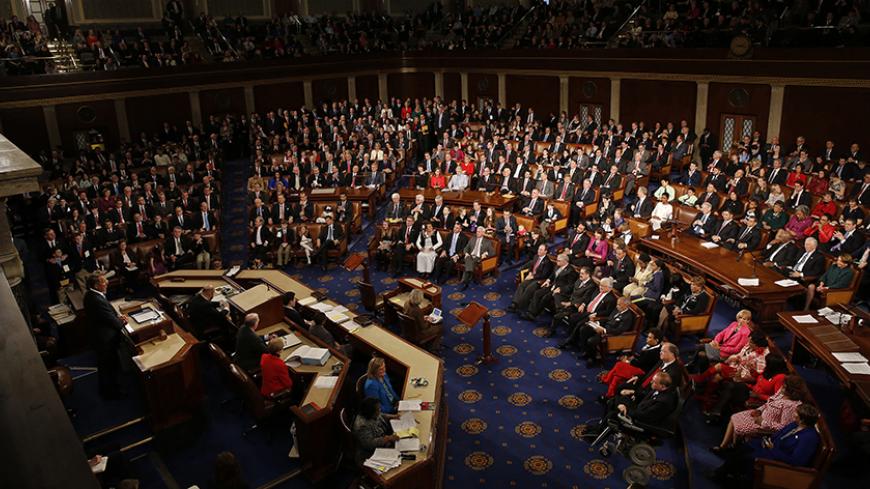 The US House of Representatives has begun working on its own Iran sanctions bill rather than simply agreeing to pass whatever the Senate comes up with, Al-Monitor has learned.

The dual-track effort presents an additional challenge for the White House, which has repeatedly warned Congress that new sanctions could derail nuclear talks. It could, however, end up buying time for negotiators to strike a final agreement, since both chambers must pass the same bill for legislation to become law.

"We feel very strongly that the House needs to play an important role, not just rubber-stamp whatever the Senate decides to do," the top Democrat on the House Foreign Affairs panel, Rep. Eliot Engel, D-N.Y., told Al-Monitor. "So we're going to put our heads together [with Chairman Ed Royce, R-Calif.] and see what's the best way to proceed."

The two lawmakers are expected to hunker down next week to decide on a strategy for moving forward, Engel said. Separately, Royce told Al-Monitor that he was planning to sit down Jan. 15 with Senate Foreign Relations Committee Chairman Bob Corker, R-Tenn., for an update on the Senate strategy.

"We're in a stronger position in the House," said Royce, pointing out that the House passed legislation he co-authored with Engel on a 400-20 vote shortly before negotiations began in 2013.

The budding House talks come as the Senate is expected to introduce its own sanctions bill within days.

The Senate bill is modeled after 2013 legislation from Sens. Robert Menendez, D-N.J., and Mark Kirk, R-Ill., that would have triggered new sanctions on Iran's energy sector if the country didn't agree to a nuclear deal that's acceptable to Congress. The two senators are said to have significantly reworked their legislation in a bid to sign up a veto-proof majority of 67; it now requires a deal by this summer, but without mandating the specifics.

In a sign of how quickly things are moving, the Senate Banking Committee, which would have jurisdiction over such legislation, has announced a hearing Jan. 20 on the "perspectives on the strategic necessity of Iran sanctions."

Menendez and Kirk hope to get most of the remaining 10 Democrats who originally co-sponsored their bill back on board as well as Senate Minority Leader Harry Reid, D-Nev., according to sources close to the issue.

The buzz in the Senate hasn't escaped the Obama administration's attention as negotiators prepare to reconvene in Geneva.

"The President … underscored the importance of our diplomatic efforts aimed at preventing Iran from obtaining a nuclear weapon," the White House said in a read-out of the meeting, "reiterating his strong opposition to additional sanctions legislation that could derail the negotiations and isolate the United States from our international coalition."

Still, the passage of new sanctions remains a top priority for many House and Senate members who say they're wary that Iran is just playing for time following repeated extensions of the talks.

"I believe that sanctions have brought Iran to the bargaining table," Engel told Al-Monitor. "I respect and understand the White House arguing that sanctions — even triggered sanctions — could be counterproductive or even harmful. That's their judgment. It's not necessarily mine."

He said he wants Congress to play a "constructive, not destructive" role in pressuring Iran, and that any House bill would be crafted in such a way to promote a good outcome.

"There have been good things that have come out of these negotiations," Engel said. "There is more inspecting than ever before; Iran has to some extent slowed down its full-steam-ahead of pursuing a weapon. But this can't be in perpetuity: At some point, you've got to make a deal or not make a deal. You can't keep kicking the can down the road, and I think we're at that point now. I believe it's rapidly coming to the time when our people are going to assess whether a deal is doable or not or whether the Iranians are just stringing us along."

Neither lawmaker ventured a timeline for when a House bill might be unveiled. But others said it could make sense to have it ready in time for the annual conference of the pro-Israel American Israel Political Action Committee (AIPAC), which kicks off March 1.

"It's just a matter of time on the floor and getting the administration to back off some of their pressure, because not everybody's as strong as Eliot Engel — not everybody is going to stand up to the president and say the time for sanctions is now," said Rep. Ileana Ros-Lehtinen, R-Fla., chairwoman of the House Foreign Affairs panel on the Middle East. "I'm hoping that with the AIPAC policy conference coming up, that that's going to be a new impetus."

AIPAC has made passage of new sanctions a top priority for the new Congress after backing off its initial push for the Menendez-Kirk bill following intense White House pressure last February.

"After more than a year of intensive diplomacy and limited sanctions relief, the time has come to strengthen sanctions on Iran," AIPAC said in a Nov. 25 memo to supporters. "The Obama Administration should toughen sanctions enforcement, and Congress should quickly take up new bipartisan sanctions legislation."

That message is getting through even to some strong advocates of diplomacy with Iran.

Rep. Gerry Connolly, D-Va., a member of Royce's committee, opposed a 2013 resolution on Iran negotiated between then-Majority Leader Eric Cantor, R-Va., and Minority Whip Steny Hoyer, D-Md., that collapsed after Hoyer withdrew his support. But now he says he could be open to voting for whatever Royce and Engel come up with — if it's finely crafted.

"The argument against [the 2013 resolution] was, why would you want to kill [negotiations] in the crib?" Connolly said. "Well, it's not in the crib anymore. We've had to have an extension. It's not clear what that extension has got us. The delay gives credence to the argument that perhaps the Iranians are just playing for time. And that ain't what we want to do."

"And so maybe what you need to get Iran to the table is not only a precipitous drop in the price of oil, but tougher sanctions," Connolly added. "That's the argument, and I think it has more salience today."

Still, he said, the political compromises needed to get a bill through Congress means legislation often ends up being a "crude weapon."

"Nuance and diplomacy are not our strong suits," Connolly said. "My concern has not changed that with the best of intentions, Congress interposes itself in a way that precipitates Iranian walk-away. And I don't think the world is safer if that happens."

Editor's note: This story has been updated to clarify that the pending Senate bill does not require a nuclear deal to meet specific criteria.