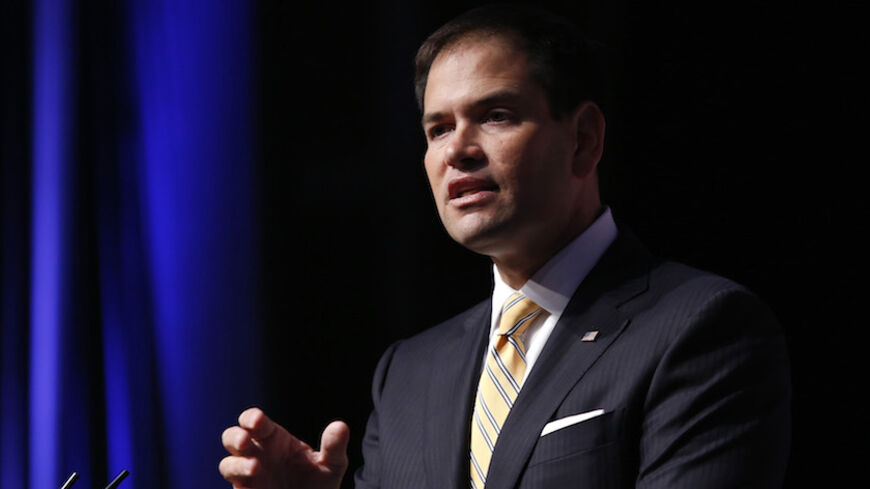 The new Republican-controlled Congress will likely start 2015 by demanding an up-or-down vote on any nuclear deal with Iran, a leading Senate hawk told US public radio.

Sen. Marco Rubio, R-Fla., told NPR he's "prepared to vote for additional sanctions today." But he predicted that Congress would instead initially demand a say, with more sanctions to come if a deal doesn't meet lawmakers' expectations.

"Probably the first vote in my sense will be something that will require any deal to come before Congress for approval, the way a treaty would," Rubio told the "Morning Edition" program in a year-end interview scheduled to run on New Year's Day. "That's my sense of where we would initially go."

Rubio, a potential candidate for president in 2016, said he would personally prefer to pass new sanctions immediately, despite President Barack Obama's warning that doing so could derail international negotiations. Rubio said he thinks the Iranians are just stalling for time, but he acknowledged that many of his colleagues would prefer taking a wait-and-see approach.

"Some of my colleagues certainly have expressed to me that they would rather pass a bill that does two things: One, it requires congressional approval, which I also support; and two, would trigger sanctions upon a failure of a deal some point over the next six months," Rubio said. "Additional sanctions would probably be triggered as being put in by a failure to reach an ultimate agreement."

"That's my sense of how things are shaping up," he said. "Of course there are other opinions here about how we should move forward."

The bill would bar the White House from reducing sanctions as part of a deal with Iran if Congress adopts a joint resolution of disapproval.

Others favor immediate action on legislation that would reinstate sanctions if Iran doesn't agree to tough restrictions that the Iranians have shown no indication that they would accept. That bill was introduced in December 2013 by Sens. Robert Menendez, D-N.J., and Mark Kirk, R-Ill., and garnered 59 co-sponsors but never came up for a vote while Democrats still controlled the Senate. Both bills would first have to be reintroduced in the new Congress.

“I have 17 Democrats with me," Kirk told Fox News in a Dec. 28 interview. "We have a shot at even getting to a veto-proof majority in the Senate. That's what we'll be working on, a good bipartisan vote.”

The incoming Senate majority leader, Mitch McConnell, has also indicted he wants a quick vote but hasn't made clear which piece of legislation he prefers to act on first.

“What we ought to do, if we can’t get an acceptable agreement with the Iranians, is tighten the sanctions,” McConnell, R-Ky., told reporters while campaigning in western Kentucky in November. “In fact, we had a bill in the Senate to do that which the current majority leader wouldn’t allow a vote on. … That’s the kind of thing a new Senate would be voting on.”

Rubio agreed that Iran hawks will have enough votes to override any presidential veto, which Obama has repeatedly threatened to use if he thinks legislation would imperil talks that he hopes could be a historic diplomatic achievement of his presidency.

“There are some issues where he won’t be able to do that on, for example sanctions on Iran," he told NPR's Steve Inskeep. "I think we’ll have a supermajority — a veto-proof majority — to impose additional sanctions on Iran and to require the president to come before Congress for approval of any deal."

He said the Iranians are using the talks as a smokescreen and that Congress has waited long enough.

"I'm fairly confident that the Supreme Leader [Ayatollah Ali Khamenei] in Iran and others around him have made the decision that the purpose of these negotiations [was] to buy time, to make progress on their nuclear program and to lift as many sanctions as possible or suspend as many sanctions as possible without agreeing to any irreversible concessions," Rubio said. "We've waited now for … over a year and no serious progress has been made and on the contrary a number of concessions have been made by the United States — including concessions that weaken a United Nations resolution against Iran, a resolution that said they have no right to enrich or reprocess."

Asked if he was worried about unraveling the reductions in enriched uranium that Tehran has already put in place as part of interim steps in the ongoing talks, Rubio said no.

"How much they have enriched today is not really the most important point; the most important point is do they retain the ability to enrich and reprocess?" Rubio said. "Because if they retain the ability to enrich and reprocess — if they maintain the equipment and the technology and the know-how to do that — then at some point in the next three, or four or five years, when the attention of the world moves somewhere else, they could easily use that exact same machinery and infrastructure to break the deal and move forward. That's how North Korea did it."