Senate passage of congressional review legislation presages a bitter vote over Iran negotiations in the event of a final deal. 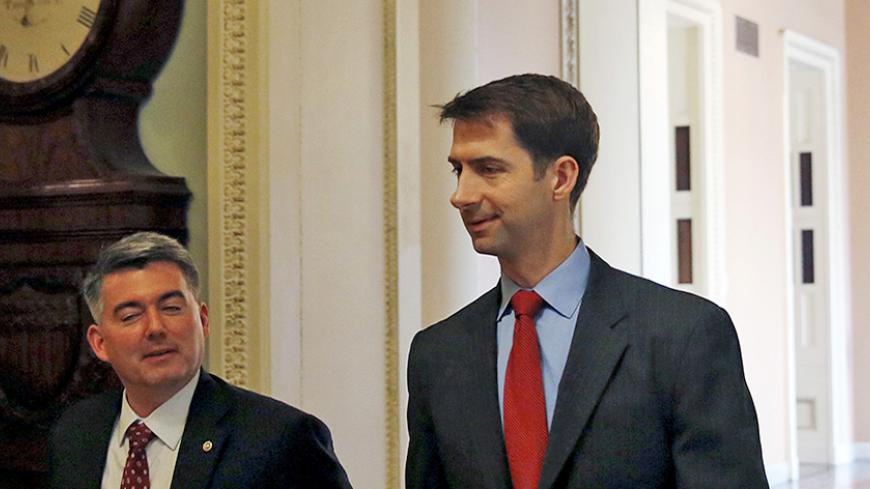 Sen/ Tom Cotton (R), R-Ark., walks next to an unidentified man as he goes to the Senate floor for a cloture vote on Capitol Hill in Washington, May 7, 2015. - REUTERS/Gary Cameron

The Senate's overwhelming approval May 7 of bipartisan legislation to review the Iran talks masks a deep partisan fissure that's almost guaranteed to crack wide open over the summer.

Even as the bill's Republican and Democratic co-sponsors held a joint news conference celebrating the 98-1 passage of their bill, lawmakers on both sides of the issue were busy gearing up for a tough fight over what comes next. Republicans all but promised to hold an up-or-down vote to lift sanctions if there's a final deal, while liberal Democrats scrambled to demonstrate that they have the votes to uphold a presidential veto if it comes to that.

"Make no mistake that this will not be the end of the story," Majority Leader Mitch McConnell, R-Ky., vowed on the Senate floor.

Sen. Tom Cotton, R-Ark., was the only senator to vote against the legislation, which the House is expected to take up as early as next week. He has publicly spoken of his desire to force negotiators to start over, with more stringent conditions placed on Iran.

"A nuclear-arms agreement with any adversary — especially the terror-sponsoring, Islamist Iranian regime — should be submitted as a treaty and obtain a two-thirds majority vote in the Senate as required by the Constitution. President Obama wants to reverse this rule, requiring opponents to get a two-thirds vote to stop his dangerous deal," Cotton said in a statement. "Congress should not accept this usurpation, nor allow the president any grounds to claim that Congress blessed his nuclear deal."

The legislation from Senate Foreign Relations Committee Chairman Bob Corker, R-Tenn., gives Congress 30 days to review a final deal and hold a vote to approve or reject it. Not acting would amount to a tacit endorsement of the negotiations, something Republicans say would be unacceptable.

"The American people, and their elected representatives, will be able to look at the content of the agreement, debate the consequences, and vote as to whether or not it's a good deal for the United States," said Sen. Lindsey Graham, R-S.C., who helped write the legislation.

A resolution of disapproval would block President Barack Obama from lifting sanctions, which the White House has warned could unravel a final deal.

Obama would almost surely oppose such a resolution, prompting House Democrats to send the president a letter May 7 vowing not to "abandon negotiations or cause their collapse." The letter, spearheaded by Reps. Jan Schakowsky, D-Ill., Lloyd Doggett, D-Texas, and David Price, D-N.C., was signed by 151 House members, more than the one-third needed to uphold a presidential veto.

"Today’s House letter, while in no way committing its signers to any specific position with respect to a final deal, nonetheless signals that there may well be sufficient support for a deal in Congress to prevent any such veto override," the pro-diplomacy group Americans for Peace Now wrote in a blog post welcoming the letter.

The White House initially opposed the Corker bill but changed its stance after the review time was shortened and Democrats flocked on board, making a veto impossible. The administration, however, has made clear that it will not allow Congress to interfere in negotiations, going so far as to publicly paint advocates of more sanctions as war-mongers — rhetoric that could well re-emerge as debate heats up this summer as the June 30 deadline for a final deal approaches.

Republicans have signaled that they know they don't have the votes to override a veto. Rather than schedule a difficult and ultimately doomed vote on disapproval, which would put them on the record as pro-actively trying to undermine a final deal, they are considering instead a resolution of approval that's destined to fail but would publicly demonstrate the lack of congressional support for Obama's diplomacy.

"There's a couple ways that you can look at it," Corker told reporters after the vote. "A resolution of disapproval would stop the deal if you were successful. If the majority of people in the Senate thought that the deal was not a good one, but you didn't have enough votes to disapprove, you could move to a resolution of approval."

McConnell suggested last week that this might be his intention.

Congress may also decide to hold two votes: one on approval, and another on disapproval.

"There will definitely be a vote," a senior Republican aide told Al-Monitor. "The question is, on what?"