Republicans won't let a veto threat stop them from voicing their opposition. 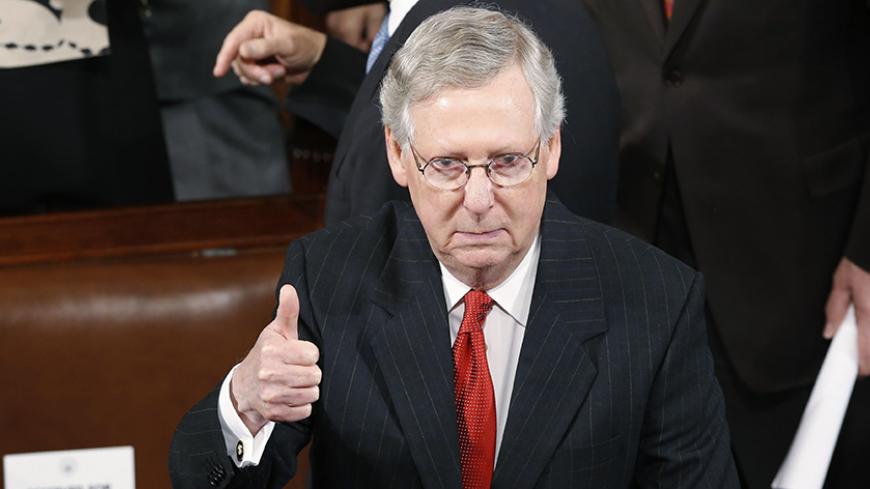 US Senate Majority Leader Mitch McConnell, R-Ky., gestures to a colleague before a joint meeting of the US Congress on Capitol Hill in Washington, April 29, 2015. - REUTERS/Jonathan Ernst

Congress has yet to approve the process for reviewing a final deal with Iran, but already Republicans are plotting their next move.

Legislation from Sen. Bob Corker, R-Tenn., now being debated on the Senate floor would give lawmakers three options: approve the deal, reject it or do nothing — a tacit endorsement. Rejecting a deal would bar President Barack Obama from lifting congressional sanctions and would almost certainly draw his veto, but many Republicans say they expect their leadership to push for a vote nonetheless.

"The whole point of the [Corker] bill is to eventually have the Senate express its will on Iran," said Sen. Mark Kirk, R-Ill., the author of separate sanctions legislation.

Sen. Jim Risch, R-Idaho, the chairman of the Senate Foreign Relations panel on the Near East, said it's a foregone conclusion that Congress will take some kind of action once Congress passes the Corker bill. The Senate is expected to vote May 7, with the House following suit shortly thereafter.

"When you ask someone to marry you, you don't say: ‘And do you think you'll enjoy the marriage?’" Risch said. "I think it's understood by everybody that if this passes, there's going to be a vote of some kind — either of approval or disapproval — on the deal."

Democrats, however, beg to differ.

"I'm a strong supporter of the current bill, which defines that Congress has to have a review role and here's what the various options mean," said co-sponsor Tim Kaine, D-Va. "But if we decide to take no action under the bill, that is approval — it's congressional approval to start [lifting sanctions]."

That's exactly what Republican critics of the negotiations are worried about. While many of them pushed for a vote on the Corker legislation, they're also well aware of how difficult it could be to pass a resolution of disapproval over Democrats' objections during the 30-day window that Congress has to review the deal, much less one that musters the 67 votes needed to override a presidential veto.

Republicans have another option, however: introducing a resolution of approval of the deal, and gleefully watching it fail. Senate Majority Leader Mitch McConnell, R-Ky., in fact has already suggested that may be exactly what he plans on doing.

"The Iran Nuclear Agreement Review Act will ensure Congress gets a vote either to approve or disapprove of the comprehensive agreement," McConnell said on the Senate floor April 30.

Such a vote, McConnell went on, would be a signal not just to Obama but "so will the president’s successor want to consider Congress’s view of any comprehensive deal."

A White House failure to garner broad support for its Iran diplomacy could also deal a blow to Hillary Clinton, Obama's first secretary of state and the Democratic front-runner for the 2016 presidential election. Clinton has offered cautious support for the talks — "diplomacy deserves a chance to succeed," she said in a short statement after Obama announced a political framework agreement last month — but will be pressed to take sides if a final deal is reached.

"Almost any dissent feeds into that debate," Risch said. "I suspect that if there isn't unanimity shown [for a final deal], or close to unanimity shown, it certainly will rise to the top as an issue in the campaign."